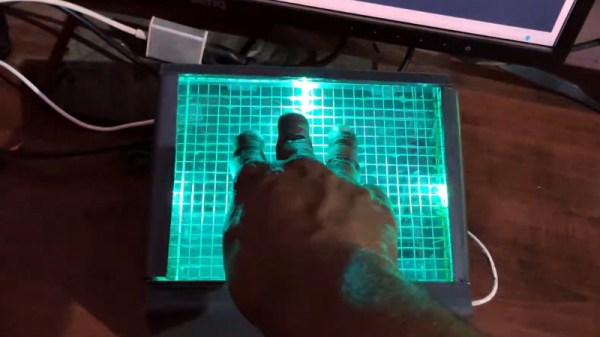 This multi-touch touch panel built by [thiagesh D] might look like it came from the retro-futuristic worlds of Blade Runner or Alien, but thanks to a detailed build video and a fairly short list of required parts, it could be your next weekend project. 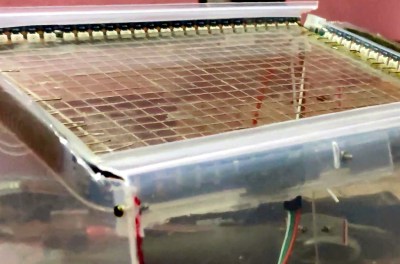 The build starts with a sheet of acrylic, which has a grid pattern etched into it using nothing more exotic than a knife and a ruler. Though if you do have access to some kind of CNC router, this would be a perfect time to break it out. Bare wires are then laid inside the grooves, secured with a healthy application of CA glue, and soldered together to make one large conductive array. This is attached to a capacitive sensor module so it’ll fire off whenever somebody puts a finger on the plastic.

With RGB LED strips added to the edges, you could actually stop here and have yourself a very cool looking illuminated touch sensitive panel. But ultimately, it would just be a glorified button. There’s plenty of interesting applications for such a gadget, but it’s not going to be terribly useful attached to your computer.

To turn this into a viable input device, [thiagesh D] is using a Raspberry Pi and its camera module to track the number and position of fingertips from the other side of the acrylic with Python and OpenCV. His code will even pick up on specific gestures, like a three finger drag which changes the colors of the LEDs accordingly in the video below. The camera’s field of view unfortunately means the box the panel gets mounted to has to be fairly deep, but if recessed into the surface of a desk, we think it could look incredible.

Custom multi-touch panels have been a favorite project of hackers for years now, and we’ve got examples going all the way back to the old black and white days. But larger and more modern incarnations like this one have the potential to change how we interface with technology on a daily basis.

END_OF_DOCUMENT_TOKEN_TO_BE_REPLACED 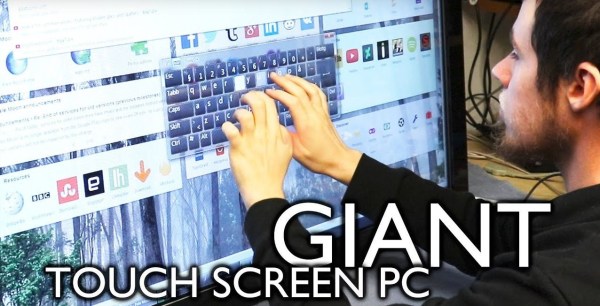 We’re slowly moving in the direction where everyone will have a touch screen desk like in the 1982 TRON movie or in the 1987 Star Trek: The Next Generation series with its ubiquitous touchscreen starship controls. [FFcossag] lucked into that future when a local company offered him an industrial 42″ multitouch PC that they were throwing out. A few hacks later and he has us all suitably envious.

Before hacking away though, he had to take care of some magic smoke. The source of this turned out to be yellow goop on the PC’s power supply that had turned conductive across a resistor. Cleaning it fixed the problem.

Moving on to the hacks, he added brightness control by using a potentiometer to control the power to the backlight. Be sure to watch carefully in the video below where he’s attaching a magnet and cord to the potentiometer, and encasing it all in epoxy. At that point, we’re pretty sure we see him spin up a hard drive platter with a sandpaper disk attached to it, forming a bench top disc sander and making us like this hack even more.

He also replaced a small speaker with a larger speaker and amplifier, giving a volume and sound quality difference that’s like night and day. He also added a breakout board with relays for power management, eliminating a seven watt continuous draw when in standby mode.

Be sure to watch the video to the end where he leaves us with a tour of the hacked interior hardware. We like how he’s labeled all his handiwork for any future hacker who might open it up

END_OF_DOCUMENT_TOKEN_TO_BE_REPLACED END_OF_DOCUMENT_TOKEN_TO_BE_REPLACED

For over a hundred years, good typists didn’t ‘hunt and peck’ but instead relied on keeping their fingers on the home row. This technique relies on physical buttons, but with on-screen keyboards used on tablets and other touch screen devices touch typists have a very hard time. [Zach] is working on a new project to bring a chorded keyboard to these devices called ASETNIOP.

Instead of training a typist where to place their finger – the technique used in most other keyboard replacements, ASETNIOP trains the typist which fingers to press. For example, typing ‘H’ requires the typist to press the index and middle fingers of their right hand against the touchscreen. In addition to touchscreens, ASETNIOP can be used with projection systems, Nintendo Power Glove replicas, and extremely large touchpads that include repurposed nooks and Kindles.

If you’d like to try out ASENTNIOP, there’s a tutorial that allows you to try it out on a physical keyboard as well as one for the iPad. It’s a little weird to try out but surely no more difficult to learn than a Dvorak keyboard. [Sprite_tm], a name many of you will recognize from these pages, has wasted no time in replicating the latest cool thing in a much simpler fashion. En Garde is a touch sensor that can detect up to 32 different points of contact on… whatever you use as the surface.  He couldn’t sit idly by and let the Disney funded one from yesterday keep the spot light. As you can see in the video, it works pretty well. If he didn’t tell you that his can only detect up to 32 points as opposed to the 200 of the other, you probably wouldn’t even notice the difference.  Of course, [Sprite_tm] also shares how you could easily beef his up to be even more precise. You can also download his source code an schematics from his site and give it a try yourself.

END_OF_DOCUMENT_TOKEN_TO_BE_REPLACED

This year at the CHI conference in Austin, [Munehiko Sato], [Ivan Poupyrev], and [Chris Harrison] out of the Disney research lab in Pittsburgh demonstrated their way to make touch sensors out of anything. Not only to they suggest using the surface of your skin to control cell phones and MP3 players, they’re also able to recognize touch gestures, like poking or grasping an object. That sounds a little heady, so check out the video of the Touché tech in action.

Like the capacitive touch sensors in our phones and tablets, Touché measures the rise and fall of a capacitor’s charge over time. Unlike  other touch sensors, Touché scans the capacitor at different rates, allowing for a ‘capacitive profile’ that is used to recognized touch gestures.

The applications for this tech are nearly innumerable; the team demonstrated scolding someone for eating cereal with chopsticks (yeah, we know…), an on-body music player interface, and gestures for an office doorknob that notifies passersby if you’ve stepped out for a minute or are gone for the day.

It’s a very interesting build, and we give it two weeks until someone replicates this build. We’ll be sure to post it then.

END_OF_DOCUMENT_TOKEN_TO_BE_REPLACED

[Bastian] sent in a coffee table he built. This isn’t a place to set your drinks and copies of Make, though: it’s a multitouch table with a 3D display. Since no description can do this table justice, take a look at the video.

The build was inspired by the subject of this Hackaday post where [programming4fun] was able to build a ‘holographic display’ using a regular 2D projector and a Kinect. Both builds work on the principle of redrawing the 3D space in relation to the user’s head – as [Bastian] moves his head around the coffee table, the Kinect tracks his location and moves the 3 dimensional grid of boxes in the opposite direction. It’s extremely clever, and looks to be a promising user interface.

In addition to a Kinect, the coffee table uses a Microsoft Surface-like display; four infrared lasers are placed at the corner and detected with a camera next to the projector in the base.

After the break you can see the demo video and a gallery of the images [Bastion] put up on the NUI group forum.