[Grenadier] built his very own x-ray machine. He’s no stranger to high voltage – we’ve seen his Jacob’s Ladders and Marx generators. Surely he can handle himself with high voltage and dangerous equipment. With this portable x-ray machine, [Grenadier] has begun overloading Geiger counters. We’re just happy he knows what he’s doing.

The key component of [Grenadier]’s portable x-ray machine is the Coolidge tube, a simple vacuum tube that produces x-rays with the help of 75 kilovolts of power. The finished build looks awesome. Two meters display the milliamps and kilovolts going to the x-ray tube, and a trio of nixies display the exposure time.

Even though [Grenadier] doesn’t have x-ray film, he can see through things with a scintillation screen that fluoresces when exposed to ionizing radiation. There are two pictures of the x-ray in action – one showing the inside of a pen and the guts of a hard drive (as shown in the title pic).

The output of the x-ray was measured with a Geiger counter. [Grenadier] was able to get a hit every second or so at 50 yards, and very loud white noise at 1 foot. Check out the video of [Grenadier]’s Buildlounge laser cutter contest submission after the break.

END_OF_DOCUMENT_TOKEN_TO_BE_REPLACED 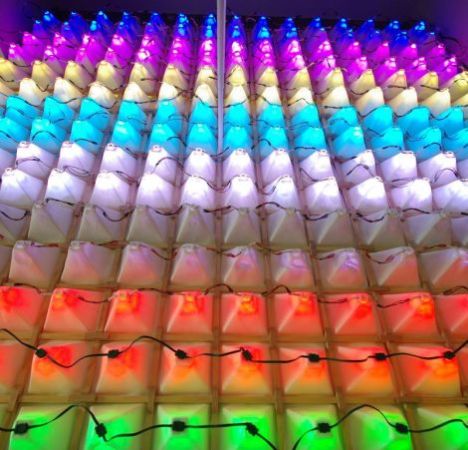 The folks at The Quad Cities Collaboration and Hackerspace (QC Co-Lab) were trying to find something to build for their first big project, and had to look no further than the wall for inspiration. The north end of their facility is home to a huge 15×17 glass block wall that happens to face a well-traveled roadway.

They decided that turning the wall into a huge LED display would be a great way to attract attention from passers-by, so they picked up some GE Color Effects lights and got down to business. Once they found out that the technical college next door was putting on an open house, the race was on to get the light display assembled as quickly as possible to maximize their exposure.

The team mounted the 255 LEDs in vacuum-formed reflective cones, which were attached to wooden frames before being installed behind the glass wall. An Arduino drives the entire display at a smooth 30 frames per second, a task they say tests the very limits of the board’s capabilities.

They finished the job in time for the open house, and as you can see in the video below, the display looks great.

END_OF_DOCUMENT_TOKEN_TO_BE_REPLACED END_OF_DOCUMENT_TOKEN_TO_BE_REPLACED

If you’ve ever thought about extracting caffeine from coffee beans, [Ben] is the guy for you. The last time we ran into him, he had already produced a few aerogel monoliths with a few chemicals, pipe fittings, and some CO2. We’re guessing he needed another use for his supercritical drying chamber, so after looking over a few patents, he decided to make pure caffeine in his garage.

The extraction began with green coffee beans inside the drying chamber. Liquid CO2 is pumped in and heated to the supercritical point. After a few hours, the caffeine will have been extracted from the beans and can be drained from the chamber. Right now, the process results in an inky goo that contains caffeine. [Ben] refined this a little further with Methylene Chloride, a process he’ll document in a future video.

Of course it goes without saying that this build is a little bit on the dangerous side. We’re confident in [Ben]’s abilities to know what he’s doing, but we’re not going to endorse this for every joker on the Internet. Also, two spoonfuls of caffeine will kill you, so try not to screw around with that either.

END_OF_DOCUMENT_TOKEN_TO_BE_REPLACED