[Duality] just finished programming Conway’s Game of Life on a character LCD. The game is a great programming exercise that everyone should undertake at one point or another. It uses a very simple set of rules to evolve the playing area from a given starting state. In this case the game grid is only 64 pixels, one for each of the positions on this 16×2 character LCD screen. This makes for very quick games as the cells tend to quickly reach an equilibrium as they arrive at the outer borders. See for yourself in the clip after the break.

We could have sworn we’ve seen this before, but with four times the playing space thanks to some custom characters. We couldn’t find an example of that, but the idea is to use a larger grid (something more like what’s seen on this graphic LCD) by generating a set of custom characters that slices each 5×8 pixel character into four smaller discrete areas. Something along the lines of what is being done with this spectrum analyzer.

END_OF_DOCUMENT_TOKEN_TO_BE_REPLACED The folks over at the Cincinnati hackerspace Hive13 were wowed last week by an electric motorcycle built by one of their own.

[Rick]’s new ride is built from a 1989 Honda VTR 250. After removing the 24 HP motor, the frame was loaded up with four deep cycle batteries and a DC golf cart motor. Even with the addition of the four heavy batteries, the new electric bike only weighs about 70 pounds more than the stock Honda, allowing all that power to be translated into speed. Right now, [Rick]’s build can reach 54 mph; comparable to an earlier ebike we saw, but [Rick] can also go about 20 miles on a single charge.

After the break you can see a short time lapse of [Rick] tearing down his bike, the first ride though the Cincinnati hackerspace, and a very nice road test showing off the speed of [Rick]’s new ride. There’s also a great Flickr slideshow with some really great pics of the build in progress. Very nice work, [Rick].

END_OF_DOCUMENT_TOKEN_TO_BE_REPLACED 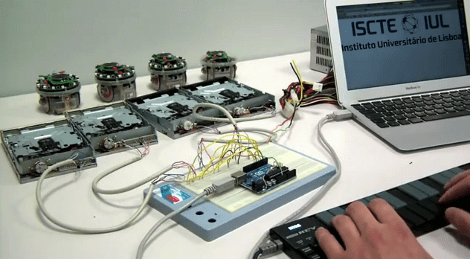 Get ready to join a band. Just follow the guide over at the Moppy project page and you’ll have your very own floppy drive instrument.

The name is a mashup between Musical and Floppy. By using an Arduino UNO as a translator, you can command an array of floppy drives with a musical keyboard (think piano). The head on each floppy drive is controlled by a stepper motor which will put out some sweet sounds if driven at just the right frequency. The lower notes tend to fair a bit better than the high range. One great example of this is the Imperial March theme as heard after the break.

Once you get the base system up and running, it’s time to think of some alternate interfaces. Sure, you can obvious things like toy keyboards. But wouldn’t it be more fun to make it fruit controlled?

END_OF_DOCUMENT_TOKEN_TO_BE_REPLACED If you happen to visit the Spanish port of Gijon, you may notice some giant yellow robotic fish swimming around. These 5 foot long swimmers are part of a proposed sensor network to detect pollutants in the water.  Equipped with an array of sensors, the fish can test for general water quality, or swap out the sensors for specific testing. They communicate with each other to keep from straying too far from the rest of the network and the base charging station.

The fish was designed by the Shoal Consortium, a European commission funded program that draws from intelligent minds in universities all over europe. While the fish cost over $35,000 right now, mass production should reduce that cost considerably.

You can see them swimming around in the BBC video at the link.

[Adam Savage] gives an interesting talk titled “why we make” at the Bay Area MakerFaire. Many have been comparing the leaps we’ve been taking in home engineering/hacking/making etc, to the early days of computers. People are making things at home that are actually making a difference.

[Adam] is a huge collector and maker of movie prop replicas. When he was talking to someone and showing off some of the amazing replicas that determined individuals are constructing in their homes, the person lamented the lack of originality. [Adam] does a good job of representing the other side of that argument. He explains how the drive to replicate these things is sometimes what is pushing the methods and technology further and supporting the community. It is an interesting video to watch, if only for the fun stories you get to hear.

Though he does open the speech by mentioning that he wants to play with an Arduino, you should continue watching. He’s done some amazing work and has some great insight.