Dithering is used to produce an image out of two colors that our eyes can put together into something meaningful. The history of the algorithms goes back to monochrome displays. But now the hobby electronics we work with for fun have comparable computing power and perhaps it’s time to rediscover these techniques. [Windell’s] project implements the Atkinson dithering algorithm in real-time on your webcam. He’s doing this in Processing, which should make it pretty easy to port for your own purposes.

So why might you want to use dithering in your own projects? Because if it can be used to make very cool milled artwork there must be other undiscovered uses lurking around your workshop. 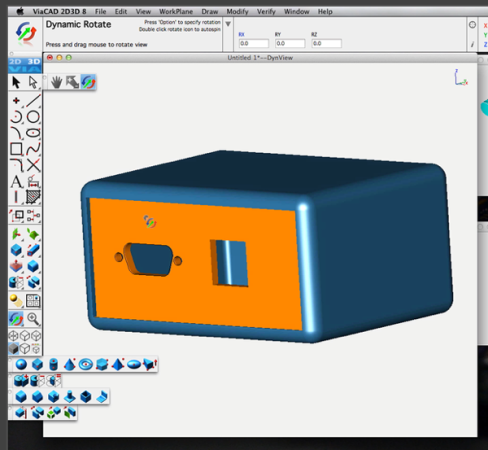 [Landon Cox] recently finished up a 3-part tutorial on designing project enclosures for 3D printing. The series is great if you have not yet tried your hand at this realm of the 3D printing universe, but there’s a lot to take away about design and modeling even if you don’t plan to print your creations.

He starts off part one of the tutorial by explaining the need for 3D printed cases. He believes it’s the natural progression after you’ve made it far enough to have your own PCB manufactured. Why not add a well designed and fabricated case to compliment your meticulously laid out circuitry? In part two he gets the design ball rolling by modeling the top and bottom portions of the case seen above in blue. The final step is to design a face plate that matches the needs of your circuit; in this case it’s DB9 and RJ45 connectors.

It’s not all smooth sailing along the way. [Landon] does actually print the case and the faceplate is just a bit too big for the the rest of the enclosure. But better too big than too small as shaving away a bit of the edges fixes it right up. We’ve known people to put down a small ice rink in their back yard during the winter. But a machine to resurface these diy rinks is unheard of until now. The big name in rink resurfacing is Zamboni, the person who invented this method of keeping the ice pristine.

This has almost everything you would find on a commercial model. The tires are studded with stainless steel screws for traction. The riding lawnmower has had its grass cutting blades replaced with a single steel blade that skims the surface of the ice. There’s even a tank of water which is distributed by a copper pipe with many holes and a squeegee which drags behind the machine. The only thing this is missing is a collection system for the slush which is generated by that skimmer blade. But as you can see in the clip after the break, it does just fine without it.

END_OF_DOCUMENT_TOKEN_TO_BE_REPLACED 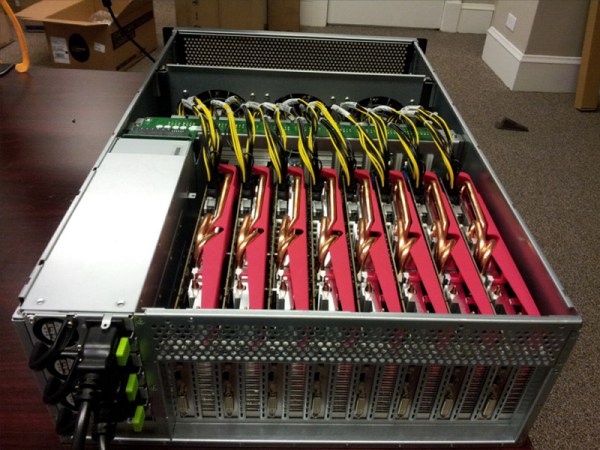 It’s our understanding that the video game industry has long been a driving force in new and better graphics processing hardware. But they’re not the only benefactors to these advances. As we’ve heard before, a graphics processing unit is uniquely qualified to process encryption hashes quickly (we’ve seen this with bitcoin mining). This project strings together 25 GPU cards in 5 servers to form a super fast brute force attack. It’s so fast that the actual specs are beyond our comprehension. How can one understand 348 billion hashes per second?

The testing was used on a collection of password hashes using LM and NTLM protocols. The NTLM is a bit stronger and fared better than the LM, but that’s not actually saying much. An eight character NTLM password will fall in 5.5 hours, while a 14 character LM hash makes it only about six minutes before the solution is discovered. Of course this type of hardware is only good if you have a copy of the password hashes themselves. Login protocols will lock out after a certain number of attempts and have measures in place to slow down automated systems like this one. This video game gives your thumbs a rest while stretching those vocal chords. The pair of microphones seen above control the video game on the LCD display. Saying “Biu” will launch a projectile while “ahh” adjusts the flight path. The system was developed by [Tian Gao] as a final project for his ECE 4760 course at Cornell University.

The inputs are common computer microphones connected to some processing circuitry which he built on a piece of protoboard. This consists of some RC filtering and an LM358 opamp to get the signal ready for use with the ATmega1284. There is only one ADC on that chip so [Tian] alternates sampling from the microphones by using the multiplexer built into the chip. The video signal itself is an NTSC composite signal. To facilitate a reasonable frame rate he uses graphics that are packed in multiples of 8-bits. All in all this allows him to create a 160×200 pixel display.

All of this makes the game sound a little dry, but we dare you to listen to the video clip after the break without cracking a smile.

END_OF_DOCUMENT_TOKEN_TO_BE_REPLACED END_OF_DOCUMENT_TOKEN_TO_BE_REPLACED

The folks over at Adafruit have been busy designing an LED matrix wristwatch for a while now. The circuit works great, but since this watch is powered by a coin cell battery, they’d really like to get the power consumption as low as possible. This means they needed a test rig to measure the consumption of each firmware revision, but how exactly do you build a voltage logger that works with voltages and currents this small? It turned out to be a very interesting project, with plenty of info on how to build an accurate voltage logger for really small projects.