[Roy Bean] thought it was pretty silly for the Milwaukee Makerspace to keep buying bottles of water for their water cooler. He rigged up a system that automatically fills the refrigerated reservoir in their water cooler. It’s a functional hack that also provided an excuse for him to learn about a couple of different sensors.

What you see above is the meat and potatoes of the hack. The well is where water from a bottle drains into the cooler. This has been covered with a sheet of acrylic to keep the drinking water clean. There is a copper pipe which has been plumbed into the tap water supply. The other two bits are redundant level sensors to make sure the water valve shuts off without overflowing. One of them is a capacitive proximity sensor, the other is a conductivity sensor hacked together using stainless steel hardware submerged in the pool.

If you’re worried about the taste or odor of your tap water just add in a single or multiple stage under-counter filter system when plumbing in the water line. The filters are easy to find and we’d bet they cost less than a contract with a bottled water company. 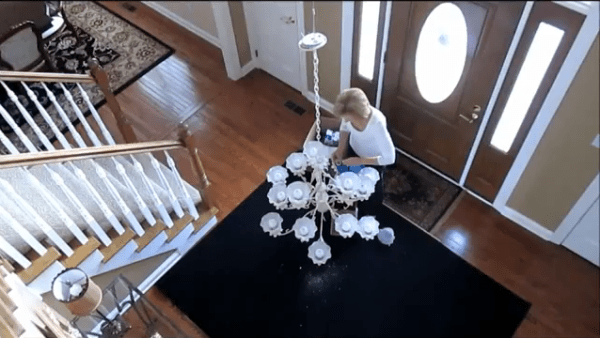 We’ve seen a lot of hacks from [Lou] and his latest continues the tradition of excellence. The entryway of his home is a couple of stories high and features a chandelier. Unfortunately he doesn’t have a ladder tall enough to use when changing light bulbs. Even if he did have a way to get up there it would be nice if the light fixture could come to him instead. This hack makes that happen by adding an electric winch to lower the light fixture.

Watching the installation process makes us think that [Lou] might be a little reckless. He’s up in the attic mounting a winch to the rafters before he cuts the board holding the fifty-pound chandelier’s junction box in place. He mentions foregoing the recommended cable fastener in lieu of some baling wire. But he does manage the task without dropping the ball so to speak — perhaps we shouldn’t be so critical of his methods. After altering the chandelier mounting bracket to work with a winch [Lou] wires an outlet in the attic and adds a plug to the cord on the light. This means he needs to go into the attic to unplug the light before lowering the fixture on the winch. But he’s not done yet. After the break you can watch the second part of the project with improves upon this by adding a wall switch to control the winch and extension cord management to route the power.

[Lou] really loves his automated home gadgets. Check out the gaming table which drops from the ceiling.

END_OF_DOCUMENT_TOKEN_TO_BE_REPLACED 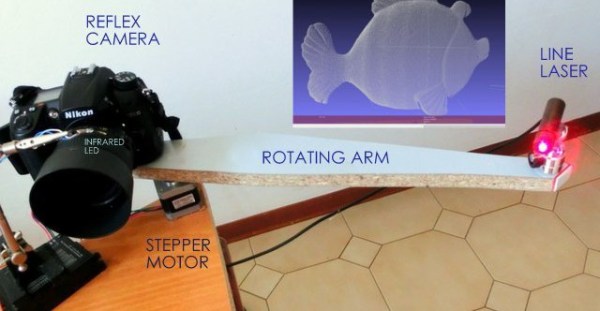 Modeling simple objects in 3D can take some time. Modeling complex items… well you can get your college degree in that sort of thing. This method side-steps the artistic skill necessary to make the real virtual by using a laser and camera to map a three-dimensional object.

[Alessandro Grossi] is breaking the rules by using a 100mW laser for the project. He thinks that the Italian government prohibits anything over 5mW, but also mentions that the lens used to turn the laser dot into a vertical line drops the power dramatically. The beefy diode does still pay off, providing an incredibly intense line of light on the subject being mapped. The high-end DSLR camera mounted on the same arm as the laser captures a detailed image, which can be processed to dump everything other than the laser line itself. Because the two are mounted on different axes, the image provides plenty of perspective.  That translates to the 3D coordinates used in the captured model shown in the inlaid image.

We’ve seen 3D scanners that move the subject; they usually rotate it to map every side. This method only captures one side, but the stepper motor moves in such small increments that the final resolution is astounding. See for yourself in the video after the break.