Rather than use a web app or simple push button to do the trick, they turned the “skip” button into a NERF target. They call their creation the Boom Box Blaster and made a fantastic demo video about it which is found after the break.

Inspired by a painting in the office, the target takes the form of a small hot air balloon. The target obviously needed some kind of sensor that can detect when it is hit by a NERF dart. The group tried several different sensor types, but eventually settled on a medium vibration sensor. This sensor is connected to an Arduino, which then communicates with a Raspberry Pi over a Serial connection. The Pi uses a Python script to monitor the Arduino’s vibration sensor. The system also includes some orange LEDs to simulate flames and a servo attached to the string which suspends the balloon from the ceiling. Whenever a hit is registered, the flames light up and the balloon raises into the air to indicate that the shot was on target.

END_OF_DOCUMENT_TOKEN_TO_BE_REPLACED 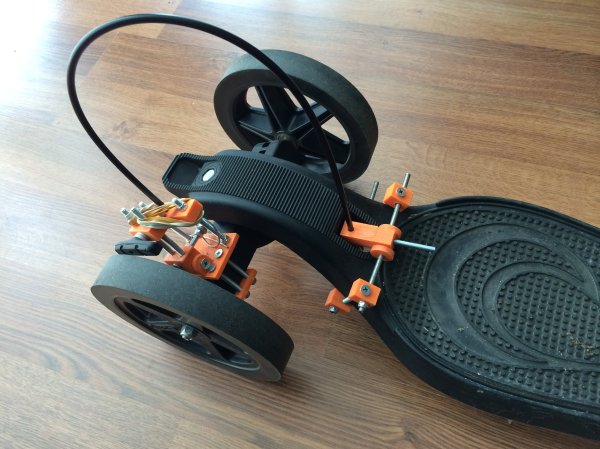 Long boards are awesome. They feel like your surfing on concrete — amazing for hilly areas where you can coast around forever. The weird thing is, none of them come with brakes standard… Even though when you’re going down a hill you can easily hit 30-40mph! [Marius] decided to fix this, so he built his own 3D printed brake system for his Onda long board.

He designed the system in 3Ds Max and 3D printed the parts in PLA using his Printrbot Metal Simple (check out our review here). It uses an off the shelf bicycle brake pad, and brake cable as well as a few elastic bands. Currently only one wheel brakes, but it seems to be enough to slow you down — though he might mirror the system on the other side to obtain more braking power.

The long board he’s using does have slightly larger wheels than normal, but the system could be modified to use on a more standard sized long board.  Stick around after the break to see it in action.