END_OF_DOCUMENT_TOKEN_TO_BE_REPLACED

You know that guy in the next cube is sneaking in when you are away and swiping packs of astronaut ice cream out of your desk. Thanks to [Kevin Thomas], if you have an Arduino and a 3D printer, you can build a rubber band sentry gun to protect your geeky comestibles. You’ll also need some metric hardware, an Arduino Uno, and a handful of servo motors.

The video shows [Kevin] manually aiming the gun, but the software can operate the gun autonomously, if you add some sensors to the hardware.  The build details are a bit sparse, but there is a bill of material and that, combined with the 3D printing files and the videos, should allow you to figure it out.

We couldn’t help but wish for a first person view (FPV) camera and control via a cell phone, so you could snipe at those ice cream thieves while hiding in the broom closet. On the other hand, if you got the gun working, adding the remote wouldn’t be hard at all. You probably have a WiFi FPV camera on your quadcopter that finally came out of that tree and there’s lots of ways to do the controls via Bluetooth or WiFi.

Not that you don’t have options. But here at Hackaday HQ, we have lots of rubber bands and not so many green pigs. If you’d rather shoot paintballs, be careful you don’t accidentally repaint the insides of your cube.

END_OF_DOCUMENT_TOKEN_TO_BE_REPLACED

Rather than use a web app or simple push button to do the trick, they turned the “skip” button into a NERF target. They call their creation the Boom Box Blaster and made a fantastic demo video about it which is found after the break.

Inspired by a painting in the office, the target takes the form of a small hot air balloon. The target obviously needed some kind of sensor that can detect when it is hit by a NERF dart. The group tried several different sensor types, but eventually settled on a medium vibration sensor. This sensor is connected to an Arduino, which then communicates with a Raspberry Pi over a Serial connection. The Pi uses a Python script to monitor the Arduino’s vibration sensor. The system also includes some orange LEDs to simulate flames and a servo attached to the string which suspends the balloon from the ceiling. Whenever a hit is registered, the flames light up and the balloon raises into the air to indicate that the shot was on target.

END_OF_DOCUMENT_TOKEN_TO_BE_REPLACED 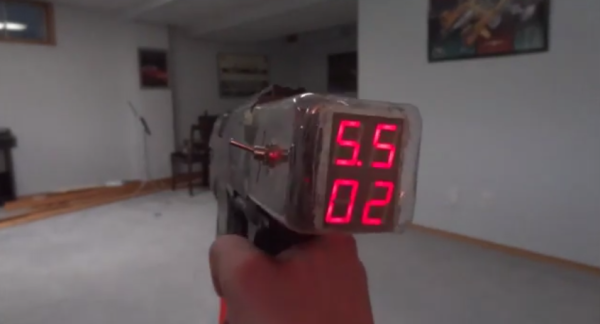 [Paul] and his buddy [Jonathan] recently had a zombie themed Larp event to go to, so in the spirit of making the experience more realistic, they decided to upgrade their Nerf N-Strike Stryfe gun.

They started by cracking open the gun and making note of the available space for a few bells and whistles. Luckily, thanks to traditional plastic injection molding practices — there’s lots of room!

Upgrades include a magazine sensor, a jam sensor, a trigger sensor and a voltmeter to make the gun a little bit smarter. A knockoff Arduino Pro Mini takes in all these inputs and outputs it to a 7-segment LED display for easy visibility. Our favorite part is the ammo sensor, which keeps a tally of how many shots you’ve used. It’s simply an IR photo-diode and IR transistor in a Darlington configuration, connected to the GPIO interrupt pin on the fake Arduino.

END_OF_DOCUMENT_TOKEN_TO_BE_REPLACED

Office warfare has just been stepped up a notch and it’s time to hide in your cubicles! Enter the Rubber Band Blaster-32, a fully automatic rubber band handgun with switchable barrels for quick reloading.

It features a unique trigger release design that we haven’t seen before. By using a pull string release, [Dave] the inventor was able to load multiple rubber bands per barrel for individual firing, one by one. Hold down the trigger and as the firing wheel spins up, you can start shooting up to 10 rounds a second!

According to [Dave], reload time is around a minute per barrel, but the barrels can be stored loaded and ready to go, so pack a few mags and hang out behind the water cooler. That’s the last time [Bill] from accounting steals my stapler!

To see this puppy in action, sit tight after the break!