An Architectural Study of the Sega Genesis and Super Nintendo

The traditional comparison between two consoles is usually presented as a series of specs, a bunch of numbers, and tick marks indicating which system wins in each category. While this does illustrate the strengths and weaknesses of each console, it is a rhetorical technique that is grossly imprecise, given the different architectures. The usual benchmark comparison is as follows:

Conventional wisdom – and people arguing on the Internet – tells you that faster is better, and with the Sega console having a higher clock speed it’s capable of doing more calculations per second. Sure, it may not be able to draw as many sprites on the screen as the SNES, but the faster processor is what allowed the Genesis / Mega Drive to have ‘faster’ games – the Sonic series, for example, and the incredible library of sports games. It’s an argument wrapped up in specs so neatly this conventional wisdom has been largely unquestioned for nearly thirty years. Even the Internet’s best console experts fall victim to the trap of comparing specs between different architectures, and it’s complete and utter baloney.

Let’s take a look at one of these numbers – the CPU speed of the SNES and the Genesis/Mega Drive. The SNES CPU, a Ricoh 5A22 is based on the 65C816 core, an oft-forgotten 16-bit offshoot of the 6502 and related chips found in everything from the Apple II, Commodore 64, and even the original Nintendo NES. The 5A22 inside the SNES is clocked at around 2.68 MHz for most games. The Sega used a 68000 CPU clocked at 7.67 MHz. By comparing just these two numbers, the SNES wins, but this isn’t necessarily the truth.

In comparing the clock speed of two different CPUs, we’re merely looking at how frequently the bus is accessed, and not the number of instructions per second.

Even though the Sega console has a faster clock, it performs fewer instructions per second.

And so we come to the crux of the argument; the statistics of the great console wars, while not wrong, are frequently misinterpreted. How then do we decide an outcome?

The Architecture of the Sega Genesis / Mega Drive 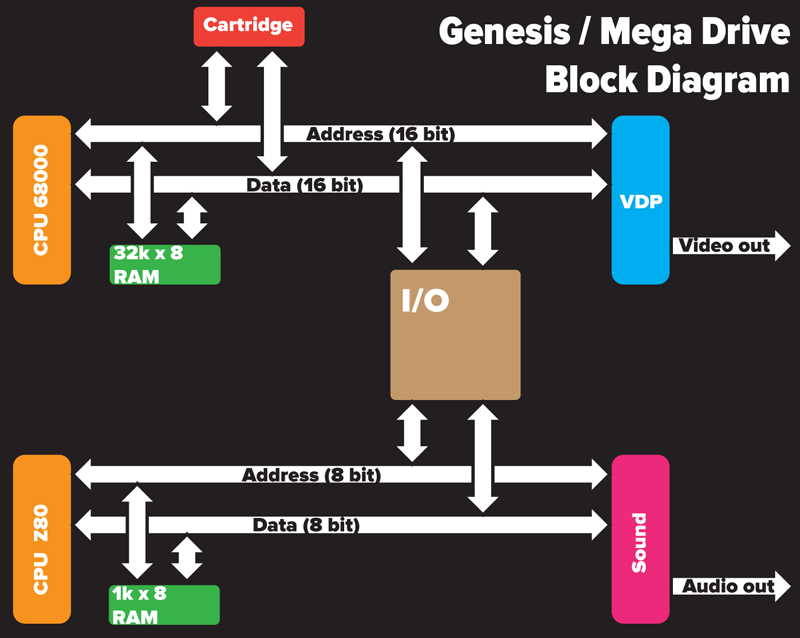 While the Sega Genesis/Mega Drive is usually cited as having a 68000 CPU, this isn’t a complete picture of what’s going on inside the Sega console. In effect, the Genesis is a dual-processor computer with two CPUs dedicated to different tasks. The 68000 handles game logic and graphics, but surprisingly not much else. A Z80 — a CPU introduced a decade before the Genesis/Mega Drive — is used for reading the state of the game pads, and playing audio.

Interestingly, the Sega Genesis / Mega Drive contains most of the components of Sega’s earlier console, the Sega Master System. With the addition of a Power Base Converter, Master System games can be played while the 68000 CPU is in idle.

The  Architecture of the Super Nintendo 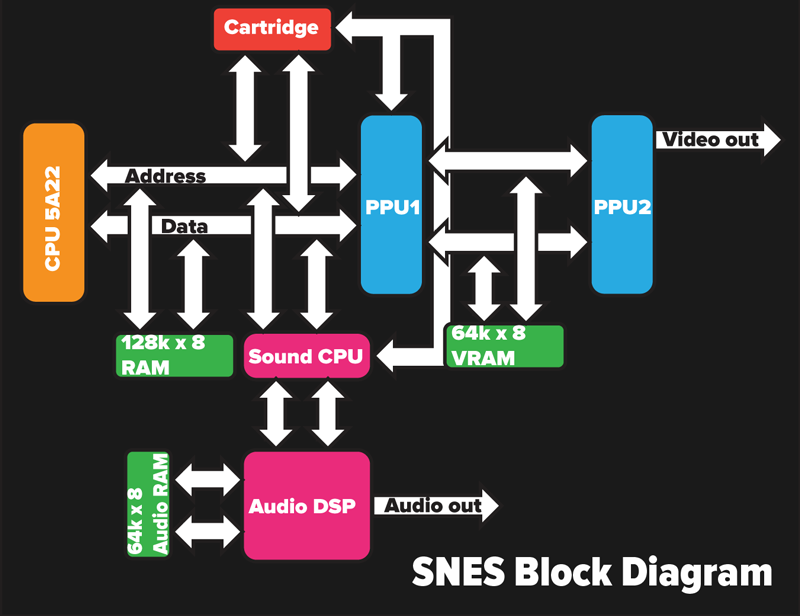 The SNES is a different beast entirely. Everything is controlled through the 5A22 / 65816 CPU. The controllers are fed right into the data lines of the 5A22, and DMA instructions are able to shuttle data between the two slightly different Picture Processing Units.

An interesting difference between the two consoles are the connections between the cartridge slot and various peripheral chips. Nearly the entire cartridge connector of the Sega machine is dedicated to the address and data lines for the 68000 CPU. While there are a few control signals thrown in, it’s not enough to allow the cartridge direct access to the video display unit or the FM synthesis chip.

The cartridge connector for the SNES, on the other hand, has direct access to one picture processing unit and the audio processor. The exploitation of this capability was seen in games ranging from Star Fox with it’s SuperFX chip, to Mega Man X games with its math coprocessor, to Super Mario RPG: Legend of the Seven Stars and its Super Accelerator 1 chip that is basically an upgraded version of the main SNES CPU, the 5A22.

Comparative designs, and who won the console wars

Time to make a holistic analysis of each competing platform. By far, the SNES is a more capable console; its cartridges are able to send data directly to the PPUs and audio processors, it’s faster, and there’s more work RAM, vRAM, and audio RAM.

The Genesis / Mega Drive may be seen as more expandable thanks to the Sega CD (the first CD-ROM based game console, the Sega 32X), an upgraded coprocessor for the Genesis, backwards compatibility with a Master System Power Base converter, and a number of strange cartridges like Sonic and Knuckles with ‘lock-on’ technology. However, it’s actually the SNES that is more expandable. This is most certainly not the conventional wisdom, and the difference is due to how expandability was implemented in each console.

To add additional capabilities to the SNES, game designers would add new chips to the game cartridge. Star Fox famously exploited this with the SuperFX chip, and the list of SNES enhancement chips is deserving of its own entry in Wikipedia.

In comparison, the Genesis / Mega Drive could only be expanded through kludges – either through abusing the ASIC chip between the 68000 and Z80 CPUs, or in the case of the 32X add-on, bypassing the video display unit entirely.

In any event, this is purely an academic exercise. Games sell consoles, and Nintendo’s IP portfolio – even in the early 90s – included characters that had their own cartoons, live action movies, and cereals.

While this academic exercise is completely unimportant today – there probably won’t be a game console that ships with cartridges any more – it is an interesting case study on extendable computer design.