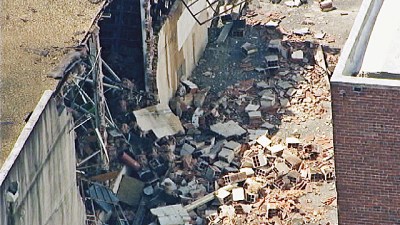 On the morning of September 26th, 2013 the city of Orlando was rocked by an explosion. Buildings shook, windows rattled, and Amtrak service on a nearby track was halted. TV stations broke in with special reports. The dispatched helicopters didn’t find fire and brimstone, but they did find a building with one wall blown out. The building was located at 47 West Jefferson Street. For most this was just another news day, but a few die-hard fans recognized the building as Creative Engineering, home to a different kind of explosion: The Rock-afire Explosion.

The Inventor and His Band of Robots 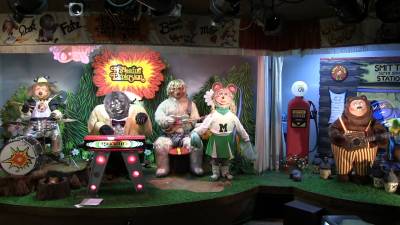 Many of us have heard of the Rock-afire Explosion, the animatronic band which graced the stage of ShowBiz pizza from 1980 through 1990. For those not in the know, the band was created by the inventor of Whac-A-Mole, [Aaron Fechter], engineer, entrepreneur and owner of Creative Engineering. When ShowBiz pizza sold to Chuck E. Cheese, the Rock-afire Explosion characters were replaced with Chuck E. and friends. Creative Engineering lost its biggest customer. Once over 300 employees, the company was again reduced to just [Aaron]. He owned the building which housed the company, a 38,000 square foot shop and warehouse. Rather than sell the shop and remaining hardware, [Aaron] kept working there alone. Most of the building remained as it had in the 1980’s. Tools placed down by artisans on their last day of work remained, slowly gathering dust.

[Aaron] kept on inventing, and had a few almost-hits, such as the Antigravity Freedom Machine (AGFM). The AGFM was a 6502-based dedicated email client that was supplanted by the World Wide Web in the mid 1990’s. Around 2004 or so, Generation X’s nostalgia for the Rock-afire Explosion kicked in. YouTube videos of rescued robots operating in basements, sheds, and one-off restaurants popped up. Fan clubs organized on the internet. All of this culminated in a 2008 documentary about the band.

In some ways, it almost seems like The Rock-afire Explosion is cursed. Just about everyone featured in the movie has endured some sort of disaster. [Chris Thrash’s] Rock-afire themed arcade went belly up. [Snap’s] Blast to the Past Museum and his Rock-Afire show were destroyed by fire in 2010. For [Aaron], disaster came in the form of a new invention: Hydrillium.

[Aaron] first learned of a new hydrogen-based fuel from [William Richardson], who had failed to market the gas himself. [Aaron] took [Richardson] on as a paid mentor and began to develop a way to produce the gas in enough volume to run tests.

[Aaron] handled the marketing as well. He dubbed the fuel “Carbo-Hydrillium”, later shortened to “Hydrillum”, calling it the “fuel of the future”. Hydrillium could do everything from cutting steel to cooking the perfect juicy steak. People were interested in the fuel, and a few restaurants agreed to test it out. [Aaron] now had to produce enough fuel to transport and deliver to the restaurants for daily operations.

The problem is that hydrogen has a low energy density by volume. How does one get around that? Increase the pressure. Aaron used a scuba tank compressor to accomplish this. Scuba tanks have working pressures in the thousands of PSI. 3000 and 4500 PSI are typical scuba tank pressures.

Hydrillium is similar to water gas, which is a synthesis gas produced by passing steam over hot coals. Rather than load up the coal stove, [Aaron] broke out his welder and performed electrolysis of water. When experimental fuels and water are mentioned, people usually think of Brown’s gas, or HHO. This was something different. To create Hydrillium, an electric arc is struck underwater across a pair of carbon electrodes. The electricity breaks the water down into hydrogen and oxygen. The electrodes are consumed by the arc, putting carbon molecules into the mixture. The oxygen molecules bond with the carbon, forming carbon monoxide and carbon dioxide. The resulting gas mixture contains 60-70 % hydrogen gas, 25-30 % carbon monoxide, and 1-2% carbon dioxide. Small amounts of other gasses such as methane, nitrogen, and oxygen would also be present. Not all the water would be consumed by the reaction. Some vapor would be caught and collected.

[Fechter] collected the gas with an expansion bladder – similar to capturing Brown’s gas with a plastic bag above the electrodes. When full, the bladder was pumped down into a low pressure tank. The low pressure tank was then fed through a scuba compressor into a high pressure steel tank. These “K Type” tanks are the familiar 56″ tall tanks often used for welding gases, oxygen, or anything else that needs to be stored and transported compressed.

So we’ve got hydrogen, carbon monoxide, and a few other gasses. Beyond the explosion hazard, it sounds innocuous enough. Unfortunately that was far from the truth. Hydrillium stored in a steel cylinder was a ticking time bomb waiting to go off.

The problem was a one-two punch of chemical attacks: carbon monoxide Stress Corrosion Cracking (SCC) and hydrogen embrittlement. The prime attack in this case was SCC.
SCC in storage cylinders first became an issue in the 1950’s when storage and transportation tank pressures were increased from 1000 psig to 2000 psig. Tanks began bursting, leading to several investigations. The ensuing research showed that four specific elements needed to be present for SCC to occur.

Just as with normal rust, water reacts with carbon dioxide to form carbonic acid, which dissolves iron. In this case though, widespread rust is inhibited by the carbon monoxide. The acid attacks local areas, leading to cracks through the metal crystals. Called transgranular cracks, these continue to grow until the steel fails.

Hydrogen and steel are also a bad combination. Hydrogen is a slippery little atom. Individual hydrogen atoms can diffuse into the granular structure of steel. The hydrogen atoms then recombine into hydrogen molecules. This increases pressure from within the steel itself. This trapped hydrogen causes huge stresses, eventually cracking the metal from the inside out. The higher the pressure and temperature, the faster the process of cracking. 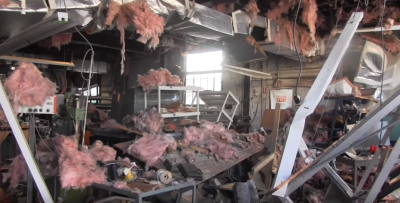 On September 26th, 2013, the steel of one of Aaron’s tanks finally failed. The crack in it grew, unzipping and opening two flaps in the tank, much like a flasher opening a trench coat. The 200 cubic feet of Hydrillium in the tank spread throughout the room creating a pressure wave of over 2 PSI against the exterior wall. This was enough to blow the brick wall out into the adjacent parking lot. The roof in the blast area was lifted from its supports. The floor was pushed a full foot below its original position. The newly created hole was also a saving grace. The released hydrogen quick dispersed up into the atmosphere, avoiding a secondary explosion and fire. The fire crew still had their hands full though, as there were 10 more cylinders of Hydrillium in the building. Eventually it was decided to vent each one to the atmosphere. The process took about seven hours. 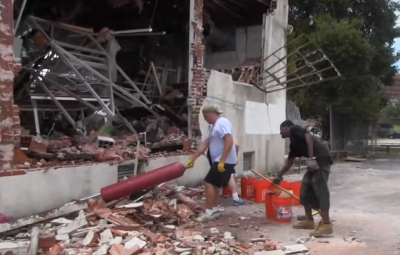 In the wake of the explosion, [Aaron] repaired the building, and kept on hacking. The inventor has returned to his arcade roots. He recently unveiled a new game called Bashy Bug. The Rock-afire Explosion is still working as well. They were last seen reporting on a train wreck in Orlando.

What lessons can we learn from all of this? We all enjoy our projects, but know when you’re venturing into a dangerous zone – things like large batteries, compressed gas, high voltage, and chemical reactions just to name a few. When you head in that direction, learn all you can about how to work safely. Don’t be afraid to ask an expert. It might save your workshop – or your life.

97 thoughts on “Experimental Gases, Danger, And The Rock-afire Explosion”