Hackaday’s own mythical beast, Sophi Kravitz makes some amazing collaborative tech-art pieces. In this talk, she walks us through four of the art projects that she’s been working on lately, and gives us a glimpse behind the scenes into the technical side of what it takes to see an installation from idea, to prototype, and onto completion.

Watch Sophi’s talk from the Hackaday | Belgrade conference and then join us after the jump for a few more details. 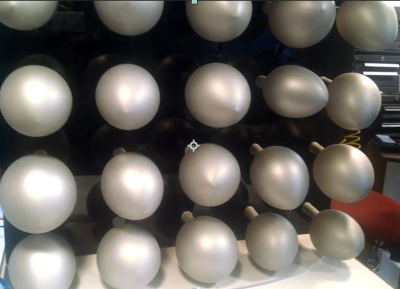 Due to the scale of these projects, there is no artist sitting alone in a room working in solitude. Sophi usually works collaboratively with teams which often involves a mechanical person and a coder joining with her electronic design skills to produce a finished piece. Getting the vision realized is all about teamwork and problem-solving, and it’s usually novel because art means doing something new.

In the process, she runs into really neat technical problems. Creating a piece with 25 balloons that inflate and deflate to act together as pixels and respond to the audience sounds like a lot of fun. But then you have to make the inflation and deflation rates match, which in turn means calibrating the relative diameters and flow rates of the input and output solenoids, and then figuring out how to cram that all into a small space. 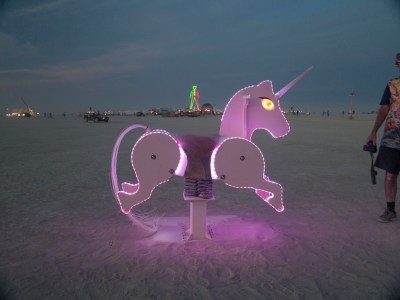 As part of a Loquacious and Lovely — a rideable unicorn installation for Burning Man — she got to work with half a ton of waterjetted and welded steel and CNC’ed plywood. Sophie also inherited a tremendous quantity of LEDs, so the unicorns in question light up when ridden. There’s no technical mysteries here, it’s just your usual unicorn art, but written large.

One of the pieces that she’s currently helping out with involves polarizing film, specifically 288 pieces of polarizing film mounted on 288 servo motors. Sophi’s part of the project is making sure that the motors actually work and designing the power supply system. You’ve noticed how your little robot motors pull down the power rail under heavy load? Well, she’s got 288 of them!

The final artwork that Sophie is working on involves large single-pixel LCDs. Because she’s not using the off-the-shelf stuff, this means learning a lot about how LCDs work. Well, that and because the folks supplying the panels weren’t super helpful. This means characterizing the LCD samples she had, so she got to play around with them for a while. She heated one up in the oven to see how it responds to temperature, and yeah, they get runny.

We’re used to LCD screens being on or off. But if you’ve messed around with the “contrast” settings on a screen, you know it’s not that simple. After a bunch of experimentation, Sophie worked out an analog driver circuit that lets her fade an LCD in and out. Right now, she’s still experimenting with what’s possible — the final art application is still in the works. The technical challenge of many calibrated op-amp driver circuits is daunting, but imagine what you could do with a grid of many dimmable, transparent LCD pixels. Who knows where this will lead?

We love tech art. Not the least because it makes you think outside of the usual boxes and figure out solutions to unusual problems, but also because in the end, it’s got to work and look good. The extra constraint makes the problem that much more fun to solve. So thanks Sophie for walking us through the stuff you’ve been up to and letting us peek over your shoulder!

6 thoughts on “Sophi Kravitz Talks The Tech Behind Art”