Satellites make many of our everyday activities possible, and the technology continues to improve by leaps and bounds. A prototype, recently completed by [Arda Tüysüz]’s team at ETH Zürich’s Power Electronics Systems Lab in collaboration with its Celeroton spinoff, aims to improve satellite attitude positioning with a high speed, magnetically levitated motor.

Beginning as a doctoral thesis work led by [Tüysüz], the motor builds on existing technologies, but has been arranged into a new application — with great effect. Currently, the maneuvering motors on board satellites are operated at a low rpm to reduce wear, must be sealed in a low-nitrogen environment to prevent rusting of the components, and the microvibrations induced by the ball-bearings in the motors reduces the positioning accuracy. With one felling swoop, this new prototype motor overcomes all of those problems. 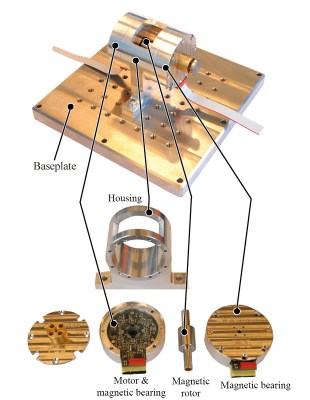 The primary draw is its frictionless motor — made possible by a magnetic field that keeps the rotor afloat. This allows the motor to operate at a staggering 150,000 RPM — twenty times faster than those in current use —  and in a vacuum, since there is no wearing of the parts to account for. This also eliminates those pesky microvibrations — improving satellite attitude accuracy. All these benefits are enclosed in a small package that has potential applications in satellites as small as shoeboxes. Is the motor scale-able for use in commercial and research satellites? Considering the interest shown by the European Space Agency in this project, we think so.

Now, this isn’t a traditional ‘hack’, but ingenuity that can improve quality of life is in keeping with the hacker spirit, while also offering the potential for advanced capacity for CubeSats and similar space-faring operations.