Suppose you take a few measurements of a time-varying signal. Let’s say for concreteness that you have a microcontroller that reads some voltage 100 times per second. Collecting a bunch of data points together, you plot them out — this must surely have come from a sine wave at 35 Hz, you say. Just connect up the dots with a sine wave! It’s as plain as the nose on your face.

And then some spoil-sport comes along and draws in a version of your sine wave at -65 Hz, and then another at 135 Hz. And then more at -165 Hz and 235 Hz or -265 Hz and 335 Hz. And then an arbitrary number of potential sine waves that fit the very same data, all spaced apart at positive and negative integer multiples of your 100 Hz sampling frequency. Soon, your very pretty picture is looking a bit more complicated than you’d bargained for, and you have no idea which of these frequencies generated your data. It seems hopeless! You go home in tears.

But then you realize that this phenomenon gives you super powers — the power to resolve frequencies that are significantly higher than your sampling frequency. Just as the 235 Hz wave leaves an apparent 35 Hz waveform in the data when sampled at 100 Hz, a 237 Hz signal will look like 37 Hz. You can tell them apart even though they’re well beyond your ability to sample that fast. You’re pulling in information from beyond the Nyquist limit!

This essential ambiguity in sampling — that all frequencies offset by an integer multiple of the sampling frequency produce the same data — is called “aliasing”. And understanding aliasing is the first step toward really understanding sampling, and that’s the first step into the big wide world of digital signal processing.

Whether aliasing corrupts your pristine data or provides you with super powers hinges on your understanding of the effect, and maybe some judicious pre-sampling filtering, so let’s get some knowledge.

In some sense, aliasing is all in your mind. When you took your 100 Hz samples, you were probably looking for some relatively low frequency. Otherwise you would have sampled faster, right? But how is Mother Nature supposed to know which frequencies you want to measure? She just hands you the instantaneous sum of all voltage signals at all frequencies from DC to daylight, and leaves you to sort it out.

If you add together 35 Hz and 135 Hz waveforms, the resulting analog waveform will have twice the amplitude at the sampling points that correspond to 100 Hz. And when you sample, you get exactly the right value. Why did you expect otherwise?

The why is because when you think of the sampled values, you’re fooling yourself into thinking that you’ve seen the whole picture rather than just a few tiny points in time, with no data in between. But in principle, anything can be happening to the signal between samples. We just choose to use the simplest (lowest frequency) interpretation that will fit.

Not only does this seem reasonable, but this is also deeply ingrained in human physiology, so there’s no use fighting it. When you watch a Western, and the stagecoach accelerates so that the spokes in its wheels just match the film’s frame rate, you see the wheels as stopped because each frame was taken when the next spoke was in the same position as in the previous frame. As it speeds up further, you even think you see the wheel turning backwards. The illusion that sampled data comes from the “obvious” underlying signal is strong.

So if sampling adds together signals from different frequencies, how can we disentangle them? The short answer is that once the data has been collected, you can’t. There’s just not enough information there to recreate the full bandwidth of the universe.

But we can avoid aliasing when it’s a problem. The brute force method is to simply take more frequent samples. Since the alias frequencies are the desired frequency plus or minus integer multiples of the sampling frequency,

, sampling faster pushes away the frequencies that would otherwise mess up your data. If you could see between the data points in the various graphs, you could tell that not all of the signal was actually coming from 35 Hz.

Indeed, if you knew beforehand that your 35 Hz signal was contaminated with a 135 Hz signal, you could sample at 120 Hz, resulting in first-order aliases at -115 Hz and 15 Hz. Now you could separate the signals from each other using fancy DSP tricks. Of course, if the signal also has nuisance signals at 155 Hz, this won’t work.

An alternative is to get rid of the would-be aliases before sampling in the first place. When you wake up in the morning, and look outside to see the sun rise, you don’t ask yourself if you’ve slept for one night or two. That’s because it’s impossible that you’ve slept for 32 hours without noticing, right? Similarly, to anti-alias your data before sampling, you just need to rule out the higher multiples of the sampling frequency with a filter.

Lowpass sampling is the name for this procedure of applying a lowpass filter to your data before sampling it. Filtering out the high frequency content before sampling means that there’s nothing there to alias down, and the lowest frequencies, which you’re going to perceive as being “the sample” anyway, are the only ones present. This is done in nearly every analog-to-digital converter one way or another.

Because the negative frequencies interfere with our desired signal, the cutoff frequency of the filter needs to be set at 1/2 of the sampling frequency, or at the top of the desired bandwidth, whichever’s lower. When recording CDs, for instance, they are passed through a steep 20-22 Khz cutoff filter before being sampled at 44.1 kHz. A potentially contaminating 30.1 kHz signal, which would alias down to -14 kHz after sampling, is simply filtered away before it ever hits the ADC.

When you sample using an ADC, consider what’s going on at multiples of the sampling frequency. Do you need a lowpass filter? We suspect you might.

Finally, here is the super-power side of aliasing. Just as you can count the number of spokes on the “stopped” wagon wheel in Stagecoach, you can also get information about frequencies that are higher than the sampling rate by taking advantage of aliasing. And just as with the spokes on the wheel, even though it looks like you’re drawing samples from a single period of the waveform, you’re actually getting snapshots of different phase positions from across many periods of the wave. But if the desired signal is relatively consistent — the wagon’s spokes are roughly interchangeable — it won’t matter.

Bandpass Sampling (or undersampling) is the DSP name for this super power. You know that signals at all multiples of the sampling frequency are all going to get mixed together when you sample. The trick is just the same as in the lowpass case: simply filter out all the frequency bands except for the one that you want, and let aliasing do the frequency downconversion for you. 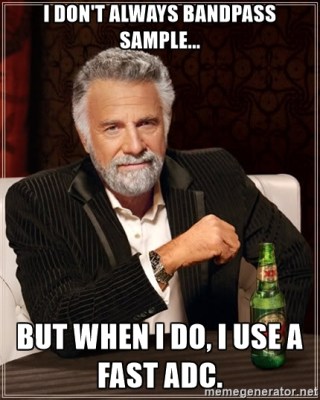 So if we were interested in capturing the 135 Hz wave, we would simply filter as tightly around the desired 135 Hz as we can, sample at 100 Hz, and read the resulting frequency off at 35 Hz. Note that the ADC you use still has to be able to resolve the 135 Hz signal — if its input is too sluggish, it will smear out the high-frequency content, leaving you with a mess. (The exposure on the movie camera has to be fast enough to “freeze” the wagon wheel as well. Garbage in, garbage out.) Still, you can get the same information about the 135 Hz signal using only 100 samples per second instead of 270 by using this trick if your ADC is up to it.

There’s actually a lot more to aliasing than we have room to cover here, mostly because it informs all aspects of sampling, and thus DSP. If you want to get in deeper, any good DSP textbook should do. I really liked [Richard Lyons]’s “Understanding Digital Signal Processing”. (Here is the chapter on bandpass sampling for your enjoyment.)

If you’re a little bit uneasy with all of the “negative frequency” stuff above, it actually makes a lot more sense when viewed in the complex plane and with I/Q sampling. For a gentle video introduction to both complex signals and sampling theory, I like [Michael Ossmann]’s video series on software defined radio basics. Watch at least Chapter Six on complex numbers and then Chapter Nine on aliasing. If you don’t have any interest in SDR applications and you’re already comfortable with complex signals, you can actually get by starting Chapter Nine at 14:00 and going through 24:00. It’ll be the best ten minutes that you’ve spent. (Other than the ten reading this article, naturally.)

If you’re wondering just how those signals get sampled in the first place, try [Bil Herd]’s roundup of ADC techniques.

28 thoughts on “Say It With Me: Aliasing”