What Exactly is the Problem?

Across different studies, tDCS treatments reported a variable response both between and within experimental groups. Before it can be considered a potentially useful treatment (or enhancement), that variation needs to be either understood or reduced. The authors of the review pointed out a distinct lack of work in this area. There is also variability between different tests on the same test subject. Some studies that measured the effect on different days have reported unreliable effects, with some days presenting a cognitive enhancement, and other days an inhibition. It’s far from clear what we can expect a medium or long-tern tDCS treatment to achieve. 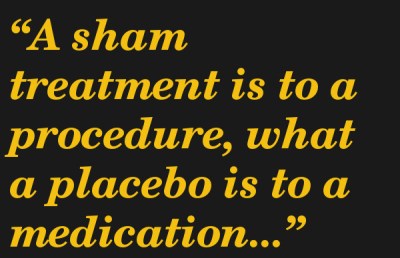 There are also problems with the sham treatments. A sham treatment is to a procedure, what a placebo is to a medication. In a sham treatment, an experimenter goes through the motions of performing a treatment, without actually applying it. This is so the subjects (and ideally the experimenter as well) are unaware about whether the treatment was actually applied. This is called blinding and is an important element of clinical trials. In a strong study, the only difference between treatment and control groups should be the actual treatment. But out of 80 tDCS studies, the reviewers found that less than 15% had set up proper control groups.

The motor/cognitive interference issues faced by tDCS are certainly an odd ones. Some studies have associated mental and physical activity during or after tDCS treatment with the nullification of any benefit. If true, this is difficult to control for because it’s difficult to precisely control what a subject is thinking. This may seem like a minor point, but currently tDCS is sometimes prescribed for stroke rehabilitation. Stroke rehabilitation commonly involves physical exercises. So beyond developing better experimental studies, understanding this potentially confounding factor could lead to improvements in stroke rehabilitation.

And finally, it turns out that sponge electrodes are often used in tDCS studies. Hair not being a great conductor of electricity, some studies used ample quantities of saline solution to make the required connection. It turns out that makes it hard to control exactly where the current is flowing.

Overall it looks like there were some issues to solve before taking tDCS cognitive enhancement seriously. The lack of good control groups alone is an important concern.

So I was quite surprised to read a study published this October (PDF) in a high impact-factor journal, detailing an experiment that dealt with some of these critiques. It also featured statistically significant results, with relevant effect sizes. Is it enough to begin biohacking though?

In their study, they subjected two male rhesus macaques of different ages to tDCS targeting two different brain regions. Macaques are the most frequently used animal in cognition studies to better understand the human brain. The macaques were given a visual foraging task and their performance measured with infra-red eye tracking.

That doesn’t provide data to deal with differences between subjects, although they did perform an MRI scan of each subject and use that data to build a mathematical model to try to ensure that the same areas of the brain are being stimulated between subjects. Measuring between-subject variance is just not part of the scope of this study though, and that’s fine.

Variability of treatment effects on a single subject is a strong point of this study. The subjects performed 1-3 blocks of 75-100 trials per day for multiple days. I couldn’t identify exactly how many days in the paper, but from Figure 3A it looks like it was quite some time. The results appear to be consistent over time.

They also used sham-stimulation (‘placebo’) techniques to set up proper control groups. Additionally, they measured whether the sham stimulation technique had any effect on local field potentials in the target brain areas, and the differences between the sham and actual treatment were quite clear.

Motor and cognitive interference wasn’t really accounted for beyond requiring that the animals remain seated before and during the experiment. That’s understandable, I imagine it’s difficult to instruct a macaque what to think, so this also seems simply beyond the scope of this study.

Finally, they didn’t use sponge electrodes, instead opting for pads with conductive gel applied, and adhered in place. They measured a variable impedance, but tolerated that rather than douse everything in saline solution.

Overall this study seems to have addressed some of the shortcomings present in tDCS research. But what did they find? Something quite interesting, but misreported in recent news. They found that the macaques subjected to tDCS learned the foraging task significantly more efficiently.

The measure they used is called an N50, a measure of data contiguity. This is used in psychology as a measure of associative learning, but a 40% lower N50 score is not the same as saying a 40% faster learning rate (as was commonly reported in recent tech news). If the measure being used was the mean (average) then the reporting would be more correct.

They’ve also presented their tDCS results as consistent with a specific proposed mechanism of action: modulating the timing of neurons spiking. Moreover, they measured local field potentials (LFP) and associated changes in power and coherence of some frequency bands with the accelerated learning observed. LFP is similar to the electroencephalograms (EEG) we’re more familiar with here, with the main difference being that they are measured using thin electrodes embedded in brain tissue rather than on the surface of the scalp. It’s by no means a complete and testable model of how tDCS may enhance learning, but it looks a lot like progress.

Of course, the above is no reason to put faith in present commercial device manufacturers. The legal standing of such products in the United States is also rather interesting (disclaimer: I’m interested in most things) and has itself been covered by journals.

Nonetheless, I have to admit that I was too quick to dismiss the potential of tDCS. It has been approved for the treatment of some medical conditions, and it was wrong of me to assume that further applications are impossible. I still won’t be building one as there are just too many valid criticisms out there, but it looks like the research could at least conceivably bear fruit. I very much doubt it will be anything so convenient as doubling my learning speed for the price of a few milliamperes, but I’m excited to see where the research goes nonetheless.

The citation for the journal article referenced here (in case useful) is:

You may now begin making references to a certain movie franchise, you maniacs.

53 thoughts on “Shockingly, DARPA’s Brain Stimulator Might Not Be Complete Nonsense”