With news of a coming shortage, you would expect resellers to bump up prices, buy more stock, or do something to ensure a steady supply of SMD resistors for the coming years. There are two ways to figure out if this is happening. The first is advanced analytics from a company that takes a look at tens of thousands of BOMs and gives engineers the tools to determine the right component for their supply chain. The second method is to look at some old Mouser invoices.

I’ve purchased a few reels of Yageo resistors in the past, and looking through my Mouser order history, I haven’t seen any change in the price between six months ago and today. A reel of five thousand 220 Ω, 0603 resistors from Yageo cost $10 last June, and it costs $10 today. Of course, this is a dataset of one, and to truly understand the stock situation we need better data.

FindChips Pro, a search tool for electronic components (owned by SupplyFrame, who are owners of Hackaday and the people who pay me), has a “Part Intelligence” tool for looking at historical price and stock situations for various components. For example, the stock of Yageo’s RC0603JR-071ML, a 1 MΩ, 0603 thick film resistor, has gone down across all distributors for the past six months. In August of 2017, about ten million of these resistors were for sale across all distributors. Today, a shade over six million are available. The price, however, has not increased. When the price demand curve will catch up with inventory is an open question. [data source — requires login to view historical data]

Learning a Lesson of Beef Consumption

News of a potential shortage of such a vital commodity like chip resistors and capacitors may come as a shock to some, and of course precedes the obvious question: should companies stock up on these jellybean parts? Should you lock in your prices now, and buy an entire year’s worth of inventory? What would happen if everyone did that? History shows us you shouldn’t.

There were plenty of shortages of consumer goods in the United States during the early 1970s, most notably a gas shortage. But there was another that provided a great insight into why you shouldn’t stockpile goods beyond what you need during a shortage. In 1971, a corn blight struck crops in the American southeast, raising the price of livestock feed. In response, livestock producers reduced their herds, and the price of meat — especially beef — increased dramatically. By 1973, a beef shortage was reported in the media, and consumers complained about the high cost of a good steak.

Also in 1973, William Rathje, a young archaeologist at the University of Arizona, started studying garbage. Tucked away inside bags of household refuse collected in ’73 was garbage that would surprise anyone paying attention to the beef shortage. Beneath grapefruit rinds and coffee grounds, he found surprisingly well-preserved t-bone steaks, wrapped in paper towels. Other bags of trash excavated during the first season of Rathje’s Garbage Project revealed even more cuts of beef, ostensibly perfectly edible when they were discarded. In these bags, you could also find newspapers reporting on a beef shortage, and the results of media surveys clearly demonstrating that consumers were reducing their beef consumption. In fact, analysis of garbage showed consumers were buying three times as much beef during the beef shortage than before or after. Consumers were stockpiling and panic buying, without realizing beef is perishable. Others were buying cheaper, unfamiliar cuts of beef they didn’t know how to prepare. During a beef shortage, beef consumption increased. Human psychology is odd. 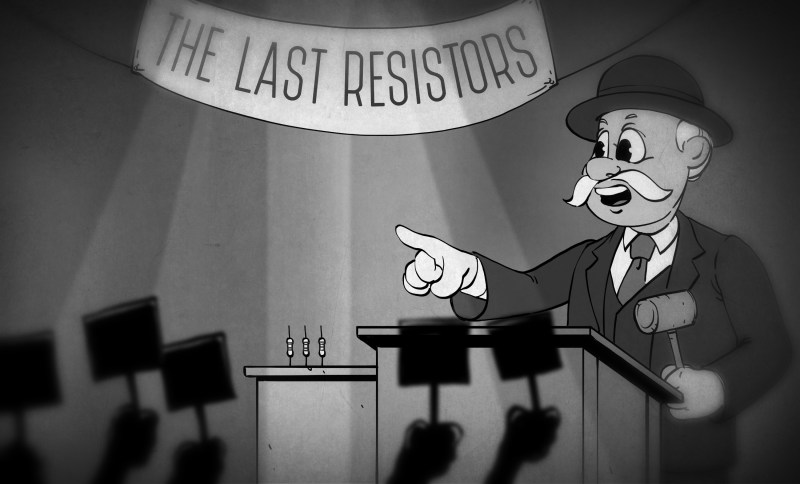 The moral of the beef shortage story is to buy what you forseeably need, and not what you fear you’ll be unable to get. To do the latter in our current scenario will result in reels of components going unused on racks and in closets around the world instead of being available when needed. Resistors don’t spoil as fast as t-bone steak, but nobody likes carrying excess inventory, and hoarding behavior definitely misallocates a scarce resource.

Unnecessary stockpiling can be bad, but the electronics industry is also very weird. There is no other industry on Earth where one random dude can buy the world’s supply of something. I, myself, have done this accidentally. Then again, the market for commodity resistors is different from that for rare components where being able to source a part makes or breaks a product release. This is likely to be a temporary blip. There is enough inventory out there, and market forces will prevail eventually demanding resistor manufacturers spin up their lines and produce a few thousand more reels of resistors. But until then, we may very well see higher prices for chip resistors, potentially bumping up BOM costs a few cents.