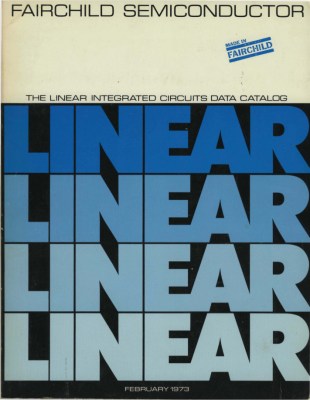 The op-amp chapter reads almost as a potted history of the development of these components as integrated circuits from Bob Widlar’s original μA702 (Page20, labeled as a “DC amplifier” here) through its improved siblings to the familiar frequency-compensated μA741 that we’ve already mentioned, and thence into the realm of FET input devices. Op-amps are a field that is still developing, but in these pages and over just that decade’s development we see their genesis.

Power supply regulators in 1973 are exclusively linear, in sharp contrast to the array of switching regulators that would grace a similar chapter today. This section shows a field in its relative infancy, in which a 3-terminal μA7800 series regulator was still a big deal, and in which the μA723’s switching application circuit is an oddity rather than its primary application. One surprise comes from the negative versions of the three-terminal regulators, what we would know as a 7900-series chip is instead a 78N00-series (page 238). Did 7900-series chips debut from a rival manufacturer? Perhaps readers would like to speculate in the comments.

The computer interface chapter is a selection of line drivers, RS232 interfaces, display drivers, and A to D converters. Some of these functions are still available in today’s catalogues, but it’s fair to say that computer interfacing has moved on since the 1970s. An archaic set of items though are the core memory drivers and sense amplifiers starting with the 75325 on page 318. Core memory was out-of-date by 1973 and is now something of a curio, so these data sheets make particularly interesting reading for the student of computing hardware history.

The last-but-one chapter shows us 1973 at its finest, or perhaps some of the 1973 those of us who were alive at the time might remember. The functions in Fairchild’s consumer product line are entirely analogue, and reflect the state-of-the-art in what the well-to-do family might have wished for in their living room or car.

A CRT color TV and a stereo FM radio were both big-ticket items in the early 1970s, and though home computers had arrived by the end of the decade they would remain supreme in the world of home entertainment for many years to come. Thus we have entire chipsets for the small-signal and color decoder sections of NTSC (shown here from page 458) and PAL TVs, triple video op-amps for color CRT drivers, stereo multiplex decoders both analog and PLL, and entire AM radios on a chip, but not a digital IC to be seen. Uniquely among all the chapters in the book this one has no survivors into the present day, even those chips that might still find a use have been superceded many times over.

Finally, we’re on familiar ground with a chapter of transistor arrays, diode arrays, and a single analog switch. The 3046 transistor array (page 499) should be a familiar part as it is still available, and it serves to highlight something else about the Fairchild range. In most of the chapters are these parts with just a number and no letters, these are Fairchild’s take on a competitor’s device. Thus for example the 3046 is RCA’s CA3046, and in the op-amp chapter the 301 is National Semiconductor’s LM301. Given that the 301 was the work of [Bob Widlar] when he left Fairchild for National, there must have been some internal politics over the cloning of that particular part.

In 1973 many pieces of electronics were entirely made from discrete components and it was still possible to buy consumer electronic devices containing germanium transistors or even tubes, so this catalog gives us the state of the art in linear circuitry rather than a universal picture. It makes an interesting read for its insights into archaic technologies as well as for its look at some of the semiconductor industry’s component survivors, and it would still find a place on the shelves of a Hackaday writer, were she to find a physical copy. We have come a long way since 1973, but there is still value sometimes in looking back.

23 thoughts on “Retrotechtacular: AM Radios, Core Memory, And Color TV, What Was Hot In Chips In ’73”