Hackberry Feedback System – assembly of the Hackberry Hand and improvisation of the feedback system : The prosthetic forearm with socket needs attachments to make it useful. The Hackberry Feedback System project built a pair of articulated hands with sensors for feedback. This team assembled two Exiii Hackberry right and left hand kits, which by itself is a pretty complicated process. An embedded Arduino drives several servos for the thumb and fingers. To extend functionality, team mentor [Jean Noel] helped add a temperature sensor which is embedded in the palm and hooked up to the Arduino, that drives a bunch of WS2812 smart RGB LEDs mounted as a bracelet on the wrist of the arm. In “Temperature” measurement mode, it indicates blue for cold and red for hot objects. In the “Fun” party mode, is does random animations. On the second assembly, they embedded a pair of force-sensing resistors connected to the Arduino on that hand. The Arduino drives a servo motor whose horn was used to provide tactile feedback. 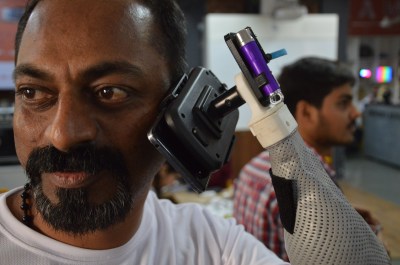 SHIVA HANDS – Creating Funny/Tools Hands : Often, a specific accessory provides better functionality for the user compared to an articulated hand. The SHIVA hands team designed and built several add-on attachments that could fit on the DIY Prosthetic Arm. [Mahen] suggested a Mobile phone holder with a built-in laser pointer and a mosquito swatter holder (useful in tropical Mumbai), while [Nico] wanted a plectrum holder since he loves playing the guitar. They also planned to build a Nerf Gun holder attachment sometime in the future.

Three teams worked on braille devices based on the Braille rap – using a 3D printer as a braille embosser. 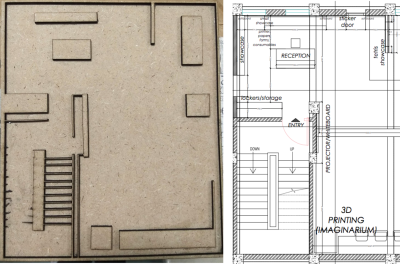 BrailleRap STEAM – A vision to create a Braille map for Visually Impaired people : For a visually impaired person who visits a public space such as a library, a restaurant or a train station, navigation is a big constraint. The goal of this team, mentored by [Hugues Aubin], was to investigate various ways in which public “braille” maps can be created and how additional information can be displayed at vital way points within the space, whose location is identified on the braille map. The team tried various fabrication methods using the tools and facilities available at the makerspace. Another idea they tried, after interacting with the visually impaired team members, was to use material of different textures to identify specific areas on a map. Abrasive textures (emery/sandpaper) in various grits were found to be quite useful, and they plan to investigate further the use of textures to embed information within the maps. Team member [Arthur] took a Makerbot Replicator 3D printer and modified its firmware to convert it into a Braille embossing machine. The only mechanical modification needed is a simple metal pin embedded in a 3D printed adapter that is snap fitted over the hot end. Using this, they were successful in using the 3D printer to emboss braille on thick paper and plastic film.

BrailleRap STEAM CNC – Modifications to the CNC for replicating BrailleRap : This team took possession of the ShapeOko CNC mill lying at the Maker’s Asylum and proceeded to add the electronics and code to it for use as a braille embosser. This is a fairly inexpensive and quick way to build a braille embosser using materials commonly available at a makerspace. Besides the mechanics of the CNC mill, all that’s needed is an Arduino, a motor driver shield and a power supply. [Arthur] wrote some great code which takes text input and converts it to Braille and then generates the required G-code that can be sent to the CNC for embossing. The CNC team was successful in embossing braille on paper, plastic as well as on thin metal obtained from discarded soda cans.

OpenBraille Steam – building a low cost braille printer : The OpenBraille team worked on building a braille printer from scratch using a kit of parts which the MyHumanKit team had got with them. The open source kit consisted of commonly available parts used for building 3D printers and a few custom, 3D printed pieces. The original project is still work in progress and a bit rough around the edges. Besides, the build team did not have much prior experience, so building this machine was a bit of a struggle for them but a great learning experience. Towards the end, they did manage to make a few sample prints, and we hope to see further progress on this over time.

Roll with It: Wheelchairs Where They Weren’t Before

The last two projects looked at how wheelchair bound people could be helped using assistive tech.

O-trotti – universal, cost-effective attachment to convert normal wheelchair to electric : In large parts of the world, the differently-abled do not have state support for subsidised assistive tech such as wheelchairs. Most people who need them can barely afford the low-cost, manual versions. Electric wheelchairs, consequently, are out of reach for most people. An easy workaround would be to build an add-on device that can convert a regular wheelchair to an electric one. Unfortunately, even these conversion kits are quite expensive.

The O-trotti team’s brief was to come up with a modular design for an electric wheel which could be snapped on to normal wheelchairs. The team, mentored by [Yohann Modulaire], worked on two projects simultaneously. One was to take a commercially available electric trike and use its components — inspired by the e-Trotti design. The other team worked on building a device from scratch. In both cases, the hardware required is pretty basic. A geared DC motor, sealed lead acid battery, and a controller for speed and direction control. Both versions were built within the five days, but this is a project that still needs work to get to a finished product.

Fl’Air – build a wheelchair that can be used for paragliding : This was, by far, the most ambitious project and the one that needed the most safety considerations. Paragliding is not something that the differently abled “need”, but it is certainly something that must be made more accessible for them to be able to enjoy the thrill of flying. Wheelchair paragliding is a tandem activity, so the pilot needs to be extremely skilled and licensed. [John Lejeune], the team mentor, is an expert paraglider himself, so he knew exactly what was required, especially in terms of safety. Also part of this team was [Avi Malik], an ex-Indian Air Force pilot and international paragliding expert who doesn’t let his artificial foot get in the way of his passion for flying. The team working on this had a couple of automotive and bike building enthusiasts and by the end of day 5, they had successfully managed to design the wheelchair, get all the required pipes cut and bent, and received a whole lot of minor parts cut in sheet metal from a local water-jet cutting facility. This build is still work in progress, but we look forward to seeing how it progresses and eventually see a test flight involving [John], [Avi] and the other experts at TemplePilots in Kamshet, near Mumbai.

It is not easy to concisely report on a five-day program involving almost 100 hackers working on multiple projects so we had to skip a lot of details. This was an amazing experience and that story is shared through each of the project pages. Take some time to further explore the projects that interest you, and please leave your feedback and encouragement for the teams on their project pages on Hackaday.io. 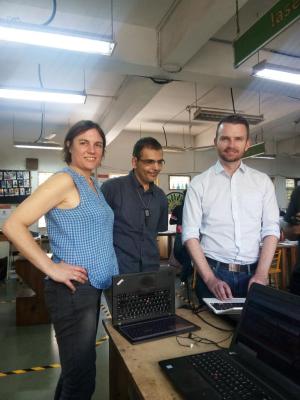 The S.T.E.A.M Fabrikarium was unlike most other “hackathons”. To start with, the 65 participants and 20 mentors included 15 differently abled people who not only provided their feedback, but were also an integral part of the various teams and took part in the design and building of the assistive devices. The MyHumanKit group had built five open source projects during an earlier Fabrikarium in France. The goal for this event was to build on these existing projects and replicate as well as improve them.

The event was hosted at Maker’s Asylum in Mumbai. [Bodo Hoenen] from New York, [Delphine] from the MyHumanKit group in Rennes, France and [Anool Mahidharia] from Mumbai were present on hand to help out with the documentation. Hackaday was proud to team up to provide documentation support via Hackaday.io to ensure that the teams could record their Open Source work and share it with the rest of the community.