Blockchain Education Network Vietnam recently held an event titled “Building a Robotics & Artificial Intelligence Ecosystem with Blockchain”. The title alone has three of my favorite things in it, so when a client of mine asked me if I could put together a little hardware demonstration for the event, I jumped at the opportunity.

I also thought I’d take a moment to write about it, because I haven’t seen much coverage of emerging technology events in the developing world, and the fact is that there’s a consistently high level of interest. I’ve yet to go to an event that wasn’t filled to capacity, and I hope to share some of that enthusiasm with you.

As it turns out, the event took place sequentially in two locations: once in Australia, and again in Vietnam. I attended the Vietnam event, and it seemed to focus more on robotics and blockchain than AI. The talks were high level but introductory, with the focus on what problems companies are trying to tackle with blockchain rather than the technical aspects of programming with blockchain. If the event had one fault, it was that it didn’t have enough about the underlying technology, but that’s to be expected as blockchain is a very new concept here in Vietnam.

On the other hand, the community was actually there for blockchain itself – not a single person asked me about cryptocurrencies which was refreshing. I don’t have anything against cryptocurrencies, but I am tired of taking over every conversation about blockchain. This crowd is excited to learn more about the new technology and how to apply the concepts beyond the currency applications we’ve already seen.

The first speaker, Thuc Vu from Ohmnilabs, had a fun telepresence robot called Ohmni. The movement seemed pretty natural piloting it around the stage with a tablet, and it looked like it could be a lot of fun with Google Cardboard or another VR headset.

What was more interesting to me was how they manufactured the robots. They use fairly ordinary filament 3D printers in parallel to print out most of the casing and small plastic parts. Most of their printers take about half a day to print out a set of parts, although they have some with large print beds that can operate faster. While he’s based in the USA, he’s actively trying to bring his automated manufacturing technology to Vietnam.

You can see their manufacturing process in more detail in this short video (the good stuff starts about 45 seconds in). This was actually the first time I’ve encountered a 3D printed consumer product in the wild. I’ve been largely unimpressed with the parts I’ve seen come out of filament printers, but this was well made, so I guess I’ve been doing it wrong!

Besides cool robots, Thuc is launching a platform called Kambria to encourage more cooperation in the robotics industry. His argument is that the field of robotics is largely the domain of very large companies that have little motivation to risk sharing technology. He’s hoping to allow smaller organizations and individuals to participate in robot development by providing a bounty system, attribution in the blockchain, and incentives for long-term cooperation in the form of a token system. 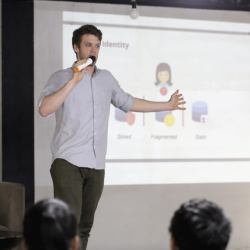 The next speaker was Duncan Brown from Distributed Identity. Duncan proposes using blockchain to store detailed personally identifiable data from multiple sources as a type of distributed identity system. To be honest, I’m not a big fan of anyone collecting, storing, and selling information about me. On the other hand, since that’s going to happen anyway, I’d rather at least be able to know what’s being collected in the hope of being able to choose the services I use more carefully and be able to quickly deal with fraud.

Recent coverage on exactly what user data Facebook collects, and the consequences of that data being used in electoral processes, presents a fair argument to be more open about data collection. Or perhaps reconsider an older decentralized and encryption-friendly messaging service: email.

What Happens to Mining Hardware When it Gets ‘Laid Off’?

Last and also least, the final speaker was me. This would normally be fine, except for one minor oversight: no one had informed me I would be speaking at the event! It was a friendly crowd though and everyone was eager to learn and ask questions, so not a big deal.

I have been working on ways to convert secondhand cryptocurrency mining hardware into AI training hardware to use at local universities, so I talked about that for a few minutes. The effort is in its early stages, but it focuses on reducing downtime by applying proper ventilation, increasing PCI Express bandwidth, and adding some hardware-level remote management and sensing to consumer motherboards. No more open air frames and PCIe risers, that’s for sure!

It’s not rocket surgery, in fact the main challenge is economic. Local cryptocurrency mining farms have more in common with a chicken coop than a datacenter. The parts are far from ideal as they’ve been running very hot and are caked with thick layers of greasy dust, yet obtaining a reasonable price is difficult. In other words, it’s a waiting game.

Overall it was a fun event, and while I realize that blockchain is very new here, I hope that future events will expand to cover actual blockchain programming because the community seems quite strong in Vietnam.

7 thoughts on “A Blockchain, Robotics And AI Event In Vietnam”