The proof is in the pudding, and here it is. My ornithopter flew like a bird and my longest flight was 21 seconds. As you can see, when the rubber band has a lot of potential energy in it, the ornithopter has enough power to gain altitude. As it runs down, it slowly comes back to earth.

Check out the video, and then let’s continue with material choices for building one,the physics of an ornithopter, and the gotchas I met along the way.

That the ornithopter should be as strong as possible yet lightweight wasn’t a surprise. But I still had to find materials which met those criteria and I wanted readily available ones so that many others could reproduce what I did.

I started with popsicle sticks since they’re easy to find. Those turned out to be too short and too heavy. I figured that balsa wood might be too weak, and looking at ornithopter videos online I saw some using bamboo. Where do you find bamboo? Dollar stores sometimes have it for holding plants upright. If you’re careful, you can cut it into thin strips lengthwise using a knife.

But my ornithopter made with bamboo didn’t fly, and though I hadn’t eliminated the bamboo as the reason, I moved on to balsa wood anyway. I had originally avoided balsa wood thinking it might not be strong enough for the wing spars. It turned out that lengths of 3/32″x3/32″ balsa with an 8″ length weighed 0.5 grams whereas an equally strong and rigid length of bamboo was 0.7 grams. So I went with balsa wood.

Gluing thread to the fuselage

I wanted an ornithopter which wouldn’t break easily from handling while remaining lightweight. Also, some areas of the ornithopter would be under considerable stress during flight. So it all had to be connected together well without adding too much weight. Looking at what others had done, I found that after gluing pieces together with cyanoacrylate (super glue), wrapping those pieces in cotton thread and wetting that with more glue made for a very strong yet lightweight join. 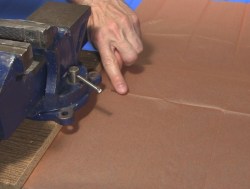 There are many lightweight but sufficiently strong materials for covering the wings and tail. I tried plastic grocery bag material and tissue from a flower shop used for wrapping flowers. But if you want to go even lighter, there’s what’s often referred to as Japanese Tissue.

A search for “jap lite flite tissue” will turn up all kinds and after placing an order I put it to the test. Flower store tissue for my ornithopter’s 16.5 cm wingspan weighed in at 1 gram whereas the Jap-Lite brand tissue was 0.25 grams. That may not seem like much, but the entire ornithopter with the rubber band is just 9 grams.

Mine came folded so to remove the folds, I stretched it between two heavy objects, vices in my case, and lightly dabbed water on the folds.

Common rubber bands, the kind you find in office and school supply stores do work, but flights will be short, usually only a few seconds. Using two such rubber bands at the same time at least gives a higher energy density for the same number of turns.

However, there’s actually a specific rubber used for this type of flying, one which stores a large amount of energy without breaking. It’s called TAN Super Sport Rubber and comes as long strips, in a selection of widths. I purchased 32 feet of 1/8″ wide rubber, though it’s also available by the pound.

What worked for my ornithopter was to make a band by cutting out a 30″ long strip and tying the ends together. Then I formed that into three shorter loops which then goes on the ornithopter.

I found that I could wind it around 250 times before I worried about breaking either the rubber or the ornithopter. Winding that many by hand seemed a bit time-consuming so I purchased a 1:5 gear ratio rubber band winder.

The Engineering in Ornithopter Wings

It’s pretty impressive for my flapping machine to gain altitude at the beginning of its flight. How is this accomplished? For an airplane, the wings provide the lift and the propeller pulls it forward. But with an ornithopter, the wings do both.

For rubber band ornithopter wings, something called the angle of attack plays a big part in creating lift. That’s the angle which a wing makes relative to its direction through the oncoming air.

With an ornithopter, the angle needs to be just a few degrees. But it’s hard to even conceptualize the angle of attack when you envision the wing spars in motion. The path to understanding begins by thinking about the wing during a few points along its travel.

During a downstroke, near the fuselage, the wing isn’t moving very far and as long as the ornithopter’s nose is tilted up a bit then the wing there will have the needed angle of attack.

On the upstroke, most of the wing ideally changes shape such that the angle of attack is zero, meaning the wing is moving straight into the direction of the airflow and thus producing no effect. However, the area of the wing near the fuselage is not moving much, and the ornithopter’s tilt means that it can still create lift.

And how is forward movement, or thrust, created? The lift along most of the wing is angled forward a little, producing the forward thrust.

Getting The Right Tilt

The center of gravity should be just a little behind the center of lift, aka the center of pressure. This is to keep the ornithopter’s nose tilted up slightly. Most of the lift comes from the area of the wing closest to the fuselage, and as we’ve seen, this provides lift only if it has the needed angle of attack. Keeping the nose up does this.

Making the ornithopter lighter and lighter got me to horizontal flight. The final step which resulted in it also rising vertically was realizing that I had a hidden lever. I’ve already described the lever detail in my article all about levers, but here’s how I found and fixed it.

With my earliest versions, the wings would lower with no problem, but when raising them, it seemed as if something was sticking somewhere.

Turning the ornithopter upside down eliminated a lot of construction defects as possible reasons. That’s because the difficulty reversed. With the bottom of the ornithopter now facing upward, it was still having difficulty lifting the wings. The problem sounded like something related to gravity and that’s when I noticed that each wing was part of a lever. 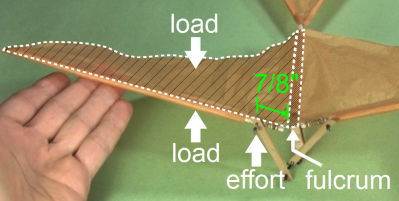 The wing mechanism works by having the rubber band turn a crank. That crank lifts and lowers two connecting rods which then lift and lower the wings. The wings both pivot at the top of the fuselage. Where is there a lever? The point at which a wing pivots forms the lever’s fulcrum. The load is the air pressure on the wing surface. And the force, or effort, is applied by a connecting rod where it connects to the wing.

The longer the distance between the fulcrum and where the connecting rod connects to the wing, the less work the rubber band will have to do to lift the wing. In my first version, the one made of popsicle sticks, this distance was 9/16″. Lifting became a little easier when I made it 5/8″. And the ornithopter began rising vertically when I increased the distance to 7/8″. The rubber band was able to lift the wing fast enough to get the needed number of flaps per minute to make the ornithopter rise vertically, as well as horizontally.

In the end, my ornithopter flew like a bird and my longest flight was 21 seconds.

The next step is to make an RC controlled one. I’d love to hear from anyone who has worked with their own ornithopter projects or even worked with fixed-wing craft where you’ve designed your own wings. There are doubtlessly interesting differences between fixed wings and flapping ones. Share your stories in the comments below.

35 thoughts on “Scratch-Built Ornithopter: Here’s How I Flapped My Way To Flight”