While we here at Hackaday never question why an individual took on a particular project, it surely doesn’t stop our beloved readers from grabbing their pitchforks and demanding such answers in the comments. Perhaps no posts generate more of this sort of furore than the ones which feature old audio gear infused with modern hardware. In almost every case the answer is the same: the person liked the look and feel of vintage hardware, but didn’t want to be limited to antiquated media. 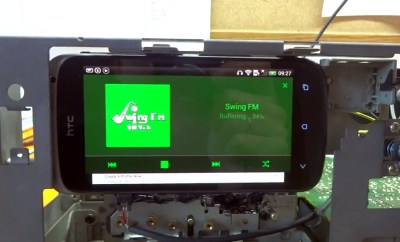 That sentiment is perhaps perfectly personified by the TapeLess Deck Project, created by [Artur Młynarz]. His creations combine vintage cassette decks with an Android phone small enough to fit behind the tape door. An Android application which mimics the look of a playing tape, complete with “hand written” track info, completes the illusion.

The output from the phone is tied into the deck where the audio signal from the tape head would have been, so the volume controls and VU meters still work as expected. Watching the meters bounce around while the animated “tape” plays on the screen really does look incredibly slick, though the effect is somewhat hindered by the fact the physical playback controls don’t seem to be implemented. Incidentally, the whole experience works better if the plastic window on the tape door is removed; that way you can utilize the touch and swipe interface [Artur] has in the software.

We’ve seen previous attempts to modernize the audio cassette experience, but they’ve tended to be more of a novelty than anything. But these decks are nice enough that you can like them non-ironically. Though if we’re talking about portable tape players, there’s only room for one in our cold mechanical hearts.

[Thanks to Nikolai for the tip]

43 thoughts on “Ditch The Tapes, Put An Android In Your Deck”