This hack began by buying a simple HP inkjet printer from China for $28 USD. There’s some interesting hardware in this cheap printer — an ARM processor that might run Linux, there’s a big ‘ol serial Flash chip with all the code completely unencrypted, and there’s a serial port that spits out debugging info. On the printer carriage itself, there’s an encoder, but the real story here is in the ink cartridge itself. There’s a reason inkjet cartridges cost more than the printer itself. Inside each inkjet cartridge, there’s a reservoir of ink, and a series of tiny holes. Right beside those holes, there’s a small heating element. When current is applied to that heating element, the ink literally boils (yep, that’s where the trademark ‘Bubblejet’ came from) and squirts out the nozzle onto a piece of paper.

The first HP ink cartridge had twelve of these nozzles, which is easy enough to control directly from a computer or microcontroller. To print faster, though, you’re going to need more nozzles, and that means more heating elements. To do this, HP engineers simply lay out the nozzles in a grid, and control each nozzle with a MOSFET and a matrix that will heat up these nozzles individually. The HP cartridge in Sprite’s printer is much more complex, and after removing the metal mask on the printer cartridge and carefully inspecting the silicon underneath, he was presented with hundreds of nozzles, all controlled through just a handful of pins. That’s alright, because oscilloscopes exist, and this is something that can be eventually reverse engineered. 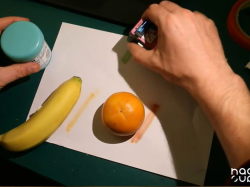 Of course, being able to print nyan cats on everything from skin to lattes is cool, but with the simple addition of a color sensor, Sprite’s magic marker can become a marker that will write in any color. Yes, if you hold this magic marker up to a banana, it will write in yellow. Hold it up to an apple, and it’ll do green or red. If this sounds familiar, you’re right: this is the idea behind the perpetual Kickstarter scam, the Scribble pen, but this one works.

If you haven’t watched the video, please do. Sprite’s presentations are as humorous and enjoyable as they are informative and technical. And thanks again to Sprite for the great talk!