Dexter isn’t the only robotic arm in town, by any means. But in terms of hobbyist-level robotics, it’s by far the most complete robot arm that we’ve seen, and it includes a couple of design features that make both its positional accuracy and overall usability stand out above the rest. This is a robot arm with many of the bells and whistles of a hundred-thousand dollar robot, but on a couple-thousand dollar budget. END_OF_DOCUMENT_TOKEN_TO_BE_REPLACED 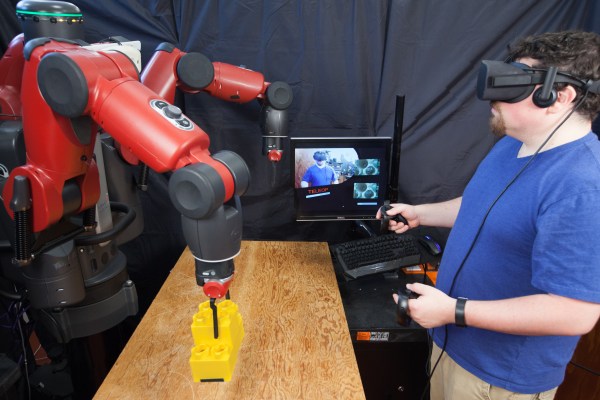 MIT’s Computer Science and Artificial Intelligence Lab, CSAIL, has created a process of teleoperating a Baxter humanoid robot with an Oculus Rift VR headset. This project is partially aimed towards making manufacturing jobs telecommutable. It could even be a way to supervise robot workers from a distance.

In a nutshell, the user controls the robot remotely in a virtual reality environment. The user does this specifically in a VR environment modeled like a control room with multiple sensor displays, making it feel like they are sitting inside the robot’s head. By using hand controllers, users can match their movements to the robot’s to complete various tasks. If you’ve seen Pacific Rim, you are probably envisioning a Jaegar right about now — minus the psychic linking.

END_OF_DOCUMENT_TOKEN_TO_BE_REPLACED 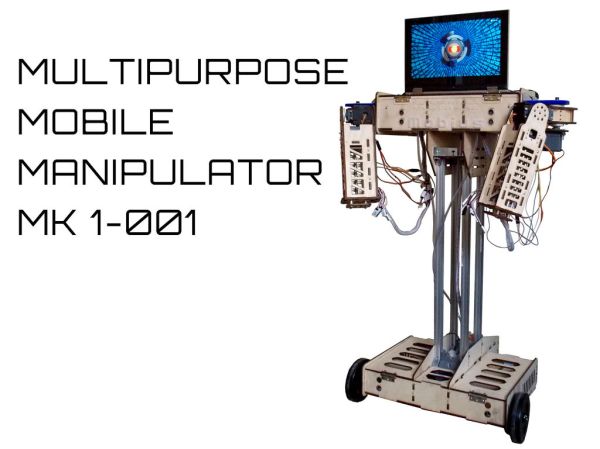 As the cost of almost every technology comes falling down, from electronics to batteries to even tools like 3D printers, the cost to build things formerly out of reach of most of us becomes suddenly very affordable. At least, that’s what [John Choi] has found by building a completely DIY general purpose robot for around $2000.

OK, so $2000 isn’t exactly “cheap” but considering that something comparable (like Baxter) costs north of what a new car would cost means that [John] has dropped the price for a general-purpose robot by an order of magnitude. And this robot doesn’t skimp on features, either. It has a platform that allows it to navigate rooms, two manipulating limbs with plenty of servos, a laptop “head” that allows for easy interface, testing, and programming, and an Arduino Mega that allows it to interface with any sensors or other hardware with ease. It’s also modular so it can be repaired and transported easily, and it uses open source software and open hardware so it’s easy to build on.

This robot is an impressive piece of work that should help bring this technology to more than just high-end factories and research labs. They’ve already demonstrated the robot watering plants, playing the piano, picking things up, and many other tasks. We’d say that they’re well on their way to their goal of increasing the number of students and hobbyists who have access to this technology. If the $2k price tag is still too steep, though, there are other ways of getting into robotics without diving headfirst into a Baxter-like robot.

END_OF_DOCUMENT_TOKEN_TO_BE_REPLACED

There is a lot to be said for replacing certain kinds of jobs with robots. Most people would agree that replacing physical human labor with automation is a good thing. It’s especially good to automate the dangerous kinds of labor like some facets of factory work. What about automation in fields that require more mental labor, where physical strain isn’t the concern? Is replacing humans really the best course of action? A year ago, a video called Humans Need Not Apply set forth an explanation of how robots will inevitably replace us. But that narrative is a tough sell.

Whether it is even possible depends on the job being automated. It also depends on how far we are able to take technology, and the amount of labor we are willing to offload. Automation has been replacing human workers in assembly and manufacturing industries for years. Even with equipment and upkeep expenses, the tireless nature of robotic workers means dramatically lower overhead for businesses.

Many of the current forms of factory automation are rather dumb. When something goes wrong and their task is compromised, they keep chugging away. That costs time and money. But there are companies out there producing robots that are better on many levels.

May Your Robot Overlords Be Cute and Cuddly

In 2013, Rethink Robotics started filling orders for a new line called Baxter. They are a class of general purpose robot that can be programmed to do many kinds of manual tasks. Baxter bots have vision, and they can learn how to do a job simply by watching. They don’t need to be programmed in the traditional sense.

Baxter even has a face – a screen that shows different expressions depending on his state. When he’s in the midst of a task, his eyes are cast downward. If something goes wrong, he stops what he’s doing. His cartoon face appears sort of shocked, then sad. He goes into safe mode and waits to be fixed.

END_OF_DOCUMENT_TOKEN_TO_BE_REPLACED When [Robert] realized Adafruit is now selling analog feedback servos, he decided he just had to make a programmable robot arm that could be trained like the commercially available Baxter robot.

The neat thing with the analog feedback servos is it takes all the complexity out of training a robot. All you have to do is put the robot in teach mode, physically move the robot’s joints to the positions you want, and save your program! Depending on your application, it certainly beats trying to work out the fun kinematics equations…

Anyway, the full guide available on Adrafuit’s learning system provides instructions on how to build your own arm from scratch (well, with a 3D printer) or how to replace the servos in a pre-made toy robotic arm you might already have sitting around. It’s very thorough and includes all the code you need for your Arduino too.

Stick around after the break to see how the robot works!