Where does a cell phone come from, anyway? Well, there are four main parts: the case, motherboard, screen, and battery. With those in hand, plus some fiddly assembly, you’re done. Except you’re not. Through the course of our talk, Scotty mentions the need to laser off the anodization from the back of the case, because it’s used as an antenna and needs electrical contact. But where do those four parts come from? A screen isn’t just a screen, but a stack-up of LCD, digitizer, polarizers, and so on. Assembling these properly from their component parts requires tooling, and an even deeper trip down the rabbit hole, which of course meant a trip to see someone in a screen repair shop. All of which are, of course, nearby.

In the end, he’s got an iPhone, just like any other, but it’s his phone. And you can have your own phone too. 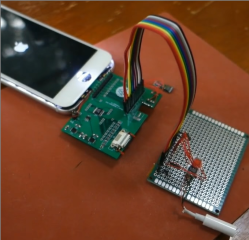 Scotty’s takehome for hackers is to not be intimidated by smartphones. After all, they’re just small computers inside a case, and they’re designed to be put together by normal people on an assembly line. They’re absolutely more fragile but if you take your time with it, there are user-serviceable parts inside. And come to think of it, we’d like to see more smartphone hacks.

So check out Scotty’s Superconference talk, where he also goes into adding an earphone jack to an iPhone and many tips and tricks he discovered along the way. Then let us know what your next smartphone project is going to be.