It’s been fifty years since man first landed on the Moon, but despite all the incredible advancements in technology since Armstrong made that iconic first small step, we’ve yet to reach any farther into deep space than we did during the Apollo program. The giant leap that many assumed would naturally follow the Moon landing, such as a manned flyby of Venus, never came. We’ve been stuck in low Earth orbit (LEO) ever since, with a return to deep space perpetually promised to be just a few years away.

But why? The short answer is, of course, that space travel is monstrously expensive. It’s also dangerous and complex, but those issues pale in comparison to the mind-boggling bill that would be incurred by any nation that dares to send humans more than a few hundred kilometers above the surface of the Earth. If we’re going to have any chance of getting off this rock, the cost of putting a kilogram into orbit needs to get dramatically cheaper.

Luckily, we’re finally starting to see some positive development on that front. Commercial launch providers are currently slashing the cost of putting a payload into space. In its heyday, the Space Shuttle could carry 27,500 kg (60,600 lb) to LEO, at a cost of approximately $500 million per launch. Today, SpaceX’s Falcon Heavy can put 63,800 kg (140,700 lb) into the same orbit for less than $100 million. It’s still not pocket change, but you wouldn’t be completely out of line to call it revolutionary, either.

Unfortunately there’s a catch. The rockets being produced by SpaceX and other commercial companies are relatively small. The Falcon Heavy might be able to lift more than twice the mass as the Space Shuttle, but it has considerably less internal volume. That wouldn’t be a problem if we were trying to hurl lead blocks into space, but any spacecraft designed for human occupants will by necessity be fairly large and contain a considerable amount of empty space. As an example, the largest module of the International Space Station would be too long to physically fit inside the Falcon Heavy fairing, and yet it had a mass of only 15,900 kg (35,100 lb) at liftoff.

To maximize the capabilities of volume constrained boosters, there needs to be a paradigm shift in how we approach the design and construction of crewed spacecraft. Especially ones intended for long-duration missions. As it so happens, exciting research is being conducted to do exactly that. Rather than sending an assembled spacecraft into orbit, the hope is that we can eventually just send the raw materials and print it in space.

It took more than 20 years and 36 Space Shuttle launches to assemble the International Space Station in its current form, but added together, all of the modules only have a mass of around 400,000 kg. If we only had to deal with total mass, that is if it was somehow possible to liquify a space station and cart it to orbit in a more dense form, commercial rockets like the Falcon Heavy or Blue Origin’s New Glenn could do the job in a handful of flights.

Obviously, there’s no technology that would allow us to reconstitute a functioning space station or Mars transfer vehicle from a payload fairing full of goo. But even with current fused deposition modeling (FDM) 3D printing technology, researchers believe we should be able to create large orbital structures. Imagine launching a rocket filled to payload capacity with a store of feedstock and a robotic printer that can extrude and assemble structural members from it.

With such an arrangement, a single heavy-lift rocket could potentially hold enough raw material to print a truss structure far larger than anything humanity has ever put into space. Once the printed frame was completed, subsequent launches could deliver and install equipment such as solar arrays and living modules for the crew. While the design would still require substantial assembly on Earth, being able to autonomously construct the spacecraft’s “skeleton” in orbit would offer immense time and cost reductions.

It might sound like science-fiction, but that’s precisely the capability that Made In Space of Mountain View, California was recently awarded a nearly $74 million contract from NASA to demonstrate. The company plans to launch a satellite, named Archinaut One, within the next few years that builds on the 3D printing techniques they pioneered aboard the International Space Station in 2014. Once in orbit, it will construct two beams that extend 10 meters (32 feet) out from both sides of the craft. If successful, Archinaut One would have a “wingspan” to rival that of the Space Shuttle; despite riding into space inside the diminutive 1.2 meter fairing of a Rocket Lab Electron.

During the development of the Apollo program’s massive Saturn V rocket, Wernher von Braun had a remarkable idea. Rather than discarding the second stage of the rocket once its propellants had been expended, what if it could be used as a stand-alone space station?

He reasoned that its cavernous liquid hydrogen tank would offer the astronauts more than enough room to live and work in, all they needed to do was vent the remaining gas into space. A crew launched on a second rocket would then open a hatch in the top of the tank and insert a large “equipment module” that had fixtures, equipment, and a docking port.

This hypothetical station, called a “Wet Workshop” since it would travel to space filled with liquid hydrogen, unfortunately never left the drawing board. In the end, NASA opted to outfit the third stage of Saturn V as a self-contained space station while it was still on the ground, and launch it directly into space. This so-called “Dry Workshop” eventually became Skylab, America’s first space station. 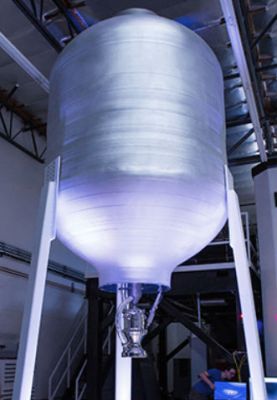 While it might not be as “Wet” as Wernher von Braun envisioned all those years ago, 3D printing could eventually allow us to construct space stations using a similar principle. Companies like Lockheed Martin and Relativity Space are already 3D printing propellant tanks for rockets here on Earth. If Made In Space is successful in their attempts to print truss structures in orbit, a space-optimized version of this tank manufacturing technology may be a logical next step.

If hollow cylinders of sufficient strength and diameter can be printed in space, they could have hatches installed on both ends and be pressurized. After checking them for leaks, human crews could install the internal equipment and fixtures necessary to turn them into functional modules for a station or deep space vehicle. These printed modules could be made in arbitrary lengths to suit the intended mission, including lengths far greater than could be contained within the payload fairing of any operating or proposed rocket.

The Moon, and Beyond

Structures 3D printed in orbit might well play a part in returning humanity to the Moon, and eventually, moving on to Mars. The potential cost savings of being able to launch rockets filled to the brim with raw building materials is simply too great to ignore. There are certainly technical challenges ahead, but nothing that seems insurmountable given the research already conducted on FDM printing aboard the ISS.

But no matter how humans get to our nearest celestial neighbor or the Red Planet, they will almost certainly find 3D printing to be an invaluable tool. While we’re still learning the ropes of printing in space, we already have decades of experience when it comes to additive manufacturing on solid ground. The reduced gravity of the Moon or Mars won’t fundamentally change the physics of FDM, and the local materials might even be a suitable “filament” for fusing into large structures.

So whether it was used to build the space station where they trained, the vehicle they left Earth in, or the structure where they conducted their surface research, one thing seems absolutely certain: 3D printing is going to be an invaluable tool for humanity’s future offworld.

59 thoughts on “Why Spacecraft Of The Future Will Be Extruded”