While the jury is still out on 3D printing for the consumer market, there’s little question that it’s becoming a major part of next generation manufacturing. While we often think of 3D printing as a way to create highly customized one-off objects, that’s a conclusion largely based on how we as individuals use the technology. When you’re building something as complex as a rocket engine, the true advantage of 3D printing is the ability to not only rapidly iterate your design, but to produce objects with internal geometries that would be difficult if not impossible to create with traditional tooling.

So it’s no wonder that key “New Space” players like SpaceX and Blue Origin make use of 3D printed components in their vehicles. Even NASA has been dipping their proverbial toe in the additive manufacturing waters, testing printed parts for the Space Launch System’s RS-25 engine. It would be safe to say that from this point forward, most of our exploits off of the planet’s surface will involve additive manufacturing in some capacity.

But one of the latest players to enter the commercial spaceflight industry, Relativity Space, thinks we can take the concept even farther. Not content to just 3D print rocket components, founders Tim Ellis and Jordan Noone believe the entire rocket can be printed. Minus electrical components and a few parts which operate in extremely high stress environments such as inside the pump turbines, Relativity Space claims up to 95% of their rocket could eventually be produced with additive manufacturing.

If you think 3D printing a rocket sounds implausible, you aren’t alone. It’s a bold claim, so far the aerospace industry has only managed to print relatively small rocket engines; so printing an entire vehicle would be an exceptionally large leap in capability. But with talent pulled from major aerospace players, a recently inked deal for a 20 year lease on a test site at NASA’s Stennis Space Center, and access to the world’s largest metal 3D printer, they’re certainly going all in on the idea. Let’s take a look at what they’ve got planned.

The Promise of Additive Manufacturing

Relativity Space isn’t the first company to realize 3D printing in metal could be a revolution for rocket engine design. During the reveal of the Dragon V2 in 2014, SpaceX CEO Elon Musk commented that certain weight-saving elements of the vehicle’s SuperDraco engines, such as the chamber’s internal cooling channels, were made possible by the ability to print with superalloys such as Inconel.

“It’s a very complex engine, and it was very difficult to form all the cooling channels, the injector head, and the throttling mechanism. Being able to print very high strength advanced alloys, I think, was crucial to being able to create the SuperDraco engine as it is.”

If expanding the concept to the entire rocket proves viable, the advantages could be immense. Relativity Space believes they could eventually go from raw materials to a completed rocket in as little as 60 days, compared to the months or even years it takes other manufacturers to assemble their vehicles. This rapid production cadence, along with the capability to augment the rocket’s design on a case by case basis, promises to offer a uniquely bespoke experience for customers.

Not only would printing the rockets be faster than assembling them via traditional means, it would also be simpler. Parts designed for additive manufacturing don’t necessarily need to adhere to the traditional design paradigms. Rocket components which previously would have needed to be designed as several parts to be welded together by human workers could conceivably be redesigned for printing as a single unit. This allows for a sharp reduction in not only the number of individual components required, but the human effort in assembling them.

This plays into the company’s long term goals of actually assembling rockets on Mars. They believe that this rapid and largely automated method of building rockets lends itself to off-world colonies, and envisions a future where return rockets from the Red Planet are actually manufactured there, allowing for smaller and more simplistic “one-way” vehicles to be sent from Earth.

You can’t print something as big as rocket without a massive printer, so one of Relativity Space’s first milestones was the completion of what they call Stargate: the world’s largest metal 3D printer. Taking up an entire room, it doesn’t look anything like the 3D printers most of us are familiar with. Made up of three Kuka robotic arms (the type generally used to assemble automobiles) carrying lasers, cameras, and sensors, Relativity claims Stargate is able to print faster and smarter than anything else on the market. Using machine learning, Stargate is able to visually identify and correct for printing defects and modify future runs; so the longer it prints, the better it gets at it. 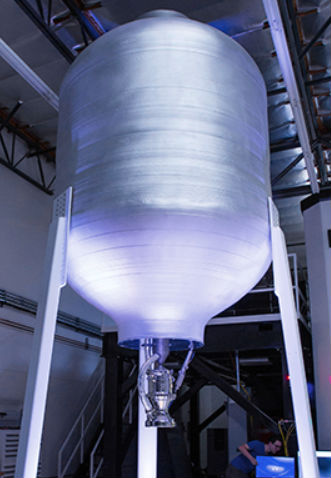 Stargate hasn’t managed to print a rocket yet, but it has printed the principle parts for the company’s Aeon engine which develops 15,500 pounds of thrust at sea level. While small compared to something like the Falcon 9’s Merlin, it has roughly three times the thrust of the Rocket Lab Rutherford engine which is also 3D printed. Requiring less than 100 total parts to assemble, and printable in under 20 days, the Aeon engine has performed over 100 test fires so far at Stennis Space Center.

They’ve also printed a massive fuselage structure, which on the final rocket would make up the lower half of the second stage. This proposed rocket, named Terran, would use a single Aeon engine on the second stage and a cluster of nine on the first stage; an increasingly common arrangement on New Space rockets.

Terran would also make use of autogenous pressurization for its oxygen and methane propellants, which eliminates the need for a complicated dedicated system to pressurize the tanks with another gas (usually helium or nitrogen). Between systemic simplifications and the fact that the fuselage and propellant tanks would be printed on Stargate, Relativity Space estimates the total number of components in the Terran rocket could be reduced to 1/100th that of contemporary vehicles.

Straining Belief, if not Technology

Ultimately, Relativity Space isn’t proposing anything that hasn’t been done before, at least in some form or another. SpaceX and Blue Origin are currently building and firing engines built with additive manufacturing as part of their next generation vehicles, and Rocket Lab has already put a payload into orbit with their 3D printed engines. Lockheed Martin has already shown that 3D printed propellant tanks can meet or exceed NASA’s performance and reliability requirements for spacecraft components.

The core principles of 3D printing rockets are therefore largely old news, in the grand scheme of things. Relativity Space simply wants to do it bigger. To take the small steps made by other manufacturers, and combine them into a giant leap. Can they do it? Probably. There doesn’t seem to be any technical barrier in the way, at least. But will it really create rockets cheaper and faster? That seems less clear.

Printing the engines, and even propellant tanks, certainly has merit; these are components that require high manufacturing tolerances and expensive tooling. But elements such as the fuselage and fairings seem to be poor candidates for additive manufacturing, especially compared to existing carbon fiber manufacturing techniques. With only two years to go before Relativity Space hopes to launch their first Terran rocket, we might not have to wait long to see how many 3D printed components make it into the final vehicle, and how much of their initial plan ended up being little more than buzzwords to entice investors.