Gravity of the Situation

This video happened 2019/10/20 in Shantou, China, and shows a charging electric scooter experiencing some rapid unscheduled disassembly. Play with sound, but maybe turned down a bit. Notice also the fire extinguisher in the bottom right, as if this was perhaps not an unexpected event.

What’s happening is thermal runaway, where the battery gets too hot and so it starts self-destructing, igniting the electrolyte, which then releases energy, creating more heat, which causes more self-destruction of nearby cells. This can happen in a variety of ways:

All three are from lots of energy moving very quickly and generating too much heat. If you’re interested in exactly what is happening inside the lithium cells, we’ve covered this in more scientific detail in the past. But even without understanding the chemistry we’ve seen the consequences through notable events like when the failing Note 7 batteries were causing problems a few years ago and led to changes in airline policies with certain devices.

In addition to the threat of fire, toxic gasses are released during this fulmination. Cells contain a quantity of fluorine, which reacts to form hydrogen fluoride in significant quantities, making the smoke from an event an immediate danger to life or health, especially in confined spaces.

Electric vehicles have been rolling off assembly lines and into garages at an ever-increasing pace. The energy potential in each vehicle is immense and there is much research into Lithium Ion battery chemistry aimed at significantly improving lifetime, and the integrity of the cells. There has also been a lot of research into what levels to charge and store the battery. It shouldn’t be charged up to 100% all the time, with a 50-70% charge recommended for long storage periods.

Knowing HOW the batteries detonate, we can do some things to discourage them, and design that into the cells and packs. At the cell level, the first protection is in the separator itself, which keeps the anode and the cathode from touching each other. This insulating layer is designed to be porous enough to absorb the electrolyte and allow the lithium ions to pass through, and when heat builds up can even close the pores to shutdown transfer. But its main job is to keep the peace between the anode and cathode.

Outside of the chemistry, the cell is usually covered in some protective layers, which can be a metal pouch for aptly named pouch cells or a metal canister for cylindrical cells. Both try to avoid punctures, and contain any gases that may develop. They may need to vent that gas if too much pressure builds up, so enclosures should be able to expand a little to accommodate a swelling battery, and provide a means for gas to vent safely if it does build up enough pressure. If the gas doesn’t vent then it could explode. It’s coming out either way.

Another safety precaution is the protection circuit, which can be applied to individual cells for the most safety, or to multiple cells if they are balanced. We covered a DIY cell protector a couple years ago. These circuits can monitor temperature, current, and voltage, and shut down the cell if any of them get outside of safe ranges. Most battery packs will have these circuits built into them by default; you’ll have to specify a bare unprotected pack if you really want one.

Outside of the pack itself, it’s generally wise to have additional protection circuitry that can prevent the pack from ever getting to a point where it needs to shut itself off. If the device can sense the problem before the pack shuts off power, it can correct it and still provide an interface to the user and shut down gracefully. Monitoring current, temperature, and voltage on the main board can help with this.

Treat Them with Care and Know How to Dispose of Them

Naturally, they should not be used or stored in such a way that they will be exposed to high heat. They should be protected from impact, especially sharp conductive impacts. They should be charged carefully and under supervision with a reliable charger. For larger packs, they probably shouldn’t even be inside a residence when charging, in case of occasions exactly like the video above. Pouches that are puffed are no longer safe and should be disposed of. Batteries that are old and no longer work can still be dangerous.

Here’s what happens when a pouch battery gets cut. This is an extreme example; even nicking it with a knife can damage a separator layer, which may eventually allow the anode and cathode to touch and cause an internal short. In this video they just speed that process up a lot and release some toxic fumes in the process.

Disposing of Li-Ion batteries isn’t difficult, but most people aren’t doing what they should be. The battery should be separated from the rest of the gadget in as safe a way possible. (Chuck the power tool but not the battery pack, but don’t break your phone in half trying to extract the battery.) Then the leads should be taped so that they can’t touch each other or short on some other conductor. Bring them to a place that can recycle them, like many home improvement stores or electronics recyclers. Throwing them in the garbage can be really bad because of the possibility that trash compactors and other processes will damage them and cause garbage fires. Plus we want to avoid all of the nasty chemicals ending up in the landfill.

There’s some conflicting thought here. On the one hand, your safety and the safety of others is paramount, and the gasses released by a burning pack are dangerous and possibly toxic, especially in confined quarters. If things are bad, you should get out and alert others and the authorities. On the other hand, you don’t want to lose everything if you have a fighting chance, quick action could resolve the situation, and you’re able to make your own decisions, or maybe you’re on a plane and you can’t really escape. 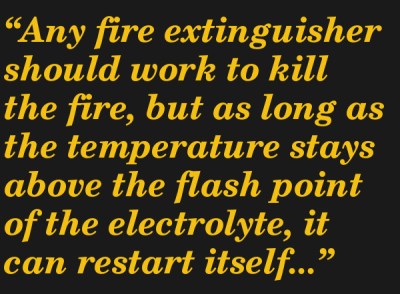 Lithium-ion battery fires can be class A, B, or C fires. They will burn on their own, are made of combustible materials, and have flammable liquids and solvents. When they involve energized electrical equipment (the charger), they attain class C. With things plugged into a wall, you do not want to use water, as that only makes electrical fires more dangerous. However, for packs alone and not energized externally, water is an effective solution. It puts out the fire, and it reduces the temperature of the pack so that it can’t re-ignite itself. Any fire extinguisher should work to kill the fire, but as long as the temperature stays above the flash point of the electrolyte, it can restart itself, possibly hours, and in the case of electric vehicles, days later.

You may be wondering why it’s not a class D fire, which is a combustible metal fire. If we were talking about primary lithium batteries, the non-rechargeable kind, then it would be a class D fire requiring a dry powder extinguisher (or smothering in sand or other non-combustible material that isn’t water). But the amount of Lithium in a Lithium-ion battery really isn’t high enough or concentrated enough, and it just never gets to a point where the lithium itself is igniting.

In a cases where you’re concerned a battery might be in a dangerous state, the best way to handle it may be to first dump it into a container and take the container outside to a safe place where you can then work on putting out any fire that develops without endangering yourself or any buildings.

The video of the electric bike fire mentioned earlier shows a surprisingly good reaction. The person unplugs the pack first, giving them more options and reducing the likelihood of exacerbation of the conflagration. You can see them grabbing the fire extinguisher on their retreat, probably so they can arm it in safety. Then they return and put out the fire. It reignites and they hit it again. Someone opens the door to get some ventilation and remove the smoke.

In the aftermath they should bring the bike and themselves outside where there are no combustibles and the pack can exhaust whatever fumes it has remaining. They should air out the entrance area without spending much time in it. And they should soak the battery for a long time in water to cool it down.

A much more detailed guide can be found in this paper on Li-Ion Battery Fire Hazards and Safety Strategies. As we continue to surround ourselves with Lithium battery powered devices, having a working understanding of the treatment, the warning signs, and the appropriate response is a good idea for everyone.

80 thoughts on “Lessons In Li-Ion Safety”