The press release claims that the VR goggles were modified from commercially available hardware to take into account the shape and size of a cow’s head, but there’s no word of which product served as the basis for the experiment. Given the massive size of the goggles in relation to the cow’s human handler though, it’s safe to assume that whatever headset was used is being completely obscured by the obviously custom enclosure. 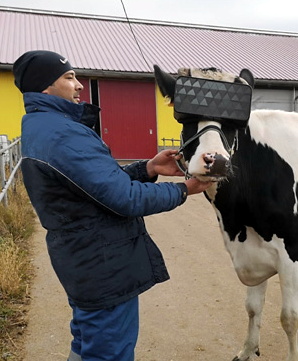 That said, because we can see no obvious cables coming from the headset, it’s possible researchers using some variant of the phone-based VR goggles that were all the rage after the release of Google Cardboard. We’ve noticed that excitement over these simple gadgets has waned significantly in the last year or so, but here the idea makes perfect sense. If you’re looking to outfit whole herds of animals with this technology, a basic plastic enclosure that holds a cheap Android device makes perfect sense.

One also has to wonder what sort of optics are required to fool a cow into thinking they’re looking at a real pasture. Like many prey animals, a cow’s binocular vision is minimal when compared to human vision. In other words, they have limited depth perception when looking directly ahead. In fact, it’s said that cows have trouble discerning shadows from actual holes in the ground, and will avoid walking over them. On the other hand, they have excellent panoramic vision which allows them to see nearly 360 degrees without having to move their heads.

Accordingly, it seems there would be little need for the sort of stereoscopic optics used in even low-cost VR headsets. A more likely arrangement would perhaps be a large-format phone (or small tablet) behind a Fresnel lens that would expand the image to fill the cow’s field of view. Since the goggles don’t appear to wrap around the cow’s head it seems unlikely it could provide much more than a 180 degree view for the animal, but that may still be enough to achieve the desired effect.

It might seem like this technology is a stretch, but one could argue that it’s simply the logical evolution of what dairy farmers have already been doing for decades. For nearly as long as humans have been keeping cows domestically, it’s been known that they seem to enjoy listening to music. In the early days farmers would actually play instruments for their herds, but as technology improved, they installed loudspeakers and piped in recorded audio.

In an oft-referenced 2001 study, psychologists from the University of Leicester observed a 3% increase in milk production in cows that were exposed to slow, relaxing music during the day. That might not seem like a lot on a small scale, but when multiplied by thousands of cows, it’s certainly worth the cost of a few speakers. The science behind this is still not fully understood, and the psychologists explained the experiment was designed primarily to fact-check the anecdotal claims of farmers who were already serenading their animals.

The general consensus is that nervous and agitated cows produce less milk, so anything that can calm them down should result in a noticeable increase in yield. Some even claim the taste of the milk is improved when the animal is more relaxed, but there’s even less science to back up that idea.

Given this, the idea that providing the cows with visual stimulation to go along with the music that many farmers are already playing for them doesn’t seem completely unreasonable. The press release claims that researchers have already found wearing the VR headset seems to improve the cow’s general mood. In the future, a more comprehensive study will be performed to see how much it actually increases milk production over existing techniques.

Even so, it’s hard to look at this experiment and not see it as needlessly complex. After all, humans have been managing to coax milk out of cows for all of recorded history without any video game trickery. But of course, the demands of modern farming are quite a bit different than the idyllic mental images most of us have. If you’re picturing something that looks like what they put on the carton: a handful of cows meandering around a wide-open pasture, complete with grain silos and a windmill in the background; the reality of a high-yield dairy farm might come as something of a shock.

It could be that providing the cows with a vision of a somewhat less dystopian environment might make life in captivity easier for them. If this sounds a bit like the plot of The Matrix, that’s because it literally is. As depressing a realization as it may be, putting cows into a virtual environment where they can forget they’re being mechanically drained of their bodily fluids in service of a technologically superior species might be the nicest thing we can do for them.

From a purely practical standpoint it seems like lining their pens with high-definition displays showing scenes from a spring meadow would make more sense than equipping each cow with an individual video system, but perhaps the simulation wouldn’t be accurate enough. Like Morpheus said, “No one can be told what the Matrix is. You have to see it for yourself.”