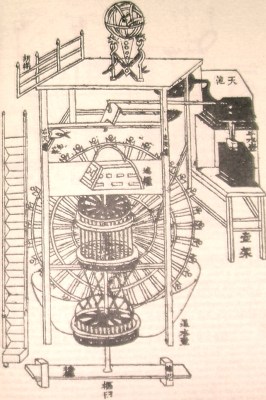 In 1066, the Chinese inventor [Su Song] constructed a water clock consisting of a tower with mechanical features that would chime the hours. The tower had programmable drums with pegs that would bump into levers to operate the percussion instruments. Later, in the 13th century, Muslim scientist [Ismail al-Jazari] created a humanoid waitress that could serve tea to customers. Drinks were stored in a reservoir tank. The drinks would drip from a bucket into a cup, which the waitress could then serve through an open door. Centuries later, [Leonardo da Vinci] would sketch plans for a mechanical knight that would sit up, wave its arms, and move its head. 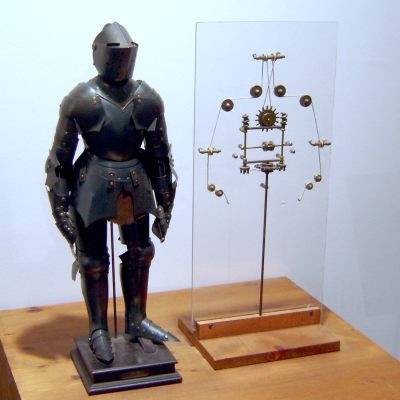 It wasn’t until 1920, however, that the term robot began being used to describe these automata. The Czech writer [Karel Čapek] published a play titled R.U.R. about artificial bodies without souls, which borrowed their name from the Czech word for peasant slaves (“robota”). The story told of mechanical men working on factory assembly lines who rebelled against their human masters, a recurring storyline in what would become a major sub-genre of science fiction writing.

In 1932, inventor [W. H. Richards] exhibited one of the first humanoid robots at the Model Engineers Society in London. The frame consisted of an aluminum body with eleven electromagnets and a motor powered by a 12 V power source. In 1948, [William Grey Walter] from the Burden Neurological Institute in Bristol created the first complex autonomous robot, based on his theory that the connections between brain cells could give rise to complex behaviors. Elmer and Elsie, the robotic tortoises, were constructed with a phototropic plastic shell that doubled as a bump sensor. The devices showed the interaction between a light sensitive and touch sensitive control mechanism mimicking nerve cells with tactile and visual input. The systems interacted well enough that the tortoises appeared to exhibit behavior when navigating around obstacles.

While there is contention over the exact origins of the field, the notion that analog electronics could simulate brain processes – an idea [Alan Turing] and [John von Neumann] were also famed for entertaining – may have jump-started subsequent robotics research. 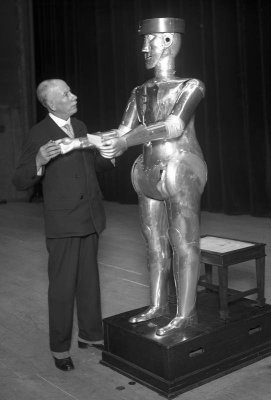 Kentucky inventor [George C. Devol] is often credited with creating the first modern robot in 1954, known as Unimate. The robot was the first industrial machine, working on a General Motors assembly line. With the help of his business associate [Joseph Engelberger], the pair started the first robot manufacturing company. The job of the robots was to transport die castings from an assembly line and weld the parts onto auto bodies. It was a particularly useful task to automate since the work was especially dangerous for human workers, who could be poisoned by toxic fumes or injured if they weren’t careful.

As far as robotics research goes, the scientific study remains an interdisciplinary branch between mechanical engineering, electrical engineering, and computer science. Much of the theory that plays into the field is borrowed from aspects of controls, design, information processing, and other subfields of these branches. Given how wide the applications of robotics can be – from autonomous vehicles to prosthetics to industrial robots – the many branches of robotics span numerous adjacent fields.

The most famous laws of robotics were probably those proposed by [Asimov] – the Three Laws of Robotics:

Second Law: A robot must obey the orders given it by human beings except where such orders would conflict with the First Law.

Third Law: A robot must protect its own existence as long as such protection does not conflict with the First or Second Laws.

These laws governed the underlying universe behind Asimov’s robot stories, intended as a safety feature for their interactions with humans and one another. Whenever one of his robots would act counter-intuitively, it was often a direct consequence of one of the laws being applied to the situation. While they may have originated as a facet of fiction, they have become incorporated into the study of the ethics of artificial intelligence as well.

As the study of robotics has matured and incorporated more applications of research into artificial intelligence and intelligent agents, the ideas of ethics has become more prominent as a real barrier to further work in the field. While early robots may have been hard-wired to perform certain rote actions, as robots have become more free agents with the ability to select actions based on their optimizations of reaching certain goals, the subtleties of the algorithms used to govern these actions has come more into question. Questions in the ethics of AI tackle ideas from whether artificial general intelligence is possible, whether the machines are inherently dangerous and if there are ways to curb this danger, and whether machines have some semblance of a consciousness and certain rights. The same ideas covered by Black Mirror are very much real problems that today’s philosophers are dealing with solving.

As for the current state of robotics research, opinions range widely depending on who you ask. As one analogy puts it, tasks that are difficult for a human adult – such as quickly identifying differences in a vast database – can be easy for a robot. However, tasks that are easy for a human baby – such as grasping and throwing a ball – can be nearly impossible for robots. Even in rescue work, robots may not be ready to act as the sole responders simply due to deficiencies in their speed, versatility, and ease of use.

The biggest change and future outlook for robotics is probably the level to which autonomous agents will invade our society. With the rise of global opportunities for companies capable of building better state-of-the-art technologies for transportation, manufacturing, medicine, and other high-profit fields, there will only be more robots deployed in roles that were once filled by human workers. We may not be living in a robot dystopia proposed by [Asimov] just yet, but it isn’t just science fiction anymore.

26 thoughts on “The Birth Of The Modern Robot”