You’d think that being quarantined in your home would be perfect for hackers and makers like us, as we all have a project or two that’s been sitting on the back burner because we didn’t have the time to tackle it. Unfortunately, some are finding that the problem now is actually getting the parts and tools needed to do the job. When there’s a bouncer and a line outside the Home Depot like it’s a nightclub on Saturday night, even the simplest of things can be difficult to source when making in the time of COVID.

Which is exactly the situation I found myself in recently when I needed to drill a bunch of holes to the same depth. The piece was too big to put in the drill press, and while I contemplated just wrapping the bit in some tape to serve as a makeshift stop, I wasn’t convinced it would be accurate or repeatable enough. It occurred to me that a set of drill stop collars would be easy enough to design and 3D print, but before I fired up OpenSCAD, I decided to see what was already available online.

Which is how I found the “Collet Drill Stop” from Adam Harrison. Rather than the traditional ring and setscrew arrangement, his design uses a printable collet that will clamp down on the bit at an arbitrary position without tools. So not only could I avoid a trip to the store by printing this design out, it looked like it would potentially be an upgrade over what I would have bought.

Of course, it’s wise not to take anything for granted when dealing with 3D printing. The only way I could be sure that Adam’s design would work for me was to commit it to plastic and try it out.

Plastic is great for many applications, but terrible for others. Unfortunately it’s the only thing our desktop 3D printers can squirt out right now, so that means it often gets pushed into service when it really shouldn’t.

But that’s not really the case here. There will never be any serious load placed on the drill stop, it just needs to hold onto the bit securely enough that it doesn’t slide around. There’s no reason plastic can’t be used for this application, assuming you’ve got the right kind.

Which is where some people might get stuck with this design. As Adam explains, you really need to use two different plastics for this to work: a stiff plastic for the two-sided nut, and a soft and semi-flexible one for the collet itself so it can be squeezed down. He recommends PLA and PETG respectively, which is what I personally went with. For the collet, you want a material that can flex a millimeter or so without breaking, but it still hard enough to take some abuse.

Finally, the use of plastics for the drill stop actually has a considerable advantage over metal. The face of the PETG collet is soft enough to not mar or scratch the surface of whatever you’re drilling if you bottom out. If you’re just boring some holes in a piece of wood, it likely won’t matter, but if you’re trying to make openings in a control panel or something along those lines, it might be worth printing this out just to be sure you don’t inadvertently tear anything up.

Getting the Right Slice

Just as material selection is important for this print, so are the slicer settings. If you just print all the parts out using your normal configuration, things probably aren’t going to go very well for you. Adam recommends 100% infill on the PETG collet, which might sound like a lot, but won’t really make much of a dent on your spool given how small they are. On a Prusa i3 MK3 with default PETG settings, each collet took a little over an hour to print at 100% infill.

The nuts are a different story. A lower infill isn’t a problem for these parts, especially in PLA, but you do need to make sure you’re printing at a high enough resolution for the threads to come out cleanly.

The only problem with that is, half of each nut has no surface detail at all on it. The threads might need to get printed at 0.1 mm, but the knurled body would be more than happy with a lower resolution that doesn’t take so long to print.

Traditionally you’d just set the slicer to 0.1 mm and deal with the extended print time. But these days we’ve got tricks like variable layer height. PrusaSlicer just added automatic layer height adjustment in version 2.2.0, and if you haven’t played with it already, this print is a great example of how it can be beneficial.

When sliced with a static layer height of 0.1 mm, each side of the nut would take approximately two hours to print. But by enabling variable layer height and selecting the adaptive mode, the slicer will automatically determine where the resolution is actually needed. In the image, you can see that PrusaSlicer has rightly concluded that the detail level can be reduced on the bottom half of the nut, and turned back up when it gets to the threads. By doing a large chunk of the print at 0.25 mm, total print time was reduced to slightly over one hour.

Taking it for a Spin, Literally

So before you spend the roughly four hours necessary to print out the nut and a couple different sized collets, you probably want to know how well the thing works. Well, I’m happy to report that it more than met my expectations. 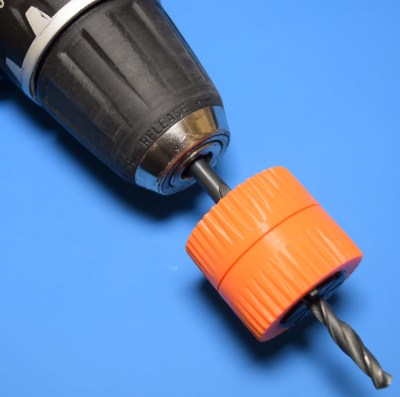 The printed threads on the nut are exceptionally smooth, and the slight flex of the PETG allows each collet to adapt to fit different sized bits while clamping down tight once the nut has been snugged up. As long as you’ve selected the appropriate sized collet, this thing isn’t going anywhere. The pressure necessary to get the stop to slide up the bit even with a hand-tightening is considerable, and certainly more than would ever be put on it while drilling.

That said, it’s not perfect. The whole assembly is rather large, so depending on the length of the bit you’re trying to use it on, you might not be able to set the appropriate depth before the rear of the nut runs into the chuck. The diameter of the nut is also wide enough that you might have trouble if you’re working in a tight spot, though that’s probably more of an edge case.

All things considered, it would probably be a stretch to say that Adam Harrison’s “Collet Drill Stop” is actually better than a simple set of metal collars. But the tool-free design is certainly very convenient, and as long as you aren’t trying to use it with very short bits, its performance should be more than sufficient for the kind of light duty work most of us get ourselves into. I know it will certainly still be in my bag of tricks long after quarantine is lifted.

Leave a Reply to But Why Cancel reply