What’s in the Leak

Getting the files to take a look at them yourself comes with a certain risk, just like having a copy of any copyrighted piece of information on your computer. Much of the legal aspects of it might be overlooked on the Internet, but that means we can’t just tell you where to get it, and we obviously can’t endorse the action. However, other people have already rooted through them and categorized everything so we can tell you what the leak contains at a glance.

Most notably, there’s a wealth of source code relating to the Nintendo WII in this leak. That includes the boot0, 1, and 2 bootloaders, plus the full source code and SDK for IOS, the operating system that runs on the Wii’s ARM9 processor. These are all low-level parts of the software side of the Wii, making the underlying system on which the Wii System Menu runs.

There’s also Verilog sources for all the parts of the iQue Player system, a hardware revision of the Nintendo 64 for the Chinese market, and consequently enough information to build a version of it from scratch. Since the company was involved in making the iQue and other projects for Nintendo, there are also extensive planning documents from the 2004-2006 era for such consoles.

Some of it could be interesting, for example, for individuals to use in order to repair their own systems, much like having the schematics to an old home computer to trace down and find where a fault is. But other than that, there isn’t much use for them, at least within legality.

Toxic for Emulator Devs, and Not All That New

If you’re one of the many people thinking this leak could finally make the ever-plagued Nintendo 64 emulation be perfect, we have bad news for you; using the official confidential documents to help build your own reimplementation of these consoles would constitute breach of copyright law. Since Nintendo is already known for not being keen on others emulating their games, and this will net you at best a cease-and-desist order, and at worst a hefty lawsuit.

In fact, many of the documents included in this leak which has caused an uproar this month, have already been floating around the ‘net for two decades now. Dubbed “The Oman Archive”, an SGI leak from 1999 exposed the source files for Project Reality, the basis for the Nintendo 64 console. Developers have had to steer clear of those documents ever since, for the same legal issues with them.

Ever since the modern console emulation scene began with Nesticle in 1997, the legality of such software has been put into question numerous times. Arguments can be had that the software is the copyrighted part, and not the arrangement of chips running it, but barely any of those internet opinions are sound legal advice, and neither is my opinion. But the main common agreement between most developers is that an emulator is legal, as long as it is completely reverse-engineered without referencing the copyrighted source material. Which is known as…

You may be familiar with this term if you’ve read about early IBM PC clones and the lawsuits surrounding them. Back in the early 1980s, IBM’s line of PCs were remarkable not only for being leaders in the business market, but also for being built entirely with off-the-shelf parts. This meant that IBM produced none of the hardware in the computer, they simply put it together and wrote a BIOS for it, and therein lay their copyright. 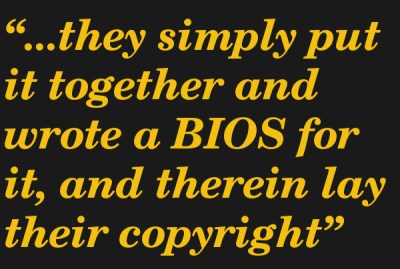 Soon enough, clones from companies such as Sanyo and DEC started appearing — but since they wrote their own BIOS none of them were fully IBM compatible, they merely ran their own flavor of MS-DOS. Eagle Computers was one such company, but instead of writing their own BIOS they were accused of cloning IBM, infringing on IBM’s copyright. It wasn’t until 1983, with Compaq and Phoenix reverse-engineering their own BIOS from scratch, that full compatibility could be achieved legally. Eagle and IBM settled out of court, with Eagle agreeing to write their own BIOS, however they never recovered from the lost sales.

The case had since then been made that in order for a clone product to remain legally protected against copyright infringement suits, it had to be completely built up from scratch without any sort of contact with the source of the material itself, merely a reimplementation of its observed behavior. More relevantly to the subject at hand, this was brought up twice against Sony’s Playstation, once with Connectix’s Video Game Station emulator and Bleem Company’s bleem! emulator. In both cases the jury ruled in favor of the defendants against Sony, cementing precedent for the legality of emulators, but in both cases the legal costs forced the companies into bankruptcy.

But the Data is Still Out There

So who is it for? Legally speaking, this should have never left the hands of Nintendo and BroadOn, so it’s hard to say if this has any use to anybody. Of course, that’s not going to stop everybody and we’re still likely to see effects of it in the future. Since the early 1990s, manufacturers of various countries have been producing clones of the Famicom (known in the west as the NES), affectionately dubbed “famiclones”. These are still produced today in various forms, and now that Nintendo’s patents on the hardware have expired, they’re more prominent than ever in the bootleg and retro markets.

It’s possible then that, through some exploitation of legal loopholes, the files describing console hardware in this leak might end up being used by cloners and we might see knock-off Nintendo 64s in the wild in a few years, but it’s impossible to predict that. At best someone not involved with the development of emulators of the systems included in the leak could use these to assess how close the reverse-engineering efforts have come to the real deal, but in the mean time, the developers themselves need to stay far away from it in order to continue to claim legality to their efforts.

34 thoughts on “No, The Nintendo Leak Won’t Help Emulator Developers, And Here’s Why”