Revenge of the Blobs

Secure in the knowledge that the Generation NEX is just a fancy NOAC system, it comes as no surprise to see the dreaded black epoxy blobs on the PCB. This is standard operating procedure for these systems, and frankly, it would have been a bigger surprise if they hadn’t been there. But still, this is a particularly bad case of the Black Blob Syndrome with five of them visible as soon as the case is cracked open. 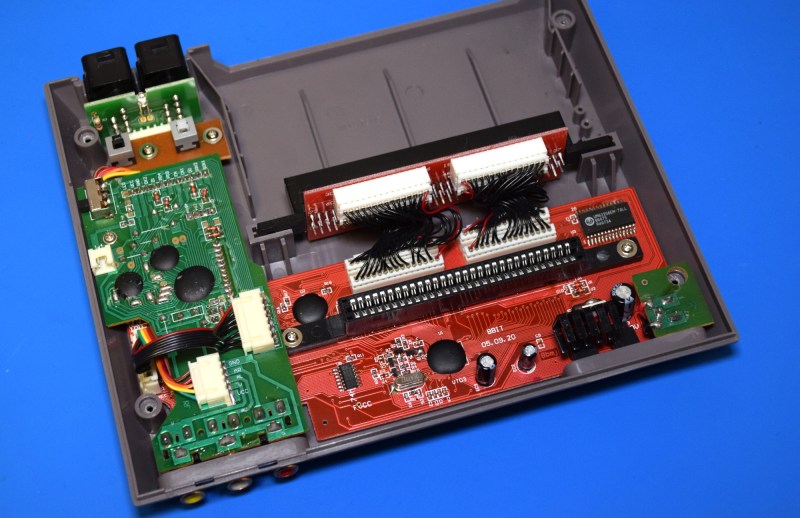 While the inside of the Generation NEX looks more or less like we’d expect, on closer inspection we can see a few differences that separate it from more modern NOAC systems we’ve explored recently.

Of course the main one is the lack of any onboard storage. The NEX only plays original NES and Famicom cartridges, and just like the original hardware doesn’t feature any sort of built-in menu system or dashboard that would require a flash chip for program storae. This might seem like something of a missed opportunity, but it’s a limitation of building an NES clone versus an emulator. The cartridge in these older machines isn’t a mass storage device, it’s a fundamental part of the circuit. Without it installed, the system simply doesn’t function. 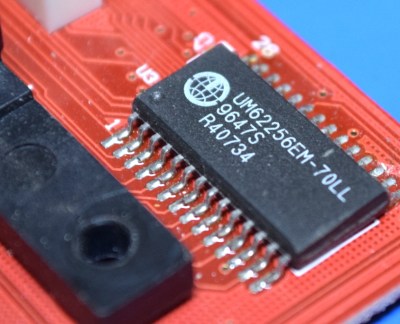 We can also see that the system’s RAM is external to the NOAC blobs. The original NES used twin 2 kB banks of memory, one for the CPU and the other for the Picture Processing Unit (PPU). But in the NEX they seem to have been replaced with a single UM62256EM-70LL SRAM chip. It’s not immediately clear why this component needed to remain an external device, but it’s probably safe to assume it was simply cheaper.

If we’re feeling particularly charitable, we could allow ourselves to believe that Messiah wanted the ability to upgrade the system’s memory on future production runs. Before the hardware was released, the company said they were actively looking into ways of offering enhanced performance for homebrew NES titles that were specifically programmed to take advantage of the NEX hardware.

While the red PCB contains all of the standard NOAC hardware, the second green PCB appears to be home to all of the “secret sauce” features of the Generation NEX. Namely, the integrated receiver for the 2.4 GHz controllers and the stereo audio connectors. Given how different the design and construction of these two boards are, you have to wonder if Messiah didn’t contract the two components out to different companies. 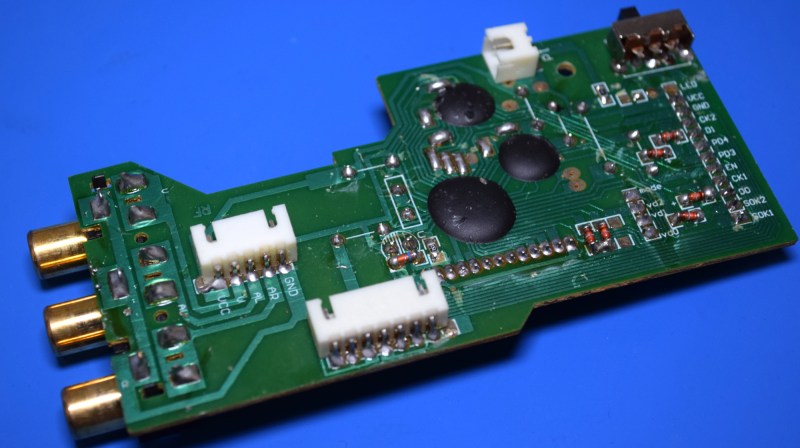 Unfortunately, there’s almost nothing of interest to report on this board. Outside of the epoxy blobs, it’s just passive components. The nRF2401 receiver is on a separate module mounted to the reverse side of the PCB, but mounted in such a way that you can only see the bottom of it.

One thing worth mentioning is that the silkscreen is fairly well labeled. We can see what each pin does on the various connectors, which is nice if you were potentially looking to swap out the NOAC board with something more powerful while reusing the audio and video connectors on the back panel.

First Day with the New Iron

As the keen-eyed reader may have noticed in the previous pictures, some of the solder work on the Generation NEX is embarrassingly poor for a commercially produced device. Without question, it’s the worst to ever pass under our gaze over the course of this teardown series. Some of the components on the green PCB seem to be held on more by force of habit than anything, and the red PCB features a particularly heinous bodge wire installation. You really have to wonder what kind of QA these boards were actually going through if these ones got the stamp of approval.

In general, the build quality on the Generation NEX is rather poor. Which makes its high sticker price, at least compared to other clones of the day, even more insulting. The system reportedly had a very high failure rate, and with work like this going out the door, it’s not hard to see why.

Messiah actually made wireless controllers for a number of classic systems before attempting to broaden their horizons into consoles, so it’s little surprise they rolled the capability to support them into the Generation NEX. It was also an easy way for them to increase profits, as the wireless controllers needed to be purchased separately and a pair cost as much as the console itself.

In any event, most people agreed that the wireless controllers were the best feature of the Generation NEX. That’s probably true, but it’s also more of a reflection on how poor the system itself is. While the controllers are serviceable, they don’t exactly impress either. The iconic directional pad has been replaced with an odd disc, and the Select and Start buttons take the form of capacitive pads for no discernible reason other than to make the controller look more futuristic. 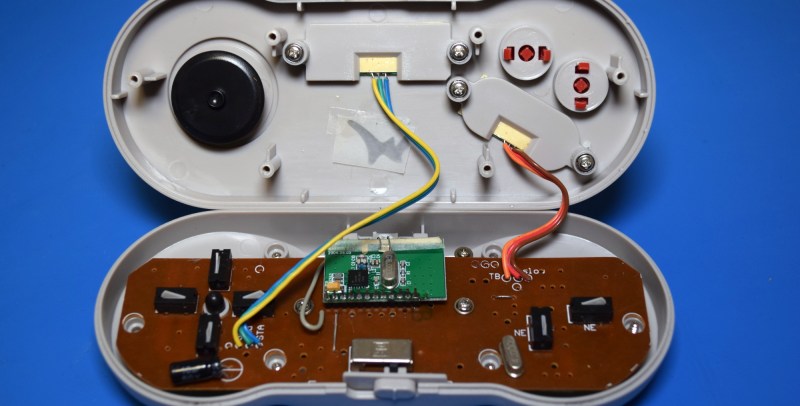 Inside we can see that there’s nothing special about the disc input device, like the capacitive pads, it’s just for show. While it might be a bit subjective, it should also be said that the switches used in this controller are particularly unsatisfying to use as they make no noise and have very little resistance.

Why can’t you just be normal?

When you forget which side of the board the LED needs to be on.

In the controller we get our first unobstructed view of the Nordic nRF2401 radio module. It probably wouldn’t be very difficult to put together a modern receiver you could use these controllers with emulators, but it’s hard to imagine why you’d want to.

What’s on the other side of the PCB? Another black epoxy blob and a handful of passives. You’re probably getting just as sick of seeing that as I was at this point, so I didn’t even bother to take a picture of it. Instead, let’s take a moment to marvel at that SMD LED soldered to stiff wire with a bit of masking tape to keep it from shorting out on the antenna of the nRF2401.

Looking at the internals of the Generation NEX just confirmed what was already known. The system was over-hyped and despite its premium sticker price, built as cheaply as possible. Perhaps Messiah had the best of intentions, but the reality is that they were simply out of their league with a project like this.

But in the end, the Generation NEX can still help bring those old games back to life. While the system as a whole might have been a disappointment, there’s little argument that Messiah nailed the look of a re-imagined NES. If there’s ever been a gadget that deserved to have its internals ripped out and replaced with a Raspberry Pi, this is it.

If you can score one of these cheap enough on eBay, just imagine it’s a kit and toss everything but the case, controller ports, and power button. That’s certainly what I plan to do with this one. With RetroPie onboard, the resurrection is nigh.