X-Bows was founded by a doctor who saw a lot of RSI issues in programmers and writers and decided to take matters into his own hands. The keyboard was born on Kickstarter in 2017 and now comes in three models. They sent me the mid-range model called The Knight, which retails for $249, but seems to be on permanent sale for $199. The top-of-the-line Knight Plus has a magnetic, detachable 10-key that can attach to either side.

It Doubles as a Melee Weapon 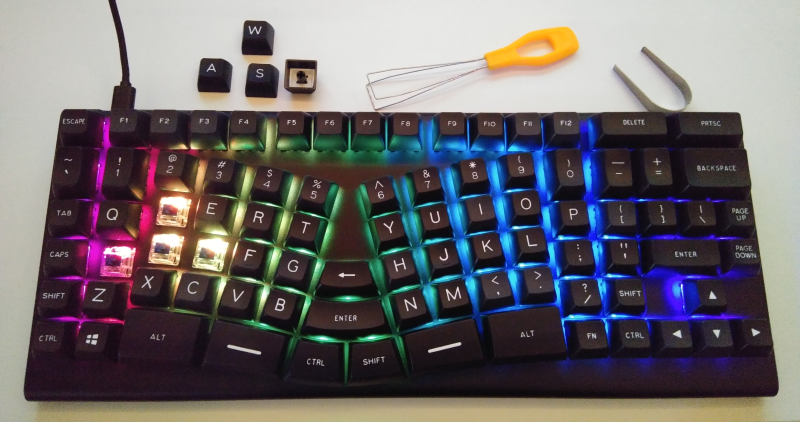 I waited and waited for this thing to show up, excited to try out a more modern, mass-produced ergo-mechanical keyboard. X-Bows ships from China, so as the pandemic progressed, I started to tell myself it just wasn’t going to make it. But after several weeks, it arrived on a rainy afternoon looking like it had been through a lot. 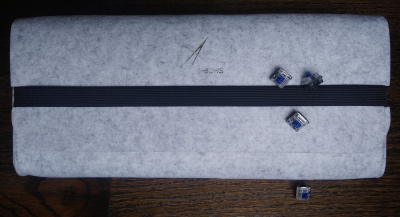 Fortunately there was another layer of protection inside the box — a carrying clutch made of thick felt that secures with a wide elastic band. It also came with some accessories: a branded keycap puller, a generic switch puller, and four extra switches. Instead of fold-out kickstands for changing the typing angle, there’s a pair of removable, rubber-coated magnetic feet that raise it by maybe 4°.

It’s all good, though. The keyboard itself doesn’t have a scratch on it, and functions perfectly well in spite of the shipping adventure it suffered. And rightly it should — the case is a single piece of aluminium alloy and the whole thing weighs just over two pounds (965g). This is clearly a tank of a keeb. It’s not going to flex when you pound the keys, and it won’t move around on the desk, either.

Getting the Lay of the Land 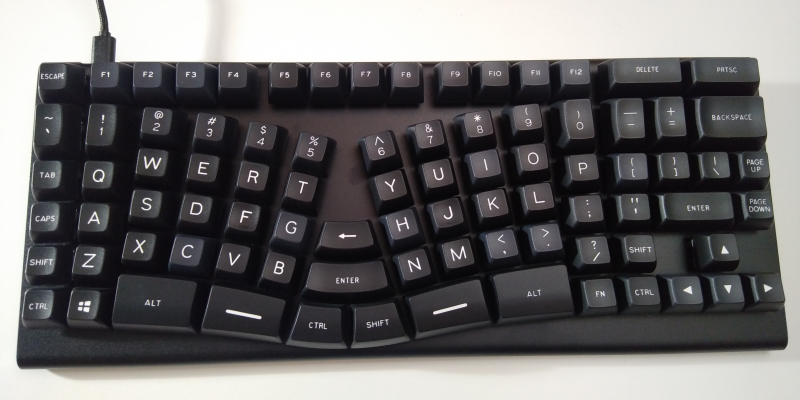 The first thing that caught my eye after feeling out the build quality was the keycaps and their gorgeous, retro legends. The website says they are customized spherical OEM, and that the material is double-shot ABS. My favorite part has to be the homing bumps. I’ve only ever seen straight lines and small dots, but these are curved like eyelashes.

Interestingly, the keyboard itself has no branding whatsoever. The only things that say X-Bows on them are the box, the carrying case, and the keycap puller. It seems as though they want the the layout to speak for itself. You may not notice at first that the layout is ortholinear — the keys are vertically aligned instead of being staggered like a brick wall. X-Bows calls it a butterfly layout, and I can see why.

A few of the layout choices strike me as pretty strange, like the giant Backspace and the 2u Print Screen key. I also don’t understand why the Delete key needs to be 2u wide. X-Bows says that some of the design decisions are there to help noobs get used to using their thumbs for more than just the space bar, so there’s a total of three Shifts and three Ctrl keys. But that’s a problem waiting to happen. What do you do with the normie Shifts and Ctrls once you’re used to using the thumb cluster keys? The only thing you can do: reprogram them for more useful things.

A few things stood out to me right away once I started typing on it, like the fact that Home and End are non-existent. That’s unacceptable to me, and if I were to use this keyboard regularly, I would remap one of the extra Shift/Ctrl pairs. The layout can be changed through the X-Bows software, but so far, it only works on Windows.

Also, I really don’t like the thumb cluster layout. It’s true that I’m used to the Kinesis thumb clusters, but this map doesn’t seem practical to me. My biggest gripe is with the group in the middle — using my thumb to hit Backspace and Enter requires either ugly and uncomfortable wrist movement, or curling up my fingers and pushing them forward so my thumb can reach. I think that swapping Backspace and Enter with Control and Shift 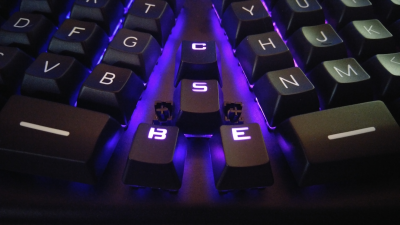 would be perfect, because then they would be a short thumb extension away from the two space bars.

But then you have a bit of a keycaps problem because so many of them are custom shaped. I rearranged the thumb cluster the way I wanted it and relabeled it with caps from that Bezos Barn keeb just to confirm how much easier typing is with Backspace and Enter on the bottom. It doesn’t even look half bad that way, except for the exposed stabilizer.

I used this keyboard for as long as I could on a few separate occasions to really get a good feel for it. I’ll be honest: none of the trials lasted very long before I started to feel that tingling that says I should stop if I don’t want to wear compression sleeves for the next week or two. Some of the keys are just a little too far apart for my hands to be comfortable typing on this all day.

Of course, your mileage may vary. I have pretty darn small hands and history of repetitive stress injury issues. In other words, I’m too far gone for this lovely keyboard, but I definitely see the value for someone who is looking to ease into ergonomic keebs instead of diving right into key wells, QMK, and jelly wrist rests. The gentle split isn’t that different from a Microsoft Natural. Depending on your typing habits, you might ease right into the non-staggered layout without making errors. 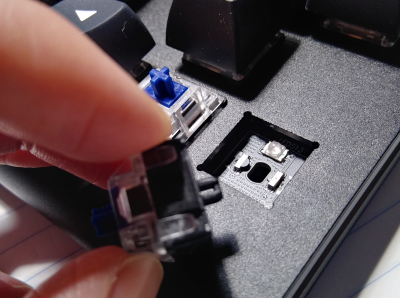 X-Bows was kind enough to let me choose my switches, so I asked for blues. They use Gateron optical switches exclusively, which are inherently hot-swappable — instead of two contacts closing inside the switch, the spring-assisted plunger breaks a tiny IR beam being launched across a hole in the PCB.

These particular switches have metal contacts inside, and I imagine it was just easier to take the Cherry MX form factor, cut the pins off the contacts, and hollow out the slider housing. The only other tried and true way (that I’ve seen) to generate a clicky tactile feeling is with a click bar — a spring-loaded bar that gets plucked on the downstroke by a little nub on the slider.

Optical switches sound pretty darn futuristic, and they are, but they don’t escape being mechanical. There’s still a spring that will wear out eventually, but they are rated to last for more actuations than purely mechanical switches. Our own [Bob Baddely] covered optical switches in great detail not so long ago. I will say that these Gateron blues feel smoother and less brittle than the Outemu blues on the similarly-constructed Bezos Barn keeb.

In case you hadn’t noticed, there’s not a lot to the chassis here. It’s a single piece of aluminium alloy with two side pieces that are attached with tiny Torx screws. The trickiest part of opening this keeb was finding the right tool with which to knock out one of the side panels from the inside. Turns out it’s a butter knife.

The warranty says something about breaking the seal. I’m not worried about getting some unwarranted refund, but I don’t want to just break this keeb. Now that I’ve opened it, I can tell you there’s no glue or anything. Once I removed the panel, the PCB just slid out. It’s anchored to a plastic tray with eight Phillips screws, and the tray has a pair of magnets on the back to secure it to the case.

The micro is around back, and it’s nothing I’ve heard of before — a Weltrend WT59F164. It seems to be a general purpose 32-bit µC with RISC architecture that does USB natively. There are also three SM16136S LED drivers, and another IC near the Weltrend that I could barely read with my magnifying glasses, I didn’t find search hits for any combination of guesses. I would guess I/O expander, but it only has eight legs. Lastly, there is another unpopulated IC pad near the microcontroller that I’m guessing handles the detachable 10-key on the top shelf model.

Putting It Back Together

I definitely get what X-Bows are going for here, and I think they succeeded in most ways. Everybody has different needs when it comes to keyboards, especially once all of their keyboarding starts to catch up to them. This is definitely going to cover it for plenty of people, although they might grow out of the software quickly and wish for something more powerful like QMK.

The X-Bows is a baby step towards full ergo, like what you might try if a Microsoft Natural isn’t cutting it, but you’re not ready to go crazy. It’s a great effort, and I hope it inspires more and more ergo-mechanical designs until there’s one that works for everybody.