Perhaps the biggest change for Android 11 is the fact that more people will actually get it on day one. In the past you’ve always had to have a Pixel or Nexus device to get a fresh build of Android on release, and even then, it was often a staged roll out. But this time around, not only are all the Pixel devices getting it immediately, but so will phones from other manufactures. Well, some of them anyway.

Google says that in addition to their own phones, Android 11 will begin popping up as an update for select OnePlus, Xiaomi, OPPO and realme phones. Obviously there are some very big names missing from that short list of partnered companies, but at least it’s a start. While in general a good thing for the larger Android community, it’s worth noting that this is actually taking something away from the Pixel’s list of elusive features. Combined with the surprisingly low price of the recent Pixel 4a, this could be a sign that Google’s losing interest in trying to develop their own “flagship” phone and would rather focus on pushing the Android ecosystem forward.

Android has always been ahead of the curve in terms of how applications were granted permissions, with even the earliest versions of the operating system indicating what parts of your device each app was designed to interact with. Later, Google added the ability to selectively revoke these permissions after the software was installed. So if you decided down the line that a particular program had no business checking your location or turning on your microphone, you could turn access to those systems off.

In Android 11, Google has taken that concept even farther. Now you can chose to grant permissions to an application on a one-time basis instead of permanently. This will be especially useful for software that you might only use once or twice, such as the configuration tool that each new piece of smart home gadgetry invariably requires you to download to complete the initial setup.

What’s more, application permissions will now expire if you haven’t used the application in awhile. Google isn’t clear on how long it actually takes, but eventually the OS will reset all the permissions for an application that hasn’t been started recently.

The next time you open the application, it will ask you to confirm the permissions it requires as if it had just been installed. On the whole, this will help reduce the attack surface of your device, meaning that only your most commonly used (and presumably, most trusted) applications will have active permissions at any given time.

Speaking of those per-device applications that have regrettably become the norm with smart home products, Android 11 attempts to improve the situation somewhat by automatically collecting all the smart gadgets detected on the network and putting their controls on a single screen. When pressing the power button, you’re now greeted with a configurable array of the smart home products that Android has sniffed out. With just a tap on this screen, you can turn things on and off without having to dive into each gadget’s respective applications.

Naturally, there are some caveats. You’ll still need to complete the initial setup of new products with their manufacturer-supplied applications, perhaps making use of that one-time permission feature, and of course the devices need to be supported by Google’s own ecosystem for them to show up. 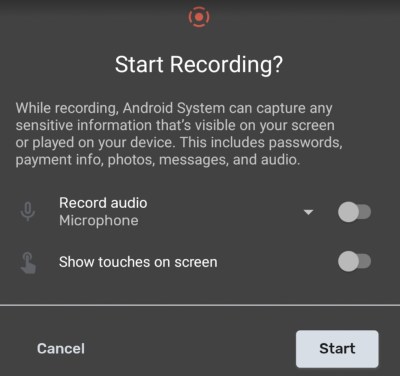 This one might not seem like a big deal at first glance, especially since there’s already been plenty of screen recording applications available for Android. But now the feature is baked right into the OS without the need to download anything separately.

Both your device’s audio and video can be recorded with a tap of the “Screen Record” icon in the quick settings menu. There’s even an option that will toggle visible screen touches, so that viewers seeing the video will know where you were tapping.

With more and more projects including a mobile phone component, this feature could be a boon for documentation. If you’re using an Android application or even a mobile-targeted website as part of your project, the native screen recording capability and tap visualization will let you easily produce step-by-step instructions and walk-through videos without having to resort to some ad-ridden app from the Play Store.

Videos created with the built-in screen recorder are dropped in the “Movies” directory of your device’s storage partition, and according to ffmpeg are encoded as exceptionally high bitrate (~27,000 kbps) H264.

As we covered in the past, Google has been working behind the scenes to push a new contact tracing API into the majority of Android devices in response to the COVID-19 pandemic. In Android 10 and below this was silently distributed through a Google Play Services update, and required your device’s Location service to be enabled. But on Android 11, things are a little different.

The Exposure Notification API is now fully integrated into the OS and is ready to go as soon as the device boots up. Further, Google says they have tweaked how the API works so that it no longer allows apps to request your Location data. In turn, that means it doesn’t require the Location service to be enabled. On the positive side, it makes good on the privacy promises of the API framework. Undoubtedly some will see this as a negative, as it makes selectively disabling contact tracing more difficult.

While there’s still plenty of debate about how effective these systems are, it seems Google isn’t giving up the fight.

While there might not be any huge changes to the OS in Android 11, it does have enough little tweaks that seem like they add up to a solid update. Of course it’s too soon to see what the downsides are, as it will take a week or so before any particularly egregious bugs bubble their way to the surface. In that case, perhaps being in the second or third wave of users to get the latest update isn’t such a bad thing.

At this point, we’re all pretty much stuck with Android. The only serious alternative is iOS, and we won’t even get into why that system is at odds with the hacker ethos. While we’d all like to see a fully free and open source mobile operating system (Linux based or otherwise), the reality is that there just aren’t any serious contenders on the horizon. As impressive as projects like postmarketOS are, nobody is under the delusion that they are going to eat up any appreciable market share.

So if we’ve got to live with Android for the foreseeable future, let’s at least hope Google stays the course and produces more updates like this one. It might not be perfect, but it’s getting better.