3D printers are amazing things, but if one judges solely by the successes that get showcased online, it can look as through anything at all is possible. Yet in many ways, 3D printers are actually quite limited. Because success looks easy and no one showcases failure, people can end up with lopsided ideas of what is realistic. This isn’t surprising; behind every shining 3D print that pushes the boundaries of the technology, there are misprints and test pieces piled just out of sight.

If you have ever considered getting into 3D printing, or are wondering what kinds of expectations are realistic, read on because I am going to explain where objects come from, and how to recognize whether something is a good (or bad) fit for 3D printing. The important thing to understand is that printers have limitations, and to get a working idea of what those limitations are. The result will be a better understanding of what they can do, and what problems they can reliably solve.

I recently had a talk with someone who wanted to know if a 3D printer could help with a problem they had. As I listened to them describe their needs, I realized I had in a way heard it all before many times.

My colleague actually had a fairly good idea of what printers could do, in theory. But they had very little grasp of what printers did not do, and that disconnect left them a bit adrift when it came to practical applications. To help address this gap, here are some tips that can give anyone a working understanding of the things 3D printers do not do well.

They Do Not Create Objects Effortlessly

Repairing household items is a common use case, but 3D printers do not work like photocopiers for objects, nor do they magic up replacements for missing or broken things. There is currently no practical way to take a few pictures of a broken part and have someone print a new one, nor is there a quick and easy way to make copies of existing objects.

Ideally, if someone required a replacement part to repair a household item, the process would begin with looking the part up online by manufacturer and model number. Then a user would download a 3D model of the missing or broken part, and print a replacement at the press of a button. We’re not there yet. There are plenty of 3D models available online, but we are far from having libraries of user-serviceable parts for manufactured products readily available for download and printing.

3D printers can only create objects from 3D models, and 3D models get made by someone using a CAD program. Creating a 3D model needs to happen first, because without a model a 3D printer is useless.

If an object doesn’t already exist as a 3D model, one must be created. Fortunately, the internet is already home to a staggering number of models for useful gadgets, tools, and knickknacks, ready to be downloaded from places like Thingiverse, PrusaPrinters, MyMiniFactory, and others. These models already exist and are — for the most part — ready to be 3D printed.

However, if one needs an object to interface with something else (for example, a replacement part for an appliance) then a 3D model for that object most likely does not already exist. It will need to be carefully designed from scratch, and reverse-engineering of a mechanical design is a process that will involve a lot of careful measuring and testing in addition to the CAD work. Access to both the thing being fixed, as well as the broken part being replaced, will probably be needed. The job could be anywhere between an afternoon’s work, to a multi-day effort.

3D scanning techniques, like photogrammetry, can be useful, but scanning is only a tool to aid other design work; it doesn’t yet remove the need to choose a CAD package and start designing. A good example of how 3D scanning can assist the design process is showcased nicely by this project to 3D print a custom control panel to fit onto a complex shape.

Some Things Do Not 3D Print Well 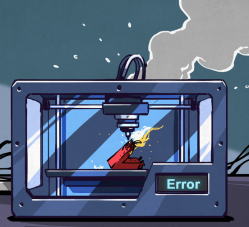 To print reliably, a 3D model must be designed with a 3D printer’s strengths and weaknesses in mind. One must always play to a tool’s strengths, and 3D printers are no different. Just as a table saw is the wrong tool for cutting curves, so too are some shapes and part geometries not easily 3D printed.

The two types of 3D printing that are most accessible to hobbyists are filament-based (FDM) and resin-based (SLA). Both work by building an object layer by layer, starting from a flat build platform, with each new layer being laid upon the foundation of the one before it. Because of this, some things print more easily and reliably than others.

How can one know whether an object will be troublesome to 3D print without having a lot of experience? Below is a simple checklist of potentially troublesome features. The more items in this list an object matches, the more likely the object will have challenges.

For people who work with their hands, here is an evaluation method that is as intuitive as it is simple: Would the object be easy to build out of wet sand, as if one were building a sandcastle? If so, then it will probably 3D print just fine.

3D Printers Are Great, So Long As You Play By Their Rules

3D printers do not run flawlessly every time, nor do they operate in a foolproof manner. Operating and maintaining a 3D printer is not difficult, but it is a skill acquired through experience. It is entirely possible to damage a printer by running it carelessly. Ideally, one would simply press a button then sip a margarita until the machine spits out a perfectly-finished part. Unfortunately, this isn’t true of 3D printers any more than it is for any other power tool.

To be clear, 3D printing is one of the best things to have happened to hobbyists over the last decade, and the benefits are not limited to those who design objects from scratch. For example, printing miniatures for tabletop gaming is a niche that has probably single-handedly propelled hobbyist SLA printing to where it is today. As a result, hackers around the world have reaped the benefits, making it easier than ever to add an SLA printer to the workbench.

Successes are great, but knowing what 3D printers are not good at is also important. With a better idea of what printers do poorly, a thoughtful hacker is not only in a much better position to decide whether buying a 3D printer is a good idea, but will also have a better idea of how many beers that friendly printing favor might be worth.

56 thoughts on “3D Printering: The Things Printers Don’t Do”