We had a comment recently from a nasty little troll (gasp! on the Internet!). The claim was that most makers are really just “copiers” because they’re not doing original work, whatever that would mean, but instead just re-making projects that other people have already done. People who print other peoples’ 3D models, or use other peoples’ hardware or software modules are necessarily not being creative. Debunking a cheap troll isn’t enough because, on deeper reflection, I’m guilty of the same generic sentiment; that feeling that copying other people’s work isn’t as worthy as making your own. And I think that’s wrong!

In the 3D printing world in particular, I’m guilty of dismissively classifying projects as “Yoda Heads”. About ten years ago, [chylld] uploaded a clean, high-res model of Yoda to Thingiverse, and everyone printed it out. Heck, my wife still has hers on her desk; and alone this is proof that straight-up copying has worth, because it made a sweet little gift. After a while, Yoda gave way to Baby Groots, and strangely enough we’re back to Yoda again, but it’s Baby Yoda now. 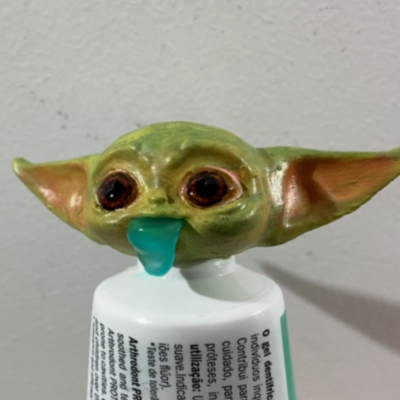 Does filling the world with more Yoda Heads, vomiting toothpaste or not, further creativity? I’d argue it does. It’s actually a moderately difficult print — those spindly little ears present an overhang challenge that’ll definitely help you calibrate your cooling, or force you to learn something about supports. Pushing your limits in 3D printing teaches you about the tool and what possibilities it presents. Mastering a tool is an important step toward using it creatively. And then there’s “riffing”.

Jazz musicians don’t just get up and play improvisational solos that come magically into their heads. They’ve spent hours in the shed, copying the ways that other players have interpreted the classics. Which is to say, they become creative through copying. Transcendental, inspirational, original moments come about through hours and hours of filtering other peoples’ work through your fingers, ears, and lips until it becomes a part of you and eventually bubbles up through your musical sensibility.

The same goes for any “derivative” project. We just covered a tuning-fork-based clock that was a remake of a previous incarnation, but in the process of re-making, it morphed a little bit into something more aesthetically post-apocalyptic. We’ve seen possibly a million word clock builds, but [t0mg]’s version this one is beautifully laser-etched into paint on the back side of glass, and made me think that you could do the same with the coating on the back side of a mirror. Riffing. I could go on for hours.

So maybe it’s not as sexy to re-make someone else’s project, but it can be tremendously valuable. It’s how we learn tools, how we increase our creative vocabulary, and it gives us a chance to explore something cool that someone else has done from the inside out. Copying should be seen as essential skill-building, despite our cultural prejudices against it. Go out and print yourself some Yoda Heads (metaphorically) without shame!