Some of us might remember the Rolodex, a once-popular paper version of today’s contacts databases we all have on our phones and computers. The Rolodex, a portmanteau of “rolling” and “index”, was patented in 1956 by Hildaur L. Neilsen of the Zephyr American Corporation in New York City. The frame of a Rolodex holds specially notched index cards which snap onto two rings, allowing the user to find a desired contact by rotating the whole stack of cards using one of the big wheels on either side. Contact information can be written or typed on blank cards, or special sleeve cards can be used to hold business cards. Despite being featured in museums these days, the Rolodex company is still around and selling both frames and cards; even offering downloadable templates so you can make your own cards at home.

In some professions like sales and journalism, one’s Rolodex is a treasured possession, containing years of accumulated contacts which is literally or figuratively lugged from job to job. With the advent of personal computing, these lists have shifted to electronic form. While putting a contact list on your computer was straightforward and very useful, being able to carry your list around in your pocket was even more so (remember, this was before most people had a cell phone, much less a smart phone). In the 90s several small, electronic Rolodex-like products were introduced, but none became very popular.

As the computer age dawned, companies scrambled to become the replacement for the original Rolodex. Some were just like computers, others more like pocket calculators.

The Franklin Computing company released a pair of Apple II clones in early 1982. You might not be familiar with the Franklin Ace 100 or 1000, but their legal battle with Apple sent ripples throughout the software community that we still feel today. The United States Court of Appeals ruled in 1983 that a computer’s operating system and the associated binary code were both copyrightable. 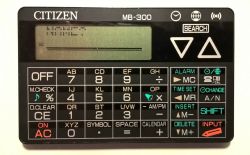 This pushed Franklin’s focus away from computers to hand-held electronic devices such as the Spelling Ace pocket dictionary, the Language Master pocket translator, and the eBookMan. Prior to making the Rex, Franklin also made a few small pocket organizers and had an exclusive license to the Rolodex trademark.

Across the ocean the Japan CBM Corporation, part of Citizen Watch, was making electronic calculators, pocket television receivers in the 1980s. They also had a family of small “Memory Bank” devices. These were credit card sized, but had a limited memory capacity and a small display.

The Rise and Fall of Rex

The Rex was different. It was like a piece of your desktop computer that you could take with you. But most importantly, it was easy to keep it up-to-date.

The story of Rex hinges on a familiar name. Anyone into computer programming at this time has no doubt heard of Philippe Kahn, the inventor of Turbo Pascal and founder/CEO of the software giant Borland. Although he was very publicly ousted out by the board in 1994, he was allowed to take Borland’s Sidekick and Dashboard products with him to his new company, Starfish Software. Starfish focused on synchronization IP and software, and teamed with Franklin and Citizen to introduce a new pocket-sized organizer.

The name Rex is a diminutive of the name Rolodex, quite appropriately as the form factor itself is a physical diminutive of the real thing. Previous electronic Rolodexes sacrificed display size to make room for a barely functional set of input keys. Kahn’s Rex took the opposite approach, forgoing any input method and maximizing the display area. This wasn’t as bad an idea as it might seem, if you concede that the device was going to be used just for reference and would be updated from your computer. And while the form-factor was (and still is) certainly eye-catching, from Kahn’s perspective, his new synchronization technology TrueSync was the real star of the show.

The one-way transfer of data from your PC to a small organizer might seem simplistic, but that was just a small subset of TrueSync. It was created to provide wired and wireless data synchronization between your devices, a task which required not only solving the technical issues but taming the Tower of Babel represented by the many different and incompatible data exchange formats of the day. TrueSync spawned SyncML and an industry group which standardized the exchange of data and device management.

Not surprisingly, the catchy design and size of the Rex made a big splash when it was introduced in 1997. The Rex-3 had a whopping 256 kB of storage (there was a very short-lived Rex-1 with only 64 kB, so elusive that collectors aren’t even sure it was ever sold on the market). But only a year later, things began to unravel. Starfish was sold to Motorola and Franklin reported a devastating loss for which they blamed the Rex. The whole business was sold to Xircom in 1999, and they in-turn sold it to Intel the following year. Intel finally killed the product in 2001.

A few iterations of the design and model names happened during all this reshuffling of owners. The Rex Pro/Rex-5000 model was introduced in 1998 which added a modest input ability, and doubled the memory to 512 kB, and had a faster processor. A version was even made which snapped on to a Motorola StarTEC flip phone. Xircom did a complete overhaul, releasing the Rex-6000 in 2000. They kept the form-factor, but replaced the guts with a Citizen DataSlim-2. This was a surprisingly capable and extensible PDA, with a well-established community of Japanese developers. But it was too late — consumers had turned their attention to easier-to-use Palm Pilots.

When I got my hands on a Rex and I couldn’t stop thinking about interfacing it directly with the HP200LX that I featured in a recent article because it has it’s own PCMCIA slot. While it could sync over RS-232.

Alas, the interface specs were not available for either interface. Just as I was about to give up, I discovered a group of people in Germany who were investigating the Rex format. I decided that I would build upon their efforts and make a program to sync the HP-200LX personal organizer data to the Rex3. 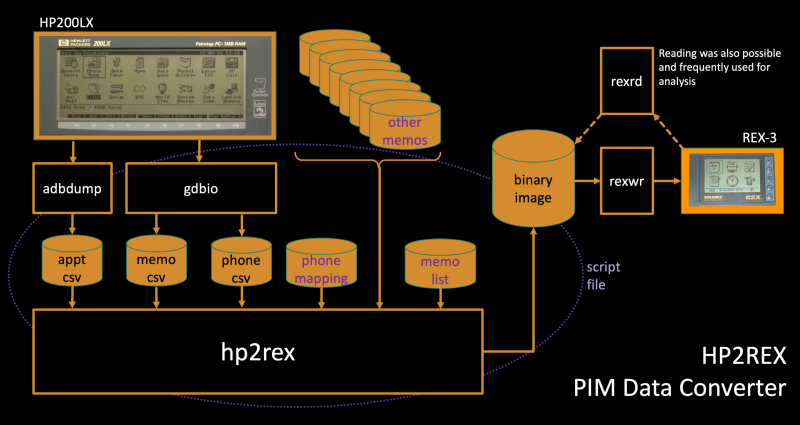 There were two layers of obfuscation to contend with. The memory of the Rex consisted of a number of 1K memory blocks. A contiguous flat memory space was made up of a number of these blocks which were in a big, doubly-linked list. Adding to the fun, all blocks weren’t necessarily full. This was done no doubt to make the job of inserting and deleting data fast, without having to shuffle around blocks of memory needlessly.

Once you grasped the lower layer, there were others formats to tackle, one for each kind of data — phone contacts, calendar appointments, memos, to-do lists, time zones, and preferences. Each kind of data resided in different sections of this flat memory space. I spent months decoding these formats in order to fill out the missing fields from the German group’s efforts. I still recall that decoding the different kinds of repeating appointments gave me not only headaches but an appreciation of the complicated logic involved in what would seem to be a simple thing.

I supposed one could have written a single do-it-all app, but instead I took the piecemeal approach. Unlike the Rex, the PIM formats on the HP200LX were not secret. Several tools already existed to import/export the native format from/to CSV files. I enlisted the help of fellow HP Palmtop developer Mack Baggette to write the PCMCIA interface code for me, since he already had experience talking to that port. My program HP2REX utilized these tools to perform the transfer of PIM data from the HP200LX and to the Rex, so it only focused on the translation algorithms. It was bundled inside an example script file to give the convenience of a single-command operation. In everyday use, there was really no synchronization going on, since the Rex3 didn’t have editing abilities. Every time you synced to the Rex, I basically blew away the contents and wrote a fresh copy. But reading data from the Rex was possible, indeed essential, for cracking the formats.

The latest release from 2001 is posted on Github for the curious.

Where Are They Now? 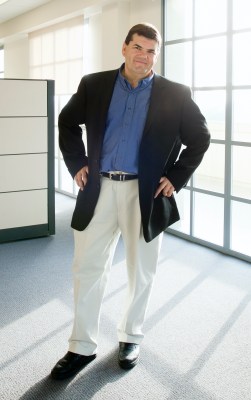 The Rolodex company is still around and still selling the famous index frames and paper cards. After a merger and relocation to Hong Kong, the newly-named Franklin Electronic Publishers company manufactures small pocket-sized reference devices to this day. Citizen still makes calculators, and their discontinued Dataslim-2 PDA still has a niche following.

Philippe Kahn is perhaps the most interesting member of the Rex team. The subsequent purchase of Starfish/TrueSync by Motorola suggests he correctly foresaw data synchronization as the real problem, not the hardware. But even before grass began growing on the Rex’s grave, Kahn was off on another invention spree. He is credited with the sending the first cell phone snapshot of his daughter’s birth from the maternity room to 2000+ friends (check out the re-enactment video at the end of that Spectrum article). Time magazine selected this photo for their The Most Influential Images of All Time collection.

His fascination with sending photos by phone led to the start of LightSurf in 1998, a multimedia messaging solutions provider. Ever restless, in 2005 Kahn created yet a fourth company, Fullpower Technologies, which focuses on sensors and IoT. He seems to have finally settled down, having stayed with Fullpower until the present day.

As for the Rex? Well, except in the hands of a few collectors and the curious, I’d have to say the Rex is dead. But if you think about it, all the core aspects of the Rex, except for its tiny size, live on in today’s smartphones. If you ever used one of these credit-card sized devices, share your story in the comments below.

27 thoughts on “Rex Wasn’t Really A PDA, It Was The First Great Digital Rolodex”