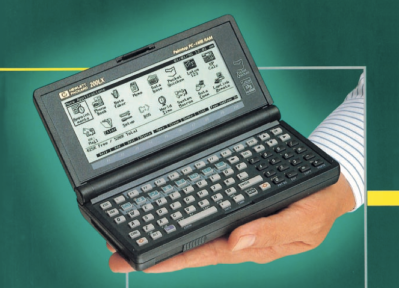 Introducing the HP-200LX, the first real palmtop computer. I used one of these daily up until the mid-2000s, and still have an operational one in my desk drawer. Let’s step back in time and see how this powerful pocket computer began its life.

Today, carrying around several hundred thousand MIPS, massive data storage, dazzling color displays, and multiple forms of wired and wireless connectivity in the palm of our hands is taken for granted. (The thing even has a telephone.) But obviously, it hasn’t always been so.

The Hewlett Packard company began as a manufacturer of quality test instruments, a tradition that continues to the present day despite two corporate and brand name changes: becoming Agilent in 1999 and Keysight in 2013. But HP also developed a computer division in the 1960s, producing several families of computers, such as the HP-2100, that naturally complemented their laboratory test equipment. 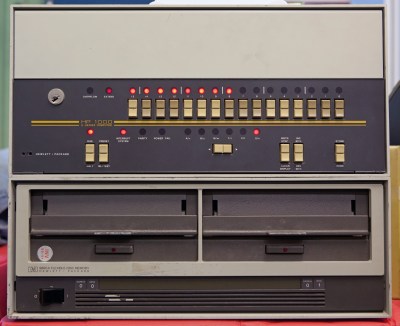 Almost from the get go, HP became known for pushing the envelope, or shall we say box, when it came to the size of their computing products. A fortuitous introduction led to the development of HP’s first desktop calculator, which was no bigger than a typewriter of the day.

Tom Osborne was a frustrated engineer, whose calculator design had been rejected by over 30 companies, including HP, when a former coworker put him in touch with someone at HP. Tom met with the HP team, and they immediateley engaged him to help build the a desktop computer with the goal of fitting into Bill Hewlett’s desk typewriter drawer. Called a calculator because it was so small that no one would believe it was a computer, the HP-9100 met the size requirement after a little late-night secret desk carpentry. When it was all said and done, the product was an unqualified success exceeding all expectations.

After the 9100 was introduced, Bill Hewlett proposed that the next machine should be a tenth the cost, a tenth the size, and be ten times faster; eventually suggesting it should fit in his shirt pocket. It took more than happenstance to meet this new challenge, which was only possible after the introduction of reliable MOS LSI integrated ciruits. In fact, it was four more years before the HP-35 was released in 1972. Another bit success, it became the forerunner of a long line of RPN calculators used by a whole generation of scientists and engineers — many still in use today.

HP took miniaturization to another level in 1977 with the introduction of the HP-01 wrist calculator and watch. Interestingly, this was the first HP calculator that wasn’t RPN. 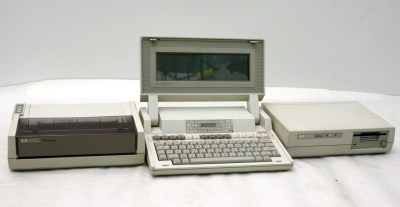 The computer side of HP wasn’t just twiddling their thumbs, either. A series of smaller and smaller computers were introduced throughout the 1980s, beginning with the HP-80 through to the HP-85. Notable small form-factor models included the HP-71 and the HP-75.

HP introduced the HP-110 portable computer in 1984, which included MS-DOS and Lotus 123 built into ROM. With this background of continually developing smaller and more feature-rich computers, it’s not surprising that HP made the next big leap, paving the way for me to pull a computer out of my coat pocket in that airport concourse. 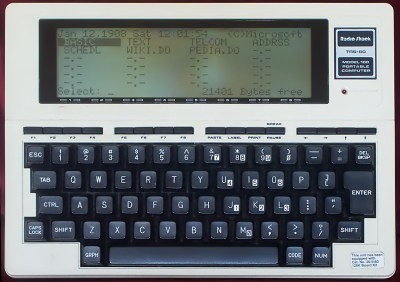 It’s not like other computer and calculator companies were sitting idle during this time. Looking back at pocket-sized computers of the era, there were many different offerings of varying abilities. Radio Shack had several pocket computers which ran Basic: the PC1 in 1980 and the PC2 in 1981, both re-branded Sharp computers from Japan. They packed an impressive amount of power into such a small package. In fact, I used a PC2 for several years when I first graduated from university, and took full advantage of the four-color pen plotter to print antenna patterns for work.

Radio Shack’s TRS-80 Model 100 family of portable laptop computers, based on a Japanese Kyocera model, was introduced in 1983 and was very popular with journalists and folks who needed to write on-the-go. While these were more or less general purpose computers, other companies were developing a new type of pocket computer which would eventually become known as PDAs, or Pocket Digital Assistants. Atari’s Portfolio in 1989 and the Psion Organizer launched in 1986 are good examples of these.

A Palmtop is Born

Considering the state of the market then, it’s not surprising that HP started looking to design a handheld computer / PDA. The concept morphed into a study project called Chetah in 1988, and then into a formal research program in early 1989. It initially was to be based on the HP-19 calculator which opened vertically, like a book. After several iterations, the project name changed to Jaguar, preliminary specs were decided upon, and packaging changed to be a clamshell-style. But ultimately the project did not get the green-light from management and was suspended in Aug 1989. But not for long…

In another fortuitous meeting for HP, the Lotus Development Corporation in Cambridge MA contacted them with a proposal to team up again and develop a pocket Lotus 1-2-3 machine. A series of meetings followed, and the two companies agreed to cooperate on a joint project. This project was destined to become the HP-95LX, the first palmtop computer. The team represented a perfect match of skills and technology, and the development of the final palmtop design was kicked off.

The final specs resulted in an MS-DOS computer running Lotus 1-2-3 and a complete suite of PDA tools from ROM. The 95LX was introduced in 1991, quickly followed by the 100LX and 200LX in 1993 and 1994, respectively. By this time, the 200LX boasted a full 80 x 25 column CGA display, PCMCIA (People Cannot Memorize Computer Industry Acronyms) card slot, serial and IR ports, and a full keyboard with numeric keys. It was truly a palmtop computer, capable of being a PDA, a fully functioning computer, or both. And it could run for weeks on two standard AA batteries. Another home run for HP.

What Made it so Special?

The 200LX, due to its size and portability alone, opened up whole new niche areas to computerization. Therefore it is hard to single out one reason for its success and popularity. But here are a few aspects of the palmtop that still resonate with me, based on my usage of the machine for about ten years and several circumnavigations of the globe.

HP calculators were famous for having keys with that perfect look and feel, and the palmtop family was no exception. Judging any keyboard is a highly subjective matter, especially one that’s pocket-sized. Unless you have very tiny hands, there’s no way to comfortably touch type on any palmtop keyboard. The majority of folks would type on these using the thumb method, and for that the HP keys worked perfectly. 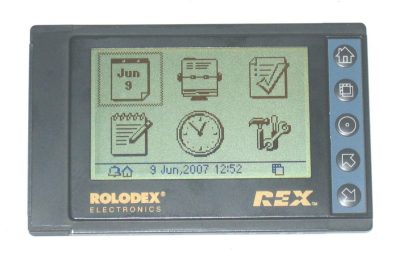 Having a PCMCIA slot meant that a wide assortment of accessories could be used with the palmtop. It was very common to use Flash cards, later on Compact Flash cards with an adaptor, providing hundreds of megabytes of storage (which was quite decent for a DOS system). Phone modems and FAX cards, ethernet adaptors, and even a mobile phone GSM modem were available. And if even the palmtop was too big for your, you could synchronize your PDA data to the REX3 PCMCIA pocket PDA. This was the shareware project I was writing C-code on the airplane trip in the intro.

Besides having access to virtually all DOS programs, a whole cottage industry sprung up around the 200LX, offering all manner of programs tailored to the palmtop. These included internet access, emails, FTP, usenet readers, just to name a few. I often used my palmtop to develop embedded software, and had several C compilers, an assembler, and even a Fortran compiler available. There was Software Carousel for task switching, a plethora of games — you name it, it was probably available for the palmtop.

Even as well designed as it was, the community quickly discovered improvements could be made. Two of the most common hacks were to over clock the microprocessor (x2!) and to increase the internal RAM. There was an ongoing effort to install a backlight and a few units were so modified.

A very active community formed around these machines, initially on Compuserve and AOL. That migrated to a mailing list that still operates today. Various software repositories sprang up, and a print journal called The Palmtop Paper was the main source of information for many users. Several companies made hardware products specifially designed to work with the 200LX.

Armed with a modem or ethernet card, you could access the internet from anywhere around the world. I did that for several years, using local dialup numbers for SprintNet or Tymenet you’d find in the paper phone book in order to telnet into my ISP and get emails. I’ve connected to the internet on the 200LX from pay phones using an acoustic modem, hotels in Asia and Europe, and of course an airport concourse.

There were quite a few variations of this palmtop family, the HP Omnigo, the HP-1000CX, and the HP-700LX, the latter being a regular 200LX with a cradle to hold a Nokia cell phone. But HP eventually moved on to embrace WinCE, a choice that may have been popular among PDA users, but was seen as a big step backwards by most in the community. These were models in the HP-300LX family, and later the HP-620LX family. 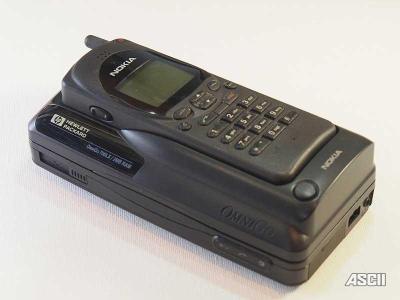 It’s said that all good things must come to an end, and the HP family of palmtops is no exception. By 1999, HP announced they would halt all palmtop production. Many users hung on to their palmtops for several more years, but the majority eventually moved on, begrudgingly. The hardware, while robust, did have a few weak points as it was simply not designed to last 15 or 20 years.

And while the connectivity offered by the palmtop was ahead of its time in the 1990s, in this century it is painfully inadequate. There have been a few new-and-better palmtop projects, some more successful than others, but so far, all have failed to hit that sweet spot.

The HP-200LX was a breakthrough product which came along at the just right point on the technology time line. Back in the 1990s, it was unimaginable that you could have a complete computer in your pocket, but the HP / Lotus team really nailed it. In addition to being a fully functional DOS computer, they included an impressive suite of PIM tools, not to mention Lotus 123, Quicken, PCMCIA card expandability, and unprecedented connectivity.

I hope you enjoyed this trip down the memory lane of palmtop computing, and let us know in the comments if you ever used one of these.

128 thoughts on “The First Real Palmtop”