It’s difficult to tell with our dull human senses, but everything around us is vibrating. Sure it takes more energy to get big objects like bridges and houses humming compared to a telephone pole or mailbox, but make no mistake, they’ve all got a little buzz going on. With their new automated laser, the team behind VibroSight++ believes they can exploit this fact to make city-scale sensing far cheaper and easier than ever before.

The key to the system is a turret mounted Class 3B infrared laser and photodetector that can systematically scan for and identity reflective surfaces within visual range. Now you might think that such a setup wouldn’t get much of a signal from the urban landscape, but as it so happens, the average city block is packed with retroreflectors. From street signs to road studs and license plates, the team estimates dense urban areas have approximately 7,000 reflectors per square kilometer. On top of those existing data points, additional reflectors could easily be added to particularly interesting devices that city planners might want to monitor. 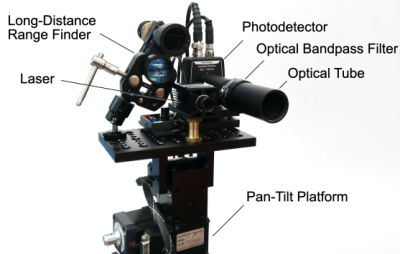 Once VibroSight++ has identified its targets, the next step is to bounce the laser off of them and detect the minute perturbations in the returned signal caused by vibrations in the reflector. In the video below you can see how this basic concept could be put to practical use in the field, from counting how many cars pass over a certain stretch of road to seeing how popular a specific mailbox is. There’s a whole world of information out there just waiting to be collected, all without having to install anything more exotic than the occasional piece of reflective tape.

If this technology seems oddly familiar, it’s probably because we covered the team’s earlier work that focused (no pun intended) on using reflected laser beams for home automation in 2018. Back then they were aiming a much smaller laser at blenders and refrigerators instead of license plates and street signs, but the concept is otherwise the same. While we’ll admit the technology does give off a distinctive Orwellian vibe, it’s hard not to be intrigued by the “Big Data” possibilities afforded by the team’s upgraded hardware and software.

31 thoughts on “With A Big Enough Laser, The World Is Your Sensor”