Back in the late 80s, our company managed to procure the complete 28 volume MIT Radiation Laboratory (Rad Lab) series, published in 1947, for the company library. To me, these books were interesting because I like history and old technology, but I didn’t understand why everyone was so excited about the acquisition. Only a cursory glimpse at the volumes would reveal that the “circuits” these books described used vacuum tubes and their “computers” were made from mechanical linkages. This was the 1980s, and we worked with modern radar and communications systems using semiconductors, integrated circuits, and digital computers. How could these old musty books possibly be of any practical use? To my surprise, it turned out that indeed they could, and eventually I came to appreciate the excitement. I even used several of them myself over the years.

In the years leading up to WW2, the idea of a civilian organization of scientists that would operate independently of the military and government bureaucracies was being championed by Dr. Vannevar Bush. The military and scientists had not worked well together during the first World War, and it looked like science and technology would be playing a much bigger role in the future.

It seemed certain that America would enter the conflict eventually, and Dr Bush and others believed that a new organizational framework was called for. To that end, the National Defense Research Committee (NDRC), which later became the Office of Scientific Research and Development (OSRD) was pitched to President Roosevelt and he approved it in June of 1940. 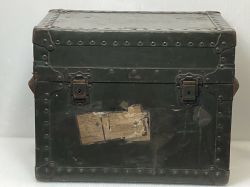 Almost immediately, a gift fell in the lap of the new organization — the Tizard Mission which arrived in the states from the UK in Sep 1940. They brought a literal treasure chest of technical innovations from the British, who hoped that US industry’s cooperation could help them survive what looked like certain and imminent invasion. One of those treasures was the cavity magnetron, which our own Dan Maloney wrote about a few years ago.

Within a few weeks, under the guidance of young Welshman “Taffy” Bowen, they had reviewed the design and gathered up the necessary equipment to fire it up. A 10 kV anode power supply and a 1,500 gauss electromagnet were procured, and the scientists gathered at the Bell Radio Laboratories in Whippany New Jersey on Sunday, Oct. 6, 1940. They powered up the cavity magnetron and were blown away by the results — over 10 kW of RF at 3 GHz (10 cm) from something the size of a bar of soap.

A flurry of activity ensued, and the Radiation Laboratory was formally established on Oct. 25, located at MIT and operating under the umbrella of the NDRC. The name was going to be Microwave Laboratory, but it was changed to Radiation Laboratory instead to mislead any prying eyes as to the focus of their research. At this time, radiation research labs, like Nobel Prize recipient Ernest Lawrence’s Berkeley Radiation Laboratory, were purely scientific in scope without wartime importance.

The Push to Lower Wavelengths

Why all the fuss? Although radar systems were in limited use by this time, they all operated in the VHF band. Engineers of the day were familiar with the VHF frequency band and therefore had the design tools and necessary components to build working units. In the late 1930s the British had built an extensive line of coastal defense radar stations called Chain Home, whose operation straddled HF and VHF. Since the war started in Sep 1939, some weaknesses in the system had come to light. The Chain Home Low system at 200 MHz addressed some of these concerns, but the shorter wavelengths of centimetric radar (in the SHF region) promised some real advantages. For example, antennas could be smaller, smaller objects could be detected and located with better accuracy. But there had been no way to generate the necessary transmitter power until the introduction of the cavity magnetron.

Along with the cavity magnetron itself, the British presented their American counterparts with a priority list. They needed three types of radar right away: (1) airborne interception, (2) directing anti-aircraft gunfire, and (3) long range bomber navigation. The Rad Lab concurred, and immediately started three corresponding crash programs.

In three months time, the team had their prototype 10 cm airborne radar working. Built in true hacker style, it filled up a whole rooftop and was cobbled together with whatever they could get their hands on. By early January they had a working system with two antennas, and by February they had solved the transmit-receive switch problem and demonstrated successful tracking of aircraft using only “one eye”. By March, they had reduced the sprawling prototype into something that could be installed in an airplane. On its first test flight the crew demonstrated air-to-air detection, and, on a whim, tried and succeeded to detect ships and submarines.

This project got into full swing early in 1941. The original ideas presented by the British, indeed how existing VHF-based systems worked, was entirely manual. Radar would find the planes, but people steered the antennas and fired the guns — basically a really improved searchlight. But Rad Lab scientists thought they could do better by automating the whole process. They proved the naysayers wrong, and by May 1941 had a radar working which could automatically track airplanes and pointed a movie camera at the plane. Bell Labs developed an analog fire control computer, and a working system was completed by Apr 1942 (SCR-584 Radar).

Development of the Long Range Navigation project, or LORAN, began right away. The first pair of stations were under construction by spring. LORAN was the only Rad Lab project not to use microwaves. Instead, it operated around 2 MHz and was used to guide planes and ships. LORAN and its successors continued to be used in the United States until 2010, and in Europe until 2015.

These are only the first three projects. By the end of the war, the Rad Lab had developed and contributed to many other new radar applications as well, including new systems at 3 cm and 1 cm.

The Rad Lab needed people fast, and began recruiting physicist and engineers from universities around the country. By all accounts, it was a great place to work. There was free exchange of ideas, the excitement of pushing new boundaries of engineering and physics. Decades before modems and BBS systems, the internet, or our own weekly Hackaday Chat, Rad Lab staff were having weekly teletype conferences with their colleagues around the world.

The Laboratory never adhered to a rigid organization chart, based on so-called logic or preconceived function; rather the organization was built around the men available. [The policy was to] set the scientists free of non-scientific control. In the last year or two the Laboratory did begin to be more controlled by non-scientific elements. But this came too late to frustrate any important aspects of the program. Rad Lab Founding Director Lee Alvin DuBridge

The ever-present urgency of the war would always weigh upon decisions. Anyone proposing a new idea would always be challenged by associate director I. I. Rabi with the following question: “How many Germans will it kill?”. [Ed Note: Different times!]

One of the temporary structures built to house the sprawling laboratory in 1943 was simply called Building 20 and became a legend unto itself for decades to follow. Being of temporary construction, people didn’t worry about drilling holes in walls to pass cables. It is said that 20% of all American Physicists worked in Building 20 at one time or another, and earned the name “The Magic Incubator”. It was finally torn down in 1998 to make way for a modern academic complex.

An Encyclopedia of Knowledge

When the war over, the Rad Lab closed up shop on Dec 31, 1945. One final task was to document the work done during the five years of operations. Assistant Director Louis Ridenour led the task, getting the scientists to document their work before returning to normal life. The result was a 28 volume set, including the index.

During my years working with radar systems, we routinely used some of these books. It would not be uncommon to hear someone shouting down the hall, “Who stole Silver from my desk last night?” — Samuel Silver was the author of the antenna book, volume 12. I used Marcuvitz’s Waveguide Handbook, volume 10, quite a bit. And when assigned to a project using time-of-flight calculations, I learned a lot from the LORAN book.

In the 2020s, are any of these volumes still important? I’d say the theoretical ones are still valid, but there are probably plenty of other, more modern, texts more easily available. For people into retro circuits, these books have a lot of good example vacuum tube designs to learn from. And if you’re into mechanical computers, the book on computing mechanisms and linkages might be of interest. This series has been long out of print, but they are available from the Internet Archive (link to volume 1).