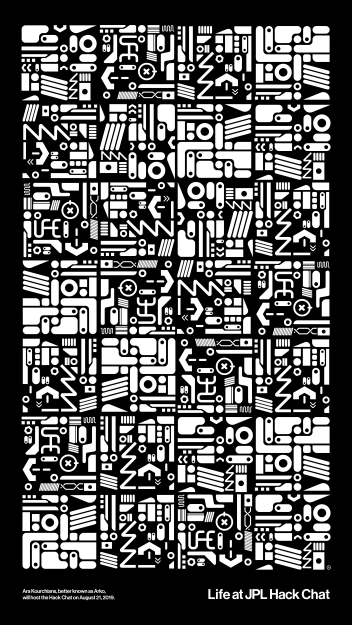 Given JPL’s incredible reputation, it’s perhaps no surprise that many of the questions were about how one gets a job there. Do you need a degree? Does it have to be from a prestigious university? Will you need to get a security clearance? What can a hacker do to get noticed?

For the specifics Arko directs folks to the lab’s Human Resources department, but from his own observations, he says nobody seems overly worried about where you went to school and that hackers are tinkerers are more than welcome. It’s more important to show you have the knowledge and passion they’re looking for, which is why be brought some of his own robots and custom PCBs to his interview.

As you might expect from our community, many users had technical questions about how the lab builds things internally. He explained that for hardware, they maintain a library of trusted components and circuit designs that can be pulled from so engineers aren’t constantly reinventing the wheel every time they need a reliable voltage regulator. Equally important — components in the JPL library are kept in stock.

On the software side, while Arko admitted to being a Rust fan personally, the “official” language used by most projects is C/C++. This is due at least in part to the accumulated knowledge already gained with these languages, with code from past missions often getting folded into their successors. Code is carefully reviewed and must follow JPL’s 10 Rules for Developing Safety-Critical Code, each of which Arko says can be tracked back to a mission failure.

Moving on to some of his favorite projects, Arko talks about the recently completed testing of the Lander Vision System for the Mars 2020 rover. To validate the system that would eventually guide what we today know as the Perseverance lander to the Martian surface, they installed an engineering model of its vision system on a helicopter and flew it over the Death Valley National Park. With the system’s camera and inertial measurement unit (IMU) mounted to a gimbal on the front of the aircraft, they were able to simulate some of the unique dynamics of Martian Entry, Descent and Landing (EDL) such as parachute deployment and movement. He explains that JPL has a philosophy of “Test as you fly. Fly as you test”, and that this elaborate installation allowed them to field test the complete system in the closest thing they could get to actual mission conditions here on Earth.

Arko wrapped up the Chat by talking about his work on the second version of the LLAMA, a quadrupedal robot designed and built in-house by JPL. He says this assignment was particularly exciting as he and the team had the opportunity to really make significant changes to the design. While only a research project and not destined for a trip to the Red Planet, NASA and JPL believe these sort of legged robots have applications on rocky worlds that can’t easily be explored by wheeled or tracked vehicles. In the meantime, the technology can also be used for terrestrial purposes such as rescue operations in disaster situations.

We’ve always believed that the Hack Chat is a valuable opportunity for individuals like Arko to share their fascinating first-hand knowledge and experience with the wider Hackaday community. But Chats like this one are as inspirational as they are informative. They serve as proof that with dedication, you can go from hacking on robots in your spare time to building hardware destined for Mars.