When we go to the cinema and see a film in 2022, it’s very unlikely that what we’re seeing will in fact be a film. Instead of large reels of transparent film fed through a projector, we’ll be watching the output of a high-quality digital projector. The advantages for the cinema industry in terms of easier distribution and consistent quality are obvious. There was a period in the 1990s though when theatres still had film projectors, but digital technology was starting to edge in for the sound. [Nava Whiteford] has found some 35mm trailer film from the 1990s, and analysed the Dolby Digital sound information from it. 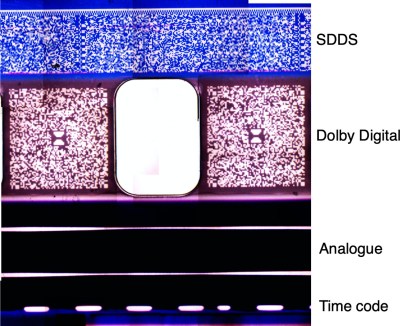 The film is an interesting exercise in backward compatibility, with every part of it outside the picture used to encode information. There is the analogue sound track and two digital formats, but what we’re interested in are the Dolby Digital packets. These are encoded as patterns superficially similar to a QR code in the space between the sprocket holes.

Looking at the patent he found that they were using Reed-Solomon error correction, making it relatively easy to decode. The patent makes for fascinating reading, as it details how the data was read using early-1990s technology with each line being scanned by a linear CCD, before detailing the signal processing steps followed to retrieve the audio data. If you remember your first experience of Dolby cinema sound three decades ago, now you know how the system worked.

The film featured also had an analogue soundtrack, and if you’d like to know how they worked, we’ve got you covered!

24 thoughts on “How Did Dolby Digital Sound Work On Film?”