In the 1970s, 8-track audio players were very popular, especially in cars. For a couple of bucks, you could have the latest album, and you didn’t have to flip the tape in the middle of a drive like you did with a cassette. We’ve seen plenty of 8-tracks and most of us a certain age have even owned a few players. But we couldn’t find anyone who would admit to owning the Bearcat 8 Track Scanner, as seen in the 1979 Popular Electronics ad below. 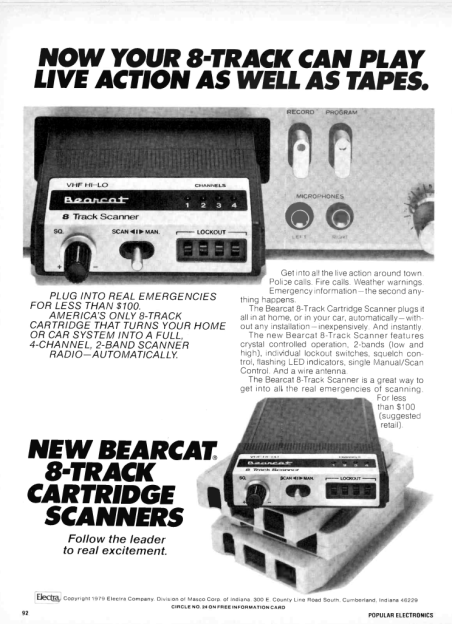 The ad copy says you can turn your 8-Track player into a 4-channel, 2-band scanner for under $100. Most likely, you needed a crystal for each channel. We aren’t sure where the power came from either, but the bottom says, “no battery required.” We suspect the tape mechanism moving must have spun a generator to power the device, but that seems exotic. There’s bound to be a place to plug in an external antenna, too, so presumably, you don’t mind a few wires and we would have guessed there was an external cigarette lighter plug.

Honestly, we wondered if this was one of those things that never came to market, but you can occasionally find them on sale for about $100 or so. You can find a picture at RigPix, too.

Of course, cassette AUX adapters were quite common, which fed audio from a phone or MP3 player into your tape heads. Same idea. There were also cassettes that were Bluetooth adapters, but all of those we know of took a tiny battery. We’ve seen those converted to 8-track, also. Want to see inside an 8-track? Not a problem.

But have you seen one of these in the flesh? Let us know.

46 thoughts on “Retro Gadgets: Tired Of The Beatles On 8 Track? Try The Police”