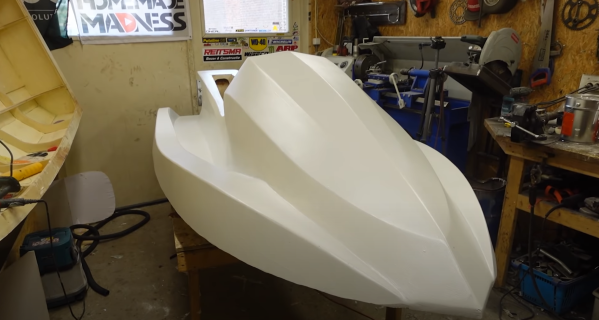 There is an age-old tradition among hackers of just making it yourself. Whether the real thing is too expensive or you think you can make a better one, the itch strikes, and it can quickly spread. [Homemade Madness] has quite the itch as he builds his own jetski.

What is a jetski but a boat with a shell on top? In an earlier video, he created a boat out of plywood and, after the usual steps of fiberglass and sealing, was proud to float around in his relatively normal-looking boat. But now that he had a working bottom, it was time to return to CAD. He printed out templates for all various shapes he would need, each labeled with a different designator, and glued them to the plywood. No fancy CNC here, just a steady hand and a jigsaw. We love the professional build instructions he compiled for himself that detail in LEGO-like quality exactly how each piece slots into where and in what order to do them. In addition to the top layer of the jetski, he also designed a stand for the boat to rest on while he made it, which is just going the extra mile. A ceiling-mounted winch made it easy to lift the ship into position. Next, he connected all the various framing pieces with PU glue. Thin plywood acted as cladding on top of the skeleton. Filling, sanding, and fiberglass overlaid the structure, making it waterproof. More sanding and some primer later, and it was ready for another water test.

He designed a version with an outboard motor, but he’s trying to build one with a built-in jet drive. So we’re looking forward to seeing the next step and him flying around on his custom watercraft. But what he has already done is quite impressive. If you’re looking for something a little smaller to pull you around the water, why not take a look at this little 3d printed tug boat? Video after the break.

END_OF_DOCUMENT_TOKEN_TO_BE_REPLACED

What can be accomplished with just a torch and compressed air? We can think of many things, but bringing a 17-foot-long marine shaft into ±.002 in tolerance was not on our list.

Heat straightening (PDF) utilizes an oxy-acetylene flame that is used to quickly heat a small section of a workpiece. As the metal cools, it contracts more than it expanded when heated, resulting in a changed volume. With skill, any distortions on a shaft can theoretically be straightened out with enough time (and oxy-acetylene). Heat straightening is commonly applied to steel but works on nickel, copper, brass and aluminum additionally.

[Keith Fenner’s] standard process for trueing stock is sensitive enough that even sunlight can introduce irregularities, but at the same time is robust enough to carry out in your driveway. However, even though the only specialty tools you need are a torch, compressed air and work supports, watching [Keith] work makes it clear that heat straightening is as much an art as it is a science. Check out his artistry in the video below the break. END_OF_DOCUMENT_TOKEN_TO_BE_REPLACED Call it a retirement plan, a hobby, or a beautiful expression of a mental imbalance, but [Doug and Kay Jackson] of Tulsa, OK are building a seventy-four foot steel sailboat in their backyard.

For the last few years, the couple has been working on the SV Seeker, a motor sail junk, since late 2011. They have a wonderful build log, but they’ve also gone the extra mile and documented the entire build process on video. Their YouTube channel is one of the best subscriptions you can have on the site, constantly updated with new portions of the build.

Yes, building an oceangoing ship in a landlocked state may seem like an ill-informed idea, but Tulsa, OK is the home of the port of Catoosa, about 400 miles and 20 locks from the Mississippi river, then another 600 miles to the Gulf of Mexico and the open ocean.

Below you can find some of the highlights of [Doug] and [Kay] fabricating the prop for their ship. First, a pattern was created with a CNC machine, then a mold was made to cast each blade in brass. It’s an impressive bit of work putting all these tools together, and you really get a sense of the challenge of building something this big.