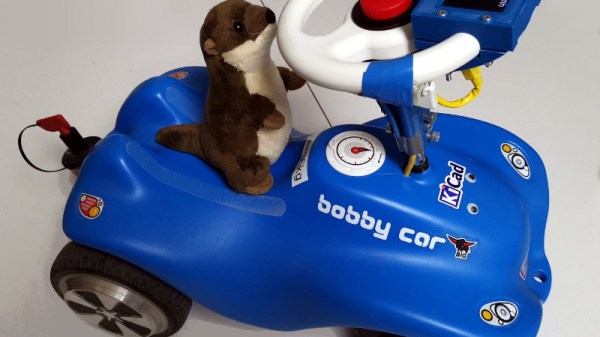 If you’ve spent any time at one of the larger European hacker camps over the last few years you’ll have seen the invasion of little electric vehicles sporting hoverboard motors as an all-in-one propulsion system. German hackers, in particular, have incorporated them into the iconic Bobby Car children’s toy, and ca be seen whizzing around looking slightly incongruous as adults perched on transport designed for five-year-olds.

[Peter Pötzi] has created just such an electric Bobby Car, and his one is particularly well-executed with a 3D-printed steering column extender and four motors for full 4WD rather than the usual two. A steering wheel-mounted display has a neat enclosure, and is fed SPI from the ESP32 that runs the show via an RJ45 patch cable. Many of these builds use hoverboard motor controllers with hacked firmware, but this one instead takes a set of off-the-shelf VESCs. Control comes via a set of Xbox 360 trigger buttons mounted to the underside of the steering wheel.

The result is typically self-contained as are all the Bobby Car builds, with the added bonus of the extra power of four motors rather than two. We’re not so sure that 4WD gives it off-road capabilities though, but having seen these vehicles perform some nifty maneuvers in the past perhaps it’ll lend extra traction on corners.