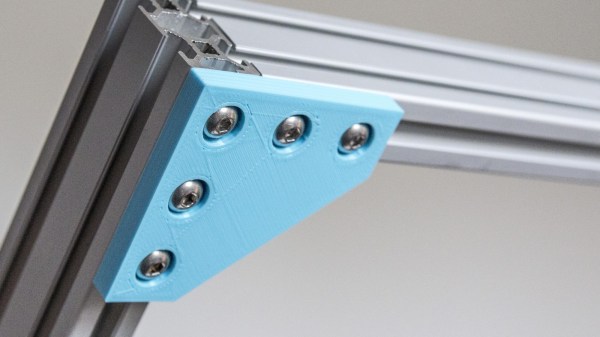 Aluminum extrusions are a boon for mechanical assemblies, but they require a stock of brackets and other hardware to be kept on hand. [mightynozzle] has decided to make things a little easier for prototyping and low-stress assemblies by creating a collection of 3D printable brackets for aluminum extrusions. 3D printing your own bracket hardware means faster prototyping, and if the assemblies don’t need the extra strength and rigidity of metal brackets you can just stick with the 3D printed versions.

The files are on Thingiverse, and include STL files of common brackets as well as an OpenSCAD script for customizing. Not familiar with OpenSCAD? No problem, we have a quick primer with examples.

This project showcases two things well. The first is that while brackets are not particularly expensive or hard to obtain, it can still be worth 3D printing them to reduce the overall amount of hardware one needs to keep on hand to make prototyping faster. The other is that 3D printing can shine when it comes to the creation of things like brackets: a few dimes’ worth of plastic can be turned into precise yet geometrically simple objects that would be a pain to make by other means. It certainly beats sitting on one’s hands waiting for parts to be delivered.

The somewhat regular Hardware Developers Didactic Galactic was a few days ago in San Francisco. Here’s the video to prove it. Highlights include [James Whong] from Moooshimeter, the two-input multimeter, [Mark Garrison] from Saleae, and a half-dozen other people giving talks on how to develop hardware.

[Taylor] made a portable NES with a retron, a new-ish NES clone that somehow fits entirely in a glop top IC. The controllers sucked, but [Taylor] made a new one with touch sensors. All that was required was eight transistors. The enclosure is an Altoid tin, and everything works great.

Here’s a YouTube channel you should subscribe to: Ham College. The latest episode covers the history of radio receivers and a crystal radio demonstration. They’re also going through some of the Technical class question pool, providing the answers and justification for those answers.

[Prusa] just relaunched prusaprinters and he’s churning out new content for it. Up now is an interview with [Rick Nidata] and his awesome printed container ship.

The tip line is overflowing with ESP8266 breakout boards. Here’s the simplest one of them all. It’s a breadboard adapter with stickers on the pin headers. Turn that into a right-angle breadboard adapter, and you’ll really have something.

Here’s something that’s a bit old, but still great. [Dillon Markey], one of the stop-motion animators for Robot Chicken modified a Nintendo Power Glove for animation duties. It seems to work great, despite being so bad. Thanks [Nicholas] for the link.

[David] the Swede – a consummate remote control professional we’ve seen a few times before – just flew his tricopter in a mall so dead it has its own Wikipedia page. Awesome tricopter, awesome location, awesome video, although we have to wonder how a few really, really bright LEDs would make this video look.

Here’s an item from the tip line. [Mark] wrote in with an email, “Why do you put names in [square brackets] in the blog entries? Just curious.” The official, [Caleb]-era answer to that question is that sometimes people have bizarre names that just don’t work in text. Imagine the sentence, “[12VDC] connected the wires to the terminal” without brackets. The semi-official answer I give is, “because.”

If there’s one thing about Python that’s slightly disconcerting, it’s the complete lack of braces, or as they’re called in American English, suspenders. A feature of every variety of C, Java, PHP, Perl, and a whole bunch of other very powerful languages, braces make things more legible and don’t rely on precise indentation. [Ruby] and [Eran] have come up with a way to use these punctuation marks with Python in a project they call Python with Braces.

As its name implies, Python with Braces doesn’t care about indentation: you’re free to make you code extremely ugly, or write your code properly in K&R style. Each line is terminated in a semicolon, and blocks of code with only one statement don’t require curly braces, just like C and Java.

Right now [Ruby] and [Eran] have a Windows installer with an OS X package on its way. Executing a Python with Braces script only requires executing it with a ‘pythonb’ executable instead of the normal ‘python’ executable.