With the holidays over, many of us are braving the elements to take down all those holiday lights. LED lights have largely taken over the market, but in some places, you can still get classic incandescent bulbs. There are some effects that LEDs can’t quite mimic yet. One of those is the magic of “twinkling” light sets, which [Alec Watson] explains in a Technology Connections video. Everyone has seen bulbs that flash, and strings that dim. But the twinkle effect until recently has been hard to describe.

Typical flashing bulbs use a bimetallic strip. As the filament of the bulb heats up, the strip bends, opening the circuit. Then the strip cools and closes the circuit again. Twinkling lights do exactly the opposite. The bimetallic strip shorts the bulb out rather than open the circuit. Twinkling sets also use a lot of bimetallic strip bulbs – typically every fifth bulb has a strip. The result of the bulbs being shorted out is that all be the bulbs in set see a higher voltage. This makes the entire strip shimmer in time with the flashing. That’s where the twinkling magic comes from.

It occurs to us that the voltage on the strip would be a great source of random seeds. Sure, you’d have to replace bulbs now and again, but how many people can say they get their random numbers from a set of Christmas lights?

If you’re curious how incandescent Christmas lights can blow and not take out the whole strip, check out this article about anti-fuses.

END_OF_DOCUMENT_TOKEN_TO_BE_REPLACED

Seventy cents doesn’t buy you a lot these days. Maybe some sweets or candies at most. How about a string of LEDs that you can use to decorate your home during the festive season? [Amaldev] was curious to know what was, or wasn’t, inside these blinky LED strings which made them so cheap. He’s done a Christmas LED Light Teardown and shows how blinky LED string lights can be built with the bare minimum of components.

The string he purchased had 28 LEDs – seven each in four colors, a controller box with one push button and a  power cord. Without even knowing what is inside the controller box, the cost of the product seems astonishing based on this BoM. The single push button cycles through eight different light patterns for each press. It even has a faux CE mark for the supply plug. Cracking open the case, he finds that the controller board is sparsely populated with just seven through hole components and a COB (chip on board) module. A simple, 8-bit, 8-pin microcontroller is possibly what controls the device.

[Amaldev] sketches out a schematic to figure out how it works. There are two arms with 14 LEDs of alternating colors, each of which is controlled by an SCR. Two GPIO output pins from the COB control the gates of each of these SCR’s. The button is connected to a GPIO input, and a second input is connected to the AC supply via a current limiting resistor. Most likely, this is used to determine the zero crossing of the waveform so that the COB can generate the appropriate trigger signals for the gate outputs.

It is unlikely that these products are manufactured using automated processes. The PCB production could be automated, but soldering all the wires, fitting it all in the enclosure and preparing the LED string itself would require manual labor. At US$ 0.7 retail on the street, it is difficult to imagine the cost breakdown even when the quantities are in large numbers. Maybe a combination of cheap components, recycled or rejected parts (mains cord/enclosure), lack of safety and protection measures (no fuses, no strain reliefs) and reducing the component BoM to an absolute, bare minimum, coupled with very high volumes lets them pull it off? What are your thoughts – chime in with comments.

As [Medhi] was setting up his Christmas tree, he found a string with a few broken lights. Because he’d bought a cheap string of lights wired in series, of course one bulb was burnt out, rendering the entire string useless. His original game plan was to search through the entire strand for the broken bulb, but that’s the easy way out. His backup plan was to zap the broken bulb out of the string. After a few hours of figuring out what that meant, he came up with a way to fix a broken string of lights.

When a bulb burns out, the filament breaks creating an argon gap between the two electrodes. By sending a huge voltage down the string, it should fire an arc through that gap, illuminating the burnt-out bulb for a brief time.

Experiments with socks and low humidity commenced, but it wasn’t until [Medhi] stuck his finger in a lighter that he found a better source of high voltage sparks. [Mr. Brows] connected the piezoelectric element to the plugs on his string of lights and… nothing happened. At least until he plugged the lights back in. Then, strangely, they worked. The reddit thread for the video says this behavior is due to an anti-fuse built into the bulb. When enough voltage goes through this anti-fuse, a thin sheet of insulator breaks down and allows dead bulbs to short themselves.

Hackaday head honcho [Mike] just got this method of finding dead Christmas lights to work, replacing 14 bulbs in a string of 100 lights. This leads us to an interesting question: why isn’t this simple method of fixing a string of Christmas lights common knowledge? You would think something this useful wouldn’t be introduced to the world via a YouTube video where someone  repeatedly burns and shocks himself. You can, of course, buy something that does the same thing, but this is far too simple of a solution for a classic problem to pass under our noses for this long.

END_OF_DOCUMENT_TOKEN_TO_BE_REPLACED 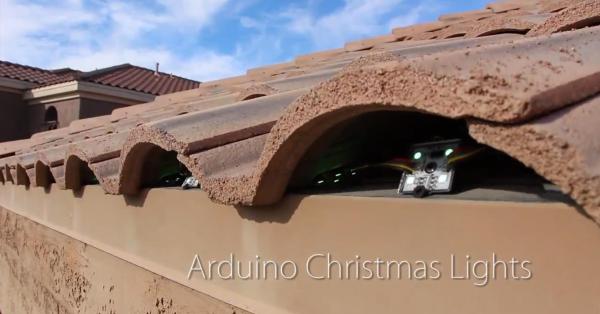 Here’s a cool hack to get you in the December holiday mood! Arduino controlled Christmas lights!

It all started because [Anx2k] had some leftover LED’s from one of his other projects, so he decided to make use of them as permanently mounted Christmas lights. He’s installed them underneath his tiled roof, and run all the wires into his attic where he has an electrical box serving as the main control hub. He uses an Arduino Uno to control them, and a 460W computer power supply to provide the juice. The LED modules themselves are Adafruit RGB pixel strings. There’s actually three of the LED modules per tile — two shining up to illuminate the tile, and one shining out.

He’s set up a ton of different patterns to run, and they are pretty awesome! Check out the video after the break.