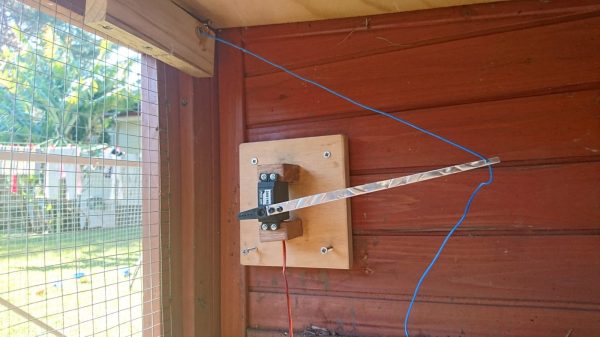 Most chickens are pretty good at putting themselves to bed when the sun sets, and [Eddy]’s chickens are no exception. But they’re not terribly thoughtful about closing up after themselves, so he set about on a long-term project to automate the door of their coop.

An open door overnight leaves chickens and their food vulnerable to predation. Rather than handle the chore manually and risk one forgetful moment that could wipe out his flock, [Eddy] used a servo to power the door and an Arduino to control it. To keep track of bedtime and wakeup, a Raspberry Pi looks up the local civil dawn and twilight times online and tells the Arduino when the moment is at hand. The Pi cleverly caches the times for use the next day in case the WiFi connection is down, and also provides a web interface to check on the door’s status and manually override the cycle. Result: safe, happy chickens.

If all this seems a bit much for a simple job, [Eddy] agrees. But he’s using this as a testbed to develop a home automation framework that can be retasked at will. Sounds like he’s on the right track to us, but for more IoT animal husbandry tips, he’ll want to check out this small farm automation effort.

END_OF_DOCUMENT_TOKEN_TO_BE_REPLACED The cab of the truck serves as the hen-house. It’s made of marine grade plywood held together with glue and galvanized nails. The exhaust stacks, which are made of PVC pipe, are not just decorative. They are chutes for the feed trays to either side of the blue ramp (you can’t really see the trays in this image). To give the chickens a way to stretch their legs he brought his welding skills to bear. The trailer portion of the build is a welded metal frame covered in mesh which provides a rather large exercise yard. Since the habitat is enclosed there’s really no need for an intricate motorized door. [Dino] didn’t want to keep the baby chickens cooped up when he was at work, but he didn’t want them to escape, or become a juicy treat, either. His solution was to build this chicken tractor. It’s a complete chicken ecosystem with wheels, kind of like a double-wide trailer for our feathered friends. On one end is a small coop that contains food, water, and an incandescent light bulb for heat. The other end is a chicken-wire box that lets the young birds stretch their legs and get some fresh air.

It’s easy to see the wheels which flip down when [Dino] needs to move the contraption. Like we said, he puts it out when he goes to work, selecting different parts of the yard so that the grass gets evenly fertilized. It’s a nice solution if you don’t have enough area to dedicate to an automated chicken coop.

We’ve embedded [Dino’s] video after the break. He covers the beginning and end of the build, and fills the middle of the video with a time-lapse recording of the construction process.

END_OF_DOCUMENT_TOKEN_TO_BE_REPLACED [Fileark] has been busy with the hacks lately. This time around he’s built a solar-powered chicken coop door that opens in the morning, and closes at night. A single motor slides the door open and closed using a loop of spring-loaded string. There are limiting switches on either side of the door jamb to ensure proper positioning. The grey box seen above houses the hardware; a regulator for the solar panels perched atop the roof line, a battery from a broken UPS, and the driver board itself. An AVR chip running the Arduino bootloader monitors a phototransistor to detect sunup and sundown, driving the door motor appropriately using a pair of relays.

Check out the demonstration and hardware overview after the break. [Fileark] was inspired to build his after seeing the alarm-clock coop door. We don’t know if he got a chance to look at the vertical coop door, but we think his less mechanically-complicated solution is just as elegant.

END_OF_DOCUMENT_TOKEN_TO_BE_REPLACED Waking up at 5:30 in the morning. [Mark Stead] didn’t like the idea either when his chickens started crying to be let out. One simple solution obviously is to eat the chickens build an automatic door opener. The mechanism starts out with an old style mechanical alarm clock, add a geared motor with some creative switch work to pull open the door, weather proof the entire thing, and done. [Mark] even modified the setup later to work with vertical doors. No MCU required for either.

Pair this with an automated feeder system, egg gathering and cooking setup, and you’re half way to having your breakfast ready for you when you wake up in the morning – around noon like the rest of us.

Here’s a pretty cool implementation of an automated door, built for a chicken coop. The electronics are fairly standard, an Arduino and a used cordless drill. The end product will be not only wireless, but automated based off of ambient light as well.  We also found the locking mechanism quite elegant. He also supplied a link to another automated chicken coop door which has a decent writeup with schematics and such. Next, he’ll have to automate their feeding as well.