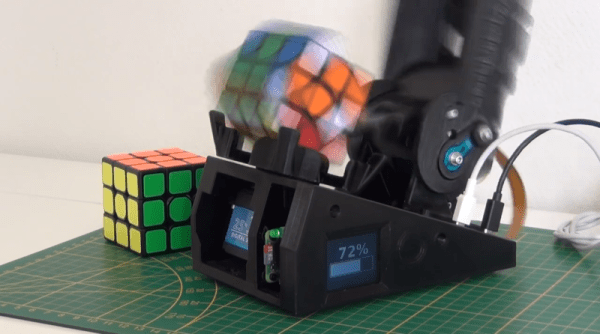 [AndreaFavero] says that the CuboTino emphasizes simplicity and cost-savings over speed. However, solving the puzzle in about 90 seconds is still better than we can do. The plucky solver uses a Pi and a camera to understand what the cube looks like and then runs it through a solver to determine how to move.

Watching the video below, we were impressed with the mechanics. The titled surface solves a few problems and makes manipulation easier. The way the mechanics are arranged, it only takes a pair of servos to flip the cube around as you like. END_OF_DOCUMENT_TOKEN_TO_BE_REPLACED 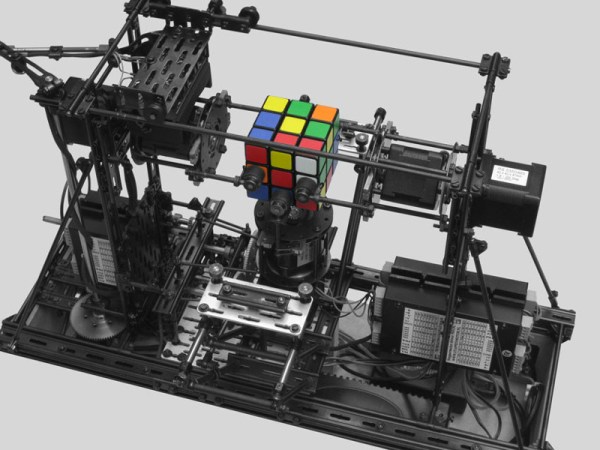 We love a good Rubik’s Cube solver and the mechanical engineering on this one is both elegant and functional.

This is the first time we remember hearing about the FAC system, which is a standard set of parts which can be used to make any number of mechanical systems. [Wilbert Swinkels] must be a master with the system; the layout of the machine appears simple and uncrowded despite the multiple degrees of freedom built into it. Those include an insertion platform for getting the cube in and out, a gantry for three color sensors, and two axes (three grippers in all) for doing the actual solving. If you’ve used FAC before we want to hear what you think of it in the comments.

[Maxim Tsoy] handled the software which runs on a Rapsberry Pi Compute module. You’ll want to watch the demo video below. First you place the randomized cube on the insertion platform which retracts after the cube is in the grasp of the grippers. These work in conjunction with the color sensor gantry to scan every side of the cube. After a brief pause to compute the solution the grippers go to work.

It is possible to build a solver with just two swiveling grippers. Here’s a really fast way to do it.

END_OF_DOCUMENT_TOKEN_TO_BE_REPLACED

A team of five UC Berkeley engineering built this impressive Rubik’s Cube solver. The CuBear is a giant transparent cube with a servo attached to each face to rotate the cube’s six faces. The user can either scramble the cube using computer controls or show the faces of a scrambled cube to the onboard webcam, and the machine will replicate it. While scrambling the cube may take many moves, the computer calculates the shortest number of moves to solve the cube before proceeding. Team member [Dan Dzoan] is quite a fast solver himself, as you can see at the end of BotJunkie’s video embedded below. END_OF_DOCUMENT_TOKEN_TO_BE_REPLACED