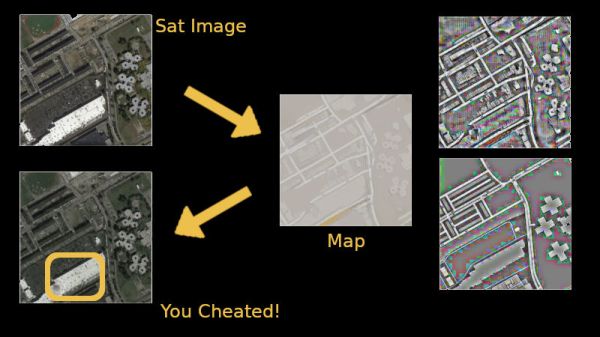 AI today is like a super fast kid going through school whose teachers need to be smarter than if not as quick. In an astonishing turn of events, a (satelite)image-to-(map)image conversion algorithm was found hiding a cheat-sheet of sorts while generating maps to appear as it if had ‘learned’ do the opposite effectively[PDF].

The CycleGAN is a network that excels at learning how to map image transformations such as converting any old photo into one that looks like a Van Gogh or Picasso. Another example would be to be able to take the image of a horse and add stripes to make it look like a zebra. The CycleGAN once trained can do the reverse as well, such as an example of taking a map and convert it into a satellite image. There are a number of ways this can be very useful but it was in this task that an experiment at Google went wrong.

A mapping system started to perform too well and it was found that the system was not only able to regenerate images from maps but also add details like exhaust vents and skylights that would be impossible to predict from just a map. Upon inspection, it was found that the algorithm had learned to satisfy its learning parameters by hiding the image data into the generated map. This was invisible to the naked eye since the data was in the form of small color changes that would only be detected by a machine. How cool is that?!

This is similar to something called an ‘Adversarial Attack‘ where tiny amounts of hidden data in an image or other data-set will cause an AI to produce erroneous output. Small numbers of pixels could cause an AI to interpret a Panda as a Gibbon or the ocean as an open highway. Fortunately there are strategies to thwart such attacks but nothing is perfect.

You can do a lot with AI, such as reliably detecting objects on a Raspberry Pi, but with Facial Recognition possibly violating privacy some techniques to fool AI might actually come in handy.

Ever since Google’s Deep Dream results were made public several years ago, there has been major interest in the application of AI and neural network technologies to artistic endeavors. [Helena Sarin] has been experimenting in just this field, exploring the possibilities of collaborating with the ghost in the machine.

The work is centered around the use of Generative Adversarial Networks, or GANs. [Helena] describes using a GAN to create artworks as a sort of game. An apprentice attempts to create new works in the style of their established master, while a critic attempts to determine whether the artworks are created by the master or the apprentice. As the apprentice improves, the critic must become more discerning; as the critic becomes more discerning, the apprentice must improve further. It is through this mechanism that the model improves itself.

[Helena] has spent time experimenting with CycleGAN in the artistic realm after first using it in a work project, and has primarily trained it on her own original artworks to create new pieces with wild and exciting results. She shares several tips on how best to work with the technology, around the necessary computing and storage requirements, as well as ways to step out of the box to create more diverse outputs.

Neural networks are hot lately, with plenty of research going on in the field. There’s plenty of fun projects, too – like this cartoonifying camera we featured recently.