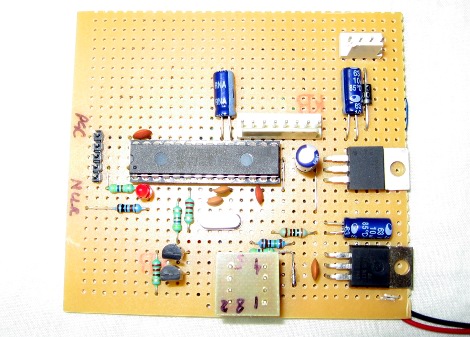 [Debrah] is taking his next project out to the garage. He built his own CAN bus reader using a dsPIC.

The nice thing about working with Control Area Network is that it’s a universal standard found on every modern production line automobile. And because of this, the chip you need in order to communicate using that protocol will cost just over a dollar. [Debraj] chose the MCP2551, which comes in several different 8-pin packages. There is even an application note tailored for use with the dsPIC33F family.

The project is running on both 5V and 3.3V rails. This complicates things just a bit, but a level converter makes sure that there’s no communications problems between the chips. A four line character LCD acts as the output during the tests (you can see this in the clip after the break) but he’s already got a second version which looks quite a bit better on the dashboard.

What else can be done with this hack? Well, we’ve seen a method used to read control buttons from the steering wheel before. It all depends on what data your vehicle is transmitting and one way to find that out is to build some hardware and start logging the packets. END_OF_DOCUMENT_TOKEN_TO_BE_REPLACED

We touched on harmonic table MIDI controllers when [aris] was building one. [Ken Rushton] has one of C-Thru’s commercial keypads, the AXiS-49, and disassembled the device to show how it works. A PIC18F2450 microcontroller provides the USB interface and is connected to a dsPIC33FJ128GP310 digital signal controller which decodes the keypresses. The membrane buttons are made with two concentric graphite disks that touch gold contacts. The microcontroller measures the time between the two points contacting to determine the button velocity. monome button clones also use circular contact pads, but cannot calculate velocity because they only have one element.