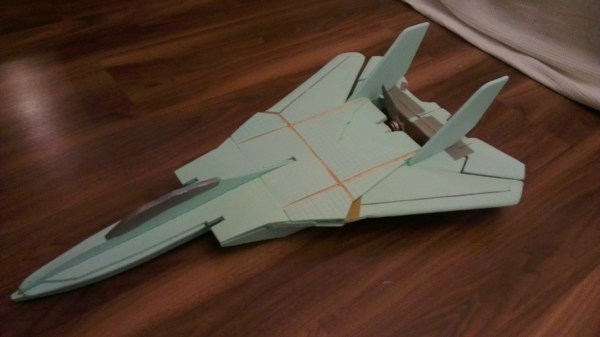 Anyone can build a remote control airplane with a sheet of foam, some glue, and a handful of servos. Building an F-14, complete with the swing wing mechanism? [Thomas] found built one that’ll take you right into the danger zone.

This was [Thomas]’ first go at scratch building a RC airplane, and wanted a lot of electronics inside. His choice of airframe was the venerable F-14 Tomcat, complete with wings that swing out for landing and swing in for high-speed flight. This isn’t just taking off-the-shelf receivers and putting them in a fancy airframe, either: [Thomas\ is reading the PWM signals from the receiver with a small electronics board, mixing the elevons with his own code, and implementing an auto stabilization system with an accelerometer.

Most of the work on the airframe was done by [Maybz] over on the RCGroups forums. That’s an impressive thread spanning seven years of posts. [Thomas] doesn’t see his F-14 as an end goal, though: he’s using this as a stepping stone to learn about building unstable planes for a more complex UAV.

Videos below, with a warning to headphone users.